A Fraction of the Whole by Steve Toltz

A Fraction of the Whole is Sydney author Steve Toltz’s sprawling début. Wearing its misanthropic heart uproariously on its sleeve, Fraction is a long father-and-son tale that traverses continents and nods to countless literary forebears on its way.

James Wood coined the term ‘hysterical realism’ as a criticism of Zadie Smith’s White Teeth (2000), saying that ‘stories and sub-stories sprout on every page’. This is true of Fraction, but Wood’s critique of hysterical realism is that it fails to move, and that is not the case here. With its countless far-fetched sub-plots, A Fraction of the Whole is essentially a baggy comic yarn, but in it Toltz explores the deepest questions of selfhood and the dirty machinations of society. If anything, the elevation to the ridiculous makes the moments of reality more affecting.

But you do need to suspend your disbelief. Jasper reveals at the start that his father and uncle are, in turn, the most despised and most adored men in Australia. He isn’t exaggerating: there is plenty to like and dislike. Jasper explores his own life while conveying the story of the brothers, whose differences are reflected in, and reinforced by, every decision they make. While one accelerates towards but escapes death, the other quakes in fear of it.

Jasper’s uncle, Terry, is born while Martin, Jasper’s father, is in a coma. When Martin finally wakes up, the brothers are in many ways the antithesis of each other. Terry becomes a hero the way Australians do: he is a dazzling sportsman cum criminal with a folk-hero bent (he targets dishonest sports stars). Martin, on the other hand, is a philosopher struggling with depression. From there, it is a crazy ride with deviations in every possible direction: characters build a labyrinth, publish ‘The Handbook of Crime’, manage a strip club, make millionaires out of regular citizens, and so on. The plot is too full for a neat summary. Although Terry is a central character, it is Jasper and Martin’s ongoing struggle to accept and understand each other that underpins the story.

Toltz’s writing is packed with brilliant images, followed by droll asides: ‘then he did an exaggerated dash from the classroom like a cartoon tiger. People act like children when you surprise them, and bastards are no exception.’ Both the plot and the writing’s combination of cheek and originality is refreshing. Toltz, clearly in love with language, has built each paragraph for entertainment value. It is not simply a case of reading to find out what happens next.

Notwithstanding that, at one point Jasper, busy writing the memoir that is this tome, admits, ‘I like white pages – they shame me into filling them.’ One suspects this is true of the author. There is a lot to get through; as with the child who relates the day’s events before pausing for a drink, the ending dilutes the energy of the first half. Its unrelenting pace, together with a jokey sensibility, culminates in a lack of intimacy, and there are times when it is difficult to empathise with the characters.

Grown children can end up sounding like their parents, and Jasper and his father, who narrate different sections, have such similar voices that it lends sections of the book a tonal flatness they wouldn’t otherwise have. This is largely forgotten, though, when taking into consideration the entirety of A Fraction of the Whole, whose voluminous madness evokes Laurence Sterne’s Tristram Shandy (1759–69) and even David Foster Wallace’s Infinite Jest (1996), and whose momentum is reminiscent of Kurt Vonnegut. For trainspotters, in a way somewhat analogous to Marisha Pessl’s Special Topics in Calamity Physics (2006), there are many bookish references to enjoy, since Martin ingested the countless books his mother patiently read to him during his coma. Frustratingly, we don’t get much of a sense of Martin’s mother, and in general the women are not as vividly drawn as the men, even taking into account the fact that they have smaller parts. Love-interest Caroline, particularly, is hard to gain a clear sense of; she seems like a different person by the end of the novel.

However, what endures is a sense of the magnitude of the book – in volume, ambition, and impact – and the many different scenes that create the overall composition, each memorable, in distinct ways. In one of the funnier plot divergences, Martin is attempting to get a book published but having little success, which Toltz uses to wisecrack about Australia’s publishing industry. Martin recounts spending days in publishers’ waiting rooms; on one of these occasions, he swaps manuscripts with another prospective writer and when they finally hand them back they just look at their watches, unimpressed. The book teems with such vignettes.

A Fraction of the Whole has an international passport, with settings in France and Thailand as well as in Australia, but its sense of humour is unequivocally Australian, and the issue of what it feels like being an Australian, and living here now, is echoed throughout the pages. ‘Living in Australia is like having a faraway bedroom in a very big house.’ Peppy dilettante philosophising is crammed in, too: ‘if you could save the person from ever having another splinter in her finger, you’d run around the world laminating all the wood with a fine, transparent surface, just to save her from that splinter. That’s love.’ A Fraction of the Whole tries to get away with so much, and for the most part it succeeds. It is charmingly funny, it is bold and audacious, and it announces an exciting new talent. 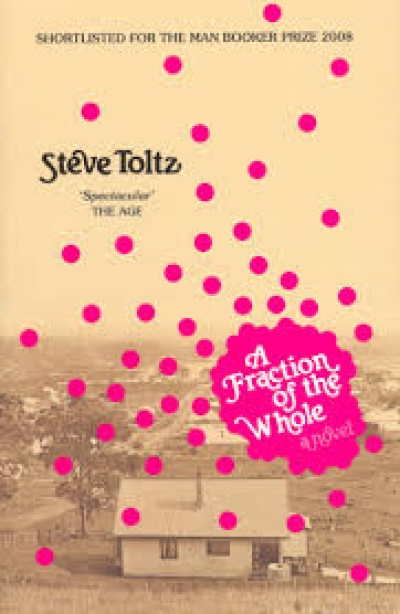 A Fraction of the Whole