The Book Thief by Markus Zusak

The Book Thief marks a departure for Markus Zusak. It is his first novel for adults, has broader concerns than his earlier work, and makes clearer his ambitions to be considered a serious writer. His first three novels, for young adults, were primarily focused on the masculinity of the boys in a working-class Sydney family. His next book, The Messenger (2002), foreshadowed the development we see in The Book Thief. Presented for young adults, The Messenger could easily have been marketed as a ‘crossover’ novel. It took Zusak into new and strange territory with a story about a young man mysteriously chosen and directed to intervene in other people’s lives.

In The Book Thief, Zusak abandons contemporary Australia for World War II Germany. In doing so, he inevitably signals his intention to raise those intractable existential questions that go along with writing fiction about Nazi Germany, its treatment of Jews, and its bombing by the Allies. He signals his intention even more obviously by using an anthropomorphised and almost passive Death as a narrator, and having Death address the reader to tell us that this story is one of a ‘small legion’ he carries, ‘each one an attempt – an immense leap of an attempt – to prove to me that you, and your human existence, are worth it’. You can’t get much more thematically ambitious than this, although perhaps we shouldn’t take Death’s ambition as equivalent to Zusak’s. According to the tenets of postmodern fiction we are alerted to the constructed nature of narrative, and here is the other theme of the book, the nature and importance of books, words, reading and writing.

The conceit of the narrative is that Death has rescued the book containing the autobiographical writing of the young Liesel Meminger, the book thief. Liesel and her brother are to be given up by their mother and fostered out, but on the way to their new home her brother dies. At the cemetery where he is buried, Liesel scavenges a book the apprentice gravedigger has dropped, The Gravedigger’s Handbook. Illiterate, Liesel can only understand the book as a talisman. It reminds her of the last time she saw her brother and mother. But with the help of her foster father, she learns to read, and gradually books and words become ‘everything’. A few years later, with the war at its peak, Liesel begins to write a memoir, an act that literally saves her life.

Apart from the tenacious Liesel, The Book Thief is almost exclusively peopled by characters destined to die within the pages of the book. Death warns us of their fate: ‘Mystery bores me. It chores me. I know what happens and so do you. It’s the machinations that wheel us there that aggravate, perplex, interest and astound me.’ It is these machinations that form the story that Death relates, as he overtly chooses how to order the telling.

These doomed characters are mostly the inhabitants of Molching, the small town near Munich where the Hubermanns, Liesel’s foster parents, live. They are variously committed, indifferent and resistant to the Nazi regime. But the other main character is Max, a Jew who seeks and is given refuge with the Hubermanns, to honour an old promise. Both Max and Liesel are ravaged by nightmares, are scrappy fist-fighters, and are beholden to books and writing. They form a deep bond in the fictional world that they inhabit and are counterbalances to each other in the narrative.

Despite the obvious differences, there is much in common between Zusak’s previous work and The Book Thief. His first four books were more literary than much writing for young adults, and the essence of Zusak’s prose style has remained the same: at once muscular and poetic. Sentences are often short but are structurally plain or complex. Zusak enjoys inventive language use and delights in describing the world on a slightly skewed angle. While for the first time his primary character is female, his interest in masculinity is also still evident, if secondary, through the character of Liesel’s adoptive father, the caring and moral Hans Hubermann (surely it’s not a coincidence that his name sounds similar to Übermensch). The ‘brute strength of the man’s gentleness’, a typical Zusak paradox of masculinity, is the basis of Liesel’s strong relationship with Hubermann. So with these similarities, is the new work definitively a book for adults? Rights have been sold in the US to the children’s division of Knopf at Random House rather than to an adult publisher. But the grander scope surely justifies the Picador imprint of Zusak’s Australian publisher, and the adult tag.

It is easy to wring emotion and narrative drive from this grander scope, the raw suffering of World War II and the Holocaust. It is harder to create something more substantial. Markus Zusak goes well beyond the superficial, at least partly due to his prose style, but there are depths that remain just beyond his reach.

Lorien Kaye is a freelance writer and reviewer, and a former editor of Australian Bookseller & Publisher. 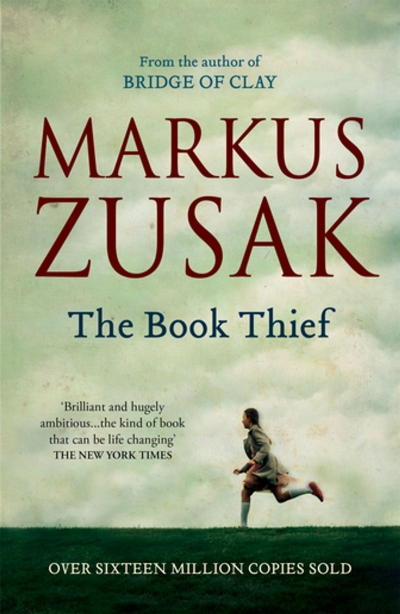