Lucy Kirkwood, the present darling of the British critics, is a playwright who is not afraid of tackling momentous subjects. Her most recent play, The Children (2016), is a post-nuclear apocalyptic chamber piece which explores the responsibility of the baby boomer generation to those who come after. Her new play, Mosquitoes, to be presented by the National Theatre in July 2017, apparently deals with two sisters and the Large Hadron Collider – Chekhov meets Stephen Hawking. Chimerica, a neologism originally coined by Niall Ferguson and Moritz Schularick, is about the convoluted relationship between China and the United States. The play opened in London in 2013 to uniformly ecstatic reviews and won practically every award going. The response when it was performed in the United States was considerably less enthusiastic, and I imagine it will be a long time before it gets a production in China.

Chimerica is a branching out from Kirkwood’s earlier work, which includes a powerful depiction of sex trafficking with a title the length of which might earn it a place in the Guinness Book of Records, It Felt Empty When The Heart Went At First But It Is Alright Now (2009), and a slight but wittily trenchant exploration of the objectification of women, NSFW (2012), which Red Stitch presented in Melbourne in 2013.

Clocking in at roughly three hours with a huge cast, and moving rapidly between the United States and China in 1989 and the present, there is nothing slight about Chimerica. The play revolves around the iconic image of the young man holding two shopping bags and confronting a column of tanks in Tiananmen Square the day after the massacre of 4 June 1989. Twenty-three years later, Joe Schofield, the fictional young photojournalist who took the picture, is led to believe that the man who stopped the tanks is still alive and in fact living in the United States; the play follows his quest to find him. Schofield persuades his editor that the story is worth pursuing and drags his friend, the sceptical reporter Mel, along with him. In the process he loses his job and Mel’s friendship. Schofield's girlfriend, the British market researcher Tessa, unwittingly betrays his closest Chinese companion Zhang Lin, and Schofield ends up selling his soul along with his photographs in a fashionable Manhattan gallery. 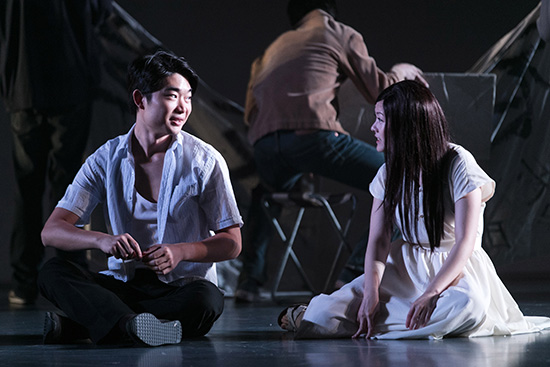 ABR Arts sides with the British critics. In an astonishing way, Kirkwood has taken a huge topic and turned it into a riveting thriller. It is true that the major Western characters seem to come from stock. We have seen the harassed editor, the idealistic, obsessive photographer, and the cynical journalist before. In fact, Kirkwood acknowledges this with a wry reference to Macarthur and Hecht’s The Front Page (1928). But Chimerica covers so much territory, contrasting the social, political, and economic aspects of the two countries, exploring the ethics of photo journalism, indeed of all journalism, highlighting the plight of undocumented aliens in America and throwing in a doomed love affair for good measure, that even with a running time of three hours there is not much room for character development. But Kirkwood’s punchy, witty dialogue gives the actors something to latch on to, and this cast certainly makes the most of it.

Kip Williams’s production is quite simply breathtaking. It is not just that he has choreographed the play superbly, with each scene flowing inexorably into the next. Of course, every director’s job is to support the text with their staging, but Williams’s work here amplifies Kirkwood’s already powerful creation to an extraordinary degree. To take an example: Tessa is given the eleven o’clock number, in this case a PowerPoint presentation to a credit card company in which she explains to her Western clients that anything China takes from the West will be absorbed and subverted into something rich and strange. The east is still inscrutable. Without giving too much away, Williams’s presentation of this scene sums up the whole tragic irony of a nation that has sacrificed freedom for economic development.

David Fleischer’s set, Renee Mulder’s costumes, The Sweat’s music, and above all Nick Schlieper’s lighting combine to present an experience that is as beautiful as it is engrossing.

The cast, augmented by NIDA’s Musical Theatre students, is faultless. Mark Leonard Winter imbues Joe with a vulnerability that allows the audience to empathise with an otherwise somewhat dislikable character and thus get caught up in his obsession. Brent Hill has fun with Mel, and Geraldine Hakewill is a strong presence as Tessa, exploring the ambivalence of a person who subjugates her social conscience to the demands of her career. 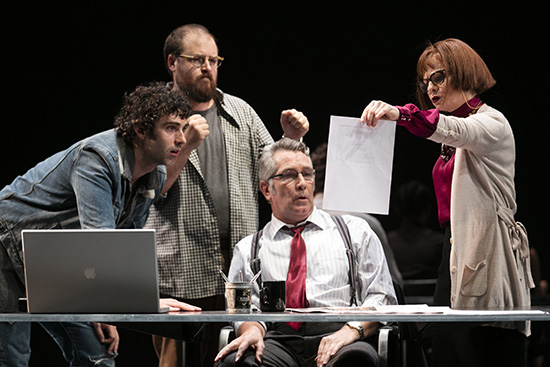 The moral centre of Chimerica is Joe’s Chinese connection, Zhang Lin. His naïve hopes for a free China crushed in Tiananmen Square, Zhang Lin now teaches English to the children of the nomenclatura, but his reforming spirit has not died and he attempts in vain to avenge the death of his neighbour, poisoned by Beijing’s toxic pollution. His quixotic attempt to publicise the government’s obfuscation of the pollution levels coupled with Joe’s thoughtlessly incriminating messages lead him to destruction. But even he is morally compromised. His implacable stand imperils his brother Zhang We, who loses his job and is forced to flee to the United States. Jason Chong makes a heartbreaking Zhang Lin.

Chimerica is a triumphant start to the nascent Kip Williams’s regime at the Sydney Theatre Company.