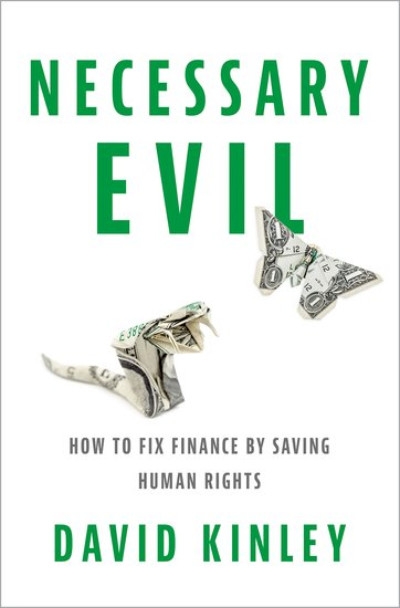 Necessary Evil: How to fix finance by saving human rights

Necessary Evil: How to fix finance by saving human rights, by David Kinley, a law professor at the University of Sydney, originates in the conclusion of his 2008 book looking at the social trade-offs of what he termed Civilising Globalisation. Kinley’s new book attempts to reconcile finance and human rights as a two-way process. Throughout the text, Kinley indeed betrays a somewhat reluctant respect and admiration for the complex functions exerted by finance in modern societies, yet he denounces the financial narcissism and exceptionalism perverting the contemporary human rights discourse. Kinley’s premise is that finance is a vital utility intended to serve society, not subvert it, especially considering that finance has such an extraordinary impact on ordinary lives. Kinley argues that finance’s redeeming features lie in the field of human rights, so much so that he metaphorically summarises his book as ‘the story of a relationship between two strange bedfellows intent to bear responsible economic stewardship through modern society’s heightened levels of rationality’.

This all makes eminent sense. However, the book’s core argument rests on vague philosophical grounds of social attitude, empathy, and capacity for change. What is missing throughout is a tighter analytical consideration of perspectives and proposals capable of significant paradigm shifts in the regulation of finance and human rights, such as those emerging in politics from alternative-right and radical-left circles,  as well as in economics from unorthodox technicians. For instance, more could have been said about the intriguing critique of fractional reserve banking, which has been widely discussed by economists since the 2008 global financial crisis, and has recently elicited a (defeated) Swiss referendum (the so-called Vollgeld, or sovereign money), even garnering the support of Martin Wolf, chief economics commentator of the Financial Times.

Giovanni Di Lieto teaches international trade law in the international business program at Monash University. His professional career developed as a global value chain specialist across the United States, Europe, and China. He is the author of Migrant Labour Law: Unfolding justice at work in free markets (The Federation Press, 2016).

Necessary Evil: How to fix finance by saving human rights

Giovanni Di Lieto teaches international trade law in the international business program at Monash University. His professional career developed as a global value chain specialist across the United States, Europe, and China. He is the author of Migrant Labour Law: Unfolding justice at work in free markets (The Federation Press, 2016).