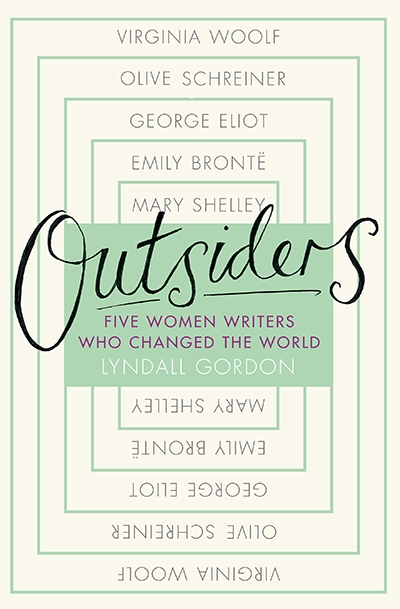 In 1787, at a time when literary culture was shifting from private patronage and coterie circulation into a new professionalism, the London publisher, bookseller, and journal editor Joseph Johnson offered the position of staff writer to Mary Wollstonecraft, who had already published Thoughts on the Education of Daughters (1787), the first of several books leading to Wollstonecraft’s being named Britain’s first feminist. Fully aware of taking a position hitherto occupied only by men, Wollstonecraft wrote to her sister Everina: ‘Mr Johnson assures me that if I exert my talents in writing, I may support myself in a comfortable way. I am then going to be the first of a new genus – I tremble at the attempt.’

The idea of a ‘new genus’ tracks its way through Outsiders, a group biography of the five women writers whom Lyndall Gordon sees as Wollstonecraft’s descendants – her actual daugher Mary Godwin (later, Mary Shelley), Emily Brontë, George Eliot, Olive Schreiner, and Virginia Woolf – who became well- established literary figures without having had the advantages given middle-class men, including access to institutions of learning. Gordon devotes a chapter to each, labelling them ‘prodigy’, ‘visionary’, ‘outlaw’, ‘orator’, and ‘explorer’, and providing fresh and lively literary biography along with acute critical commentary on their key fictional works as well as letters and journals.

Dorothy Driver is Professor of English at the University of Adelaide.

Dorothy Driver is Professor of English at the University of Adelaide.