As expected, the postal survey has produced a strong majority in favour of marriage equality. 61.6 per cent of respondents have voted Yes. A postal survey that few people wanted – a sop to bigots, reactionaries, and the prime minister’s enemies in his party – has endorsed the accuracy of numerous opinion polls. After a divisive and hugely expensive survey, the people have delivered an emphatic message. Like nearly all our key allies around the world, they have no problem with the notion that all adults should have the right to marry – not just some.

In the early days of the campaign, Australian Book Review was surprised by the despondency of many Australians, long inured to the illiberal and obfuscatory tactics of the far right and their friends in the media. With the first exit polls, the mood quickly changed to one of relief and resolve. People lobbied, debated, advertised, and – best of all – organised. Hundreds of organisations and companies (ABR among them) expressed unequivocal support for marriage equality. I spoke to a number of parents and grandparents who had exhorted their peripatetic children to make sure they voted. Alex Miller put it well when I invited him to endorse our open letter: ‘One very good, and unexpected, result of this public discussion is that those of us who knew ourselves to be one with the family of LGBTI now feel more openly a part of that union. Before this business, the togetherness was implicit, now, at least here in this community, it is a stated reality. And stronger, I think. People have stood up.’

Today there will be much euphoria in the LGBTI community – and beyond. Liberal-minded Australians will share our relief that a country almost pathologically averse to social change and reform for two decades has called time on intolerance, alarmism, and backwardness. As Peter van Onselen wrote in The Australian, ‘It took the public to do what politicians haven’t had the guts to do for years.’

That said, marriage equality will not be available until parliament legislates. It remains for our parliamentarians to endorse this reform without further delay or qualification. Enough is enough. Australians will not tolerate more furphies or procrastination.

Unexpectedly, 2017 may turn out to be a signal year for progressivism in this country. Marriage equality (inconceivable two decades ago) is all but a fait accompli. The New South Wales and Victorian state parliaments are close to legalising euthanasia (a right supported by an even more overwhelming majority of Australians, as revealed in countless opinion polls). Recently, the disgraceful limitation of the Namatjira copyright, to the exclusion of his family, has been resolved fairly and honourably.

Much was written during this campaign – some of it bigoted rubbish, but mostly thoughtful arguments on both sides. None spoke better sense than Michael Fullilove of the Lowy Institute, who reminded us that: ‘It is a foundational principle of democracy that all citizens should be treated equally. To depart from this principle requires a compelling reason. In the case of marriage, there is only an appeal to tradition. The naysayers ... stir up fear of change just as their counterparts did during the republic referendum campaign. Yet the sky did not fall in on America, Britain or France when they provided for marriage equality. Is Australia uniquely incapable of protecting marital freedom and religious freedom at the same time? How low an opinion of our country do the No campaigners have? To reject their tactics would also be to reject the negative politics that have held Australia back for a decade. If we can get this done, we may surprise ourselves with what else we can get done’ (AFR, 17 October 2017). 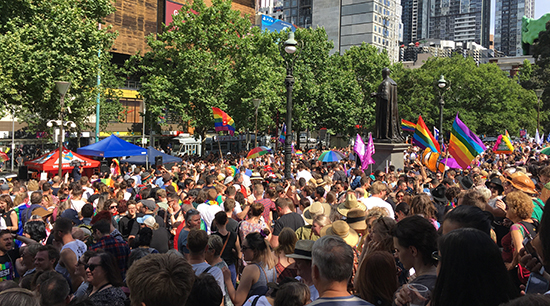 Celebrations at the State Library of Victoria (photograph by Peter Rose)

Now that Australia has rediscovered its reforming zest of the 1970s and 1980s, let us hope that the age of ‘negative politics’ is over and that we will see action on pressing issues such as climate change, Indigenous affairs, inequality, women’s rights, and the republic.

To paraphrase Diaghilev – and Michael Fullilove – let’s astonish ourselves!