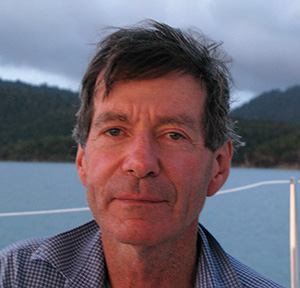 Through a love of words.

Awfully, but I was warned early not to put dreams in novels, at least nothing longer than half a line.

In the Australian bush, with eucalyptus bark crackling under my feet; or if I can’t be there, sailing tight on the wind in a small boat in New Zealand.

Last week it was Zach Clark’s Little Sister, about a novitiate who leaves her convent to go wild for a temporary good, then goes back into the order as calmly as a dove into a dovecote.

The Origin of Species, for its sense of drama through the character of Charles Darwin’s thinking on the page: an astonishing, simple man, telling the greatest story ever told and doing it while feeling inarticulate, not really up to it. But who else was there?

A writer with a love of farming, food, wine, and conversation – Eric Rolls, who died in 2007. He could pick the other two, otherwise there might be trouble.

‘Passion’ – just bring back ‘interest’ to replace it.

Shakespeare, the Big Bang of all books.

Joe in Loon Lake, and the character in several other E.L. Doctorow novels who is like him, lucky in life, wise in tragedy, smart as a whip, and still only at the start of life knowing nearly everything that the rest of us struggle to learn, if ever we do.

The moment I think of an answer I change my mind.

Music played anywhere in my hearing.

As friends. What a question!

It’s a valid concern of critics. But if you mean book reviewing, as long as the reviewer quotes from the book under review and describes it in its own terms, i.e. using the words of the author in quotation marks to give the feeling of it, great.

A privilege. Nothing is more humbling and gratifying to a writer than meeting a reader who has read their work, and this is where writers meet them, sometimes more than one, but if only one, hooray.

When they deserve to be, though sometimes only after a time lag.

Job not known to self until finished, I am sorry to say.

Roger McDonald’s first novel 1915: A novel of Gallipoli (1979) won the Age Book of the Year and was made into an eight-part ABC TV series. His novel Mr Darwin’s Shooter (1998) was awarded the New South Wales, Victorian, and South Australian Premiers’ Literary Awards and The Ballad of Desmond Kale won the Miles Franklin Award in 2006. His tenth novel, A Sea-Chase is reviewed in the November 2017 issue of ABR. He lives in south-eastern New South Wales, with intervals spent in New Zealand where A Sea-Chase is partly set.