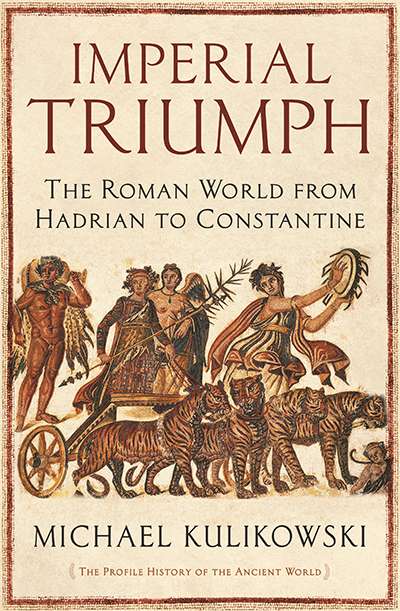 Imperial Triumph: The Roman world from Hadrian to Constantine

Mary Beard’s new history of Rome, reviewed here in March 2016, ended at the point where Edward Gibbon began his great Decline and Fall of the Roman Empire, in what he called the happy age of the Antonines. That is also where Michael Kulikowski takes up the story in this book, the first of two intended volumes, although, as he admits, he will not follow Gibbon all the way to the Turkish conquest of Constantinople, the second Rome, in 1453.

Kulikowski demonstrates impressive mastery of a vast and complex field, made more complicated by the chronic tendency of leading Romans to change their names for various political reasons, and the surprising lack of reliable historical texts from this period. Names, outlines of biography, and some events may be recorded in inscriptions, but numismatics is a particularly precious resource: thus coins recording a claim to imperial status are confirmations, and sometimes the only evidence, of attempts at usurpation.

Even the happy second century, as Kulikowski shows, was far from perfectly serene. The Empire had by now reached its greatest extent, but its many borders required permanent vigilance. No state had ever had a more efficient system of command and communication or such a highly organised military to maintain peace and order: and not only in the Antonine period, but for centuries afterwards, Rome did generally guarantee the security of its subject populations.

Imperial Triumph: The Roman world from Hadrian to Constantine