It is a testament to Ralph J. Gleason’s standing in the jazz community, at the time these interviews were made, that a composer of the stature of Duke Ellington would consider him a conversational equal. Says Ellington: ‘I feel like I’m on the same level with you because you have proven that you are a great listener.’ While far from a household name these days, Gleason’s contributions to music – both in jazz and popular form – were many. In 1939 he was founder and editor of Jazz Information, one of the earliest journals devoted to jazz. Several decades on, he co-founded, with Jan Wenner, Rolling Stone magazine. He produced the long-running television series Jazz Casual (1960–68); was co-founder of the Monterey Jazz Festival, still running today; and his many liner notes, for albums such as Miles Davis’s Bitches Brew (1970), are considered models of their kind.

Conversations in Jazz comprises the transcripts of fourteen interviews with jazz musicians, recorded by Gleason between 1959 and 1961. All, aside from the one with Ellington – which was taped for Jazz Casual – were carried out in the informal setting of Gleason’s living room in Berkeley, California. While he later plundered them for various radio shows and liner notes, the tapes languished in his house after his death in 1975, aged fifty-eight, until the early 1990s, when his family rediscovered them. Conversations in Jazz, edited by his son Toby, marks the first publication of the complete interviews. Given the combined standing of Gleason’s roster – which includes Ellington, John Coltrane, Sonny Rollins, Bill Evans, Dizzy Gillespie, Quincy Jones, Horace Silver, and all four members of the Modern Jazz Quartet – their belated appearance, over a half a century on, is to be welcomed.

The casual nature of these exchanges gives credence to the conversations referred to in the book’s title. Gleason’s opening question, in most cases, tends to be informed by his intimate familiarity with the artist’s work, rather than reflecting any set game-plan. For Bill Evans: ‘Have you ever explored the reasons why you’re in jazz?’ For singer Jon Hendricks: ‘You can’t read or write music?’ The path each interview takes routinely flows from these opening gambits, more improvisation than notation. Despite this, a number of common themes emerge: the importance of big bands as a training ground for young players; the growth of European audiences for American jazz, partly the result of the US State Department’s sponsored tours of the 1950s; jazz as a performative, rather than a recorded, medium; and the inevitable struggle to balance musical innovation with financial security.

Several of these interviews took place at a critical point in the artist’s career. In May 1961, Coltrane, fresh from the success of My Favorite Things, was newly signed to Impulse Records, famous for their bright orange covers emblazoned with the slogan ‘The New Wave of Jazz’. Though few could have predicted the radical directions his music would take over the next six years before his premature death in 1967, he foreshadows something of these in conversation with Gleason: including his ‘need to learn more about production of music and expression’; his ‘need for another horn’; and his wanting – despite lacking experience – ‘to do a real good big band thing’. Before the year was out, Coltrane would release his augmented ensemble recording Africa/Brass, and add Eric Dolphy’s alto-voice to his Quartet for the incendiary performances recorded at New York’s Village Vanguard. Upon reflection, it seems apposite that his final studio recording, released posthumously, was entitled Expression. 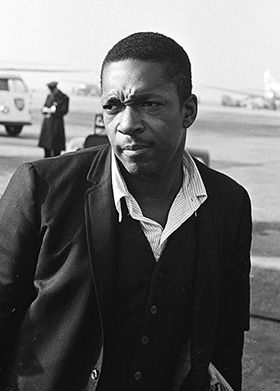 John Coltrane (photograph by Hugo van Gelderen, Wikimedia Commons)Sonny Rollins, on the other hand, after issuing a torrent of classic recordings in the years leading up to this 1959 interview, was about to embark upon the first of his sabbaticals, during which he famously abandoned performing and recording, and instead practised alone, over a two-year period, on New York’s Williamsburg Bridge. Rollins speaks of wanting his music to reach people, but ‘only if I can satisfy my own level’. Bill Evans, similarly, speaks of being ‘so dissatisfied with what I’ve been doing’. Less than a year before, he had played on Miles Davis’s Kind of Blue (1959) – arguably the greatest album in jazz history – and had recently formed his trio with Scott LaFaro and Paul Motian. The several albums they recorded, before LaFaro’s untimely death in 1961, would forever change the fundamental language of jazz piano.

More than fifty years on, Gleason’s interviews can best be viewed as historical documents, and as such they form a worthwhile addition to the jazz literature of the period. Of course, with ease of hindsight, one might query the presence of a minor artist like Les McCann; and likewise muse upon the absence of figures like Ornette Coleman or Charles Mingus. Presumably, Gleason’s base on the west coast, far from the jazz centre of New York, restricted his choices to musicians residing in or touring his neighborhood.

Ted Gioia notes in his introduction that these interviews ‘date back to a decisive juncture in jazz history’. The year 1959 saw the release of Miles Davis’s Kind of Blue, Dave Brubeck’s Time Out, Ornette Coleman’s The Shape of Jazz to Come, and Coltrane’s Giant Steps. Ironically, this high point also signalled the end of an era when jazz held popular sway across America. With its dominance destined to be eclipsed by rock and roll in the decade ahead, jazz innovators – including a number featured in this book – resolutely went about their business, taking the music to new levels of artistry. 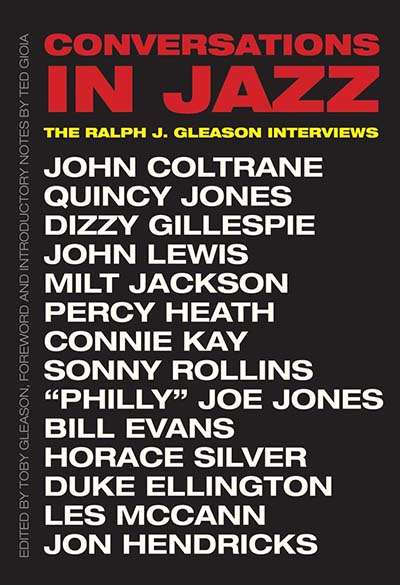