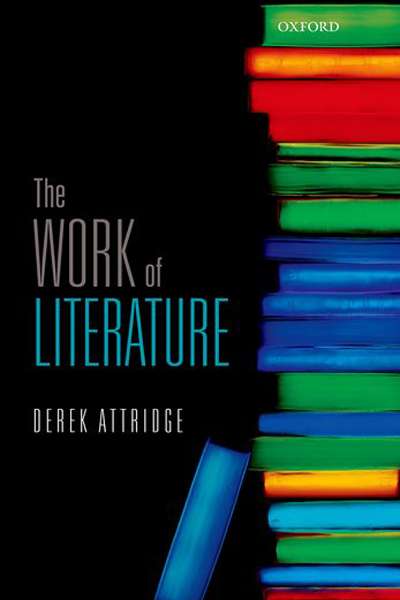 The Work of Literature

Derek Attridge is one of the most formidable theorists working today in the field of literary studies. His central strategy is to identify potential for recognition in the reading process of singularity and alterity, with the qualities of a particular work manifesting themselves most powerfully when they reveal 'unexpected possibilities of thought and feeling'.

Attridge is therefore relatively uninterested in literary history, which he sees as being concerned merely to describe 'general trends' without troubling to engage properly with individual works. This book, which includes some new material as well as a reprinting 'in revised form' of earlier essays, will be of particular interest to Australian audiences since Attridge, now based at the University of York in England, was born in South Africa and is a long-time friend and professional associate of J.M. Coetzee. Indeed, Coetzee looms large in this collection, being cited as early as the first sentence of the Introduction, with Attridge later describing how Adelaide's Nobel Laureate presents in his 'interviews and non-fiction writings ... one of the most compelling accounts of what it is to write literary works that I know'.

The first and most lengthy chapter, weighing in at ninety-four pages, involves a 'cross-examination' whereby the author interrogates himself about his own critical practices, mustering 'counter-arguments as strongly as I can, while providing space for responses that I hope are convincing'. This is an ingenious strategy, one that again bears some resemblances to Coetzee's self-scrutinising fiction. Attridge does of course risk acting here as his own judge and jury, and there is occasionally a sense of him setting up a straw man merely so that he can expound more fully his own ideas, but in general his academic outlook is remarkably wide-ranging, embracing music and the visual arts as well as literature. One later chapter is centred on 'Hospitality', and Attridge himself is a genuinely hospitable critic in his willingness to countenance ideas from many different positions and to engage with them through a process of intellectual dialogue.

The Work of Literature