I hope no one from Australia's various intelligence agencies is reading this, or they may be affronted. But for me, Our Man in Havana, Graham Greene's purported black comedy about an ingenious vacuum cleaner salesman deceiving Britain's MI6, has a marvellous ring of verisimilitude.

Indeed Greene, who worked for the spy agency for a while, got the idea from agents in wartime Portugal sending back to Germany completely fictitious reports which earned them expenses and bonuses to complement their salaries. Not only did his novel presciently anticipate the Cuban Missile Crisis four years later, but also other spectacular intelligence failures such as the missing weapons of mass destruction behind the second Iraq war.

Fascinated by film – Greene was The Spectator's film critic in the 1930s – he wrote a script set in Estonia in 1938, but later realised that Havana would be a much better setting. After his first visit, in 1954, he wrote that it was a fascinating city, 'quite the most vicious I have ever been in'.

Greene was liaising with director Carol Reed, with whom he had worked on The Fallen Idol and The Third Man, well before the novel was published on 6 October, 1958, and by 13 October he and Reed were in Havana preparing for filming.

Sadler's Wells commissioned the brilliant young Australian composer Malcolm Williamson to write the opera of Our Man in Havana, with a libretto by Sidney Gilliat, who had worked on the film script, and the premiere was in 1963. As Williamson wrote in Opera magazine just before that, in August 1963, 'it is not a light-comic opera but a black-tragic melodrama with the strong moral overtones that one might expect from Graham Greene'. He regretted that adding music forced the 'pregnant reticence' of Greene to disappear.

Yet it is a really fine work: tuneful, accessible, inexorably moving from lighter and dashing to sinister and tragic. As The Musical Times opined in 1963, it employs Williamson's gift for integrating popular into serious music. He uses a series of catchy Cuban dance tunes, which the paper said 'abound in compositional refinement, each of them different, and none authentically Cuban in rhythmic structure'. 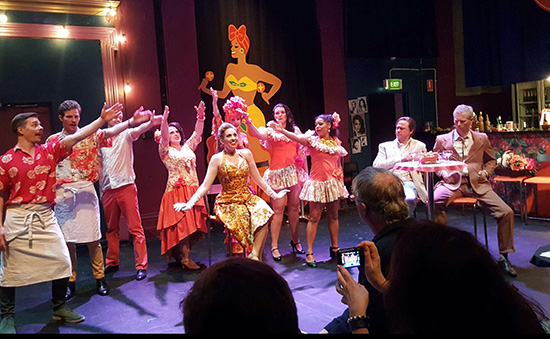 The cast of Our Man in Havana (Lyric Opera of Melbourne)

The opera was really well received, but fell into disrepair along with Williamson's career, as alcoholism, eccentricity, and open homosexuality took their toll on a composer who, as Master of the Queen's Music, was expected to be a thoroughly establishment figure.

Amazingly, this is apparently the opera's first production in Australia, taking fifty-three years to find a stage. It is a big project for Lyric Opera to tackle, requiring fourteen singers and an orchestra of at least twenty, but it is a triumph for the enterprising little company which has also brought Melbourne such gems as Offenbach's The Red Apple, Poulenc's La Voix Humaine, Puccini's Gianni Schicchi, Copland's The Tender Land and Marshall-Hall's Stella.

Suzanne Chaundy's ingenious direction makes the opera a cabaret, with the orchestra in bright Cuban clothes, conducted by the excellent Pat Miller in red bandleader's jacket, off to the left, and a working bar (open to the audience between acts) to the right. The vacuum cleaner sales office is centre stage, while the audience is on the same level.

The singers are often barely a metre from the audience, making the performance almost confrontingly intimate. Though it must add to the pressure on the singers, the strong cast copes with aplomb.

The two main roles – accidental spy Jim Bramble and his friend Dr Hasselbacher – are vocal marathons, but tenor Martin Buckingham and bass Matt Thomas are strong and convincing, both vocally and in their acting. Buckingham stepped into the role only three weeks before the opera opened, making his bravura but nuanced performance all the more creditable.

Kate Amos is a vivaciously kittenish Milly Bramble, the spoilt daughter whose extravagances lead Bramble to accept the MI6 money, and sings her big aria thanking St Seraphina most engagingly. 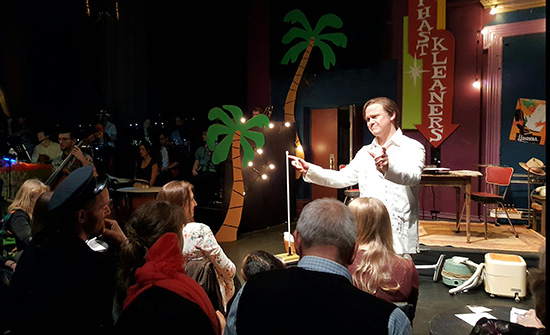 Veteran Michael Leighton Jones is marvellously deft as the recruiter Hawthorne – the main comic role – and has superb clarity. As Captain Segura, the secret police villain, Stephen Marsh sings well, but could benefit from more menace. In the 1959 film, the new Castro government was unhappy with the softening of this role, and also the nightclub scenes. According to English academic Peter Hulme, the new regime 'wanted the strippers to take off fewer clothes than Reed and Greene wanted them to take off, which was already considerably fewer than they would have taken off before the Revolution, which was all of them'.

Elizabeth Stannard as Beatrice and Raphael Wong as Carter contribute strongly, as do the chorus/dancers. Miller has a good command of the Buena Vista Antisocial Club, who play the demanding score with great elan if not perfect accuracy. Lucy Wilkins's entertaining costumes and sets and Lucy Birkenshaw's lighting created the atmosphere effectively. Really, it is a performance with no weak links.

Our Man in Havana, directed by Suzanne Chaundy, is presented by the Lyric Opera of Melbourne. It continues until 24 September at the Athenaeum Theatre Two in Melbourne. Performance attended: 20 September.