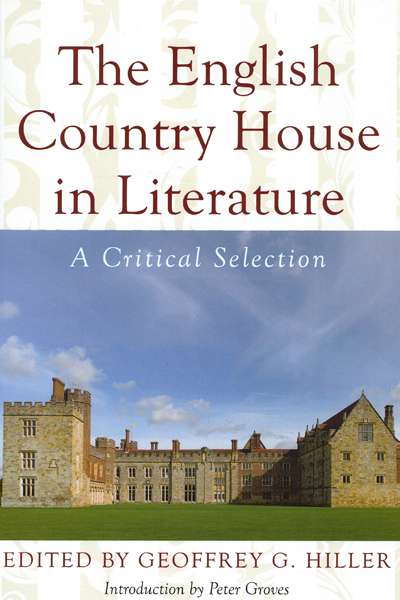 The English Country House in Literature: A Critical Selection

Outwardly safe, aristocratic, and uncontroversial, the English country house seems suitably benign coffee-table material to leaf through on a drowsy Sunday afternoon. However, while the story of the English country house is certainly steeped in nostalgia and privilege, it is also a narrative of exclusion, exploitation, and decline. Geoffrey G. Hiller engages with each of these manifestations in his latest book The English Country House in Literature, an anthology of extracts on the subject of the English country house spanning four hundred years. Hiller's selection, framed by literary renderings of country houses by Sir Philip Sidney and Sarah Waters, inspire the modern reader to journey behind the mythology that many take to be the truth of these institutions.

After the Dissolution of the Monasteries between 1536 and 1541, grand buildings and gardens were no longer the sole domain of religious communities. Not only were monastic lands appropriated by the crown and sold to court favourites, but syndicates of London merchants entered into land speculation. In some cases, newly wealthy men acquired vast amounts of land, sometimes procured chiefly as a means of generating income. Consequently, rack-renting and enclosure became a source of distress for many tenant farmers.

The country houses that grew up in the wake of the Dissolution often embodied architectural elements that reflected the growing absolutism of their owners' claims upon the world. In light of this emergent power, the introduction of Hiller's anthology contextualises why the notion of the good man, the stable, immutable estate, and the modest architectural form became coveted ideals during the Renaissance.

Sarah Dempster is an Honorary Research Fellow at the University of Western Australia. She completed her PhD in 2013 on the subject of literary landscapes in seventeenth-century literature and is now in the process of turning her thesis in to a book. Sarah also writes regularly for the Murdoch press.

The English Country House in Literature: A Critical Selection

Sarah Dempster is an Honorary Research Fellow at the University of Western Australia. She completed her PhD in 2013 on the subject of literary landscapes in seventeenth-century literature and is now in the process of turning her thesis in to a book. Sarah also writes regularly for the Murdoch press.