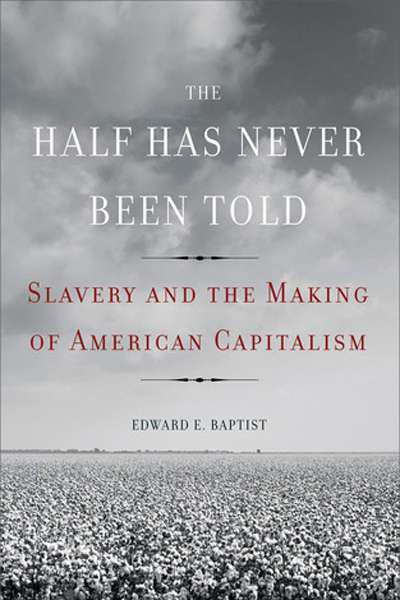 The Half Has Never Been Told: Slavery and the making of American capitalism

There is something pleasurable about a good American history book. I recall reading David Hackett Fischer's Paul Revere's Ride (1994) on a train journey from Boston to Washington. I read it not because I was teaching about Paul Revere, but because it was a fine work, true to a tradition in which, as Fischer put it, books 'are a sequence of stories, with highly articulated actors'. These stories are grounded in archival research, which makes them credible. Although they make a scholarly argument, they are written to be accessible to a wide audience. Writing in impenetrable jargon and deferring to French theorists, so fashionable in literary criticism, never took hold in American history departments.

Edward E. Baptist writes in the American tradition, albeit without the sense of humour displayed by many great historians. He prefers to write with a touch of anger, eager to expose the role the slaves who toiled on cotton plantations played in driving America's economic growth. Nevertheless, his book is based on meticulous primary research, and he tells his American story through a series of smaller ones, each of which takes the reader back to antebellum America. These stories are based on 'thousands of personal narratives', memoirs, and 2,300 interviews conducted by the Works Progress Administration in the 1930s. They come together in a way that makes it hard to disagree that American capitalism, and indeed the American nation, is tainted by its association with slavery.

We all instinctively know that slavery is wrong, but in keeping with the book's economic focus, Baptist emphasises its brutality as a labour system, where output was maximised using intimidation and punishment, or, as he prefers, 'torture'. To drive this point home he refers to the slave system by the shorthand term 'the whipping machine'. It is richly evocative language, the more so because the term derives from one of Baptist's stories.

The Half Has Never Been Told: Slavery and the making of American capitalism