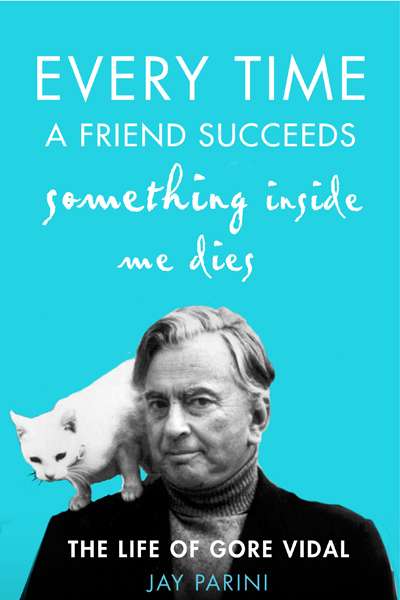 Every Time a Friend Succeeds Something Inside Me Dies: The Life of Gore Vidal

You could call central casting for a debonair man of letters, but they’d never send someone as perfect for the role as Gore Vidal. By the time the stylish, sharp-witted – and yes, Hollywood-handsome – Vidal turned twenty-one, he had already served as first mate on a US supply ship in the Aleutian Islands during World War II and published a novel about the experience. With Williwaw (1946), Vidal marshalled in a new generation of writer–veterans that would come to include Norman Mailer, James Jones, and Kurt Vonnegut. Their work dominated the American literary landscape for decades. Among them, Vidal – cultural critic, novelist, essayist, playwright, screenwriter, television personality, actor, occasional politician, and public intellectual – proved to be the most diverse and prescient. In his engaging new biography of Vidal, novelist and biographer Jay Parini separates the writer from the cult of personality.

Vidal arrived ready not for one role but for many. When he died, aged eighty-six in 2012, he left behind more than fifty books. His dozen screenplays include Ben-Hur (uncredited), Suddenly, Last Summer, and Is Paris Burning? Vidal’s plays Visit to a Small Planet and The Best Man were Broadway hits. In historical novels such as Julian, Burr, and Lincoln, he widened the possibilities of contemporary biographical fiction in ways that foreshadowed Flaubert’s Parrot and The Paris Wife. His other fiction (‘inventions’, as opposed to ‘reflections’), such as Myra Breckinridge and Kalki, competes with the postmodernist experimentations of Barth and Barthelme and the nouveau roman products of Robbe-Grillet.

Every Time a Friend Succeeds Something Inside Me Dies: The Life of Gore Vidal