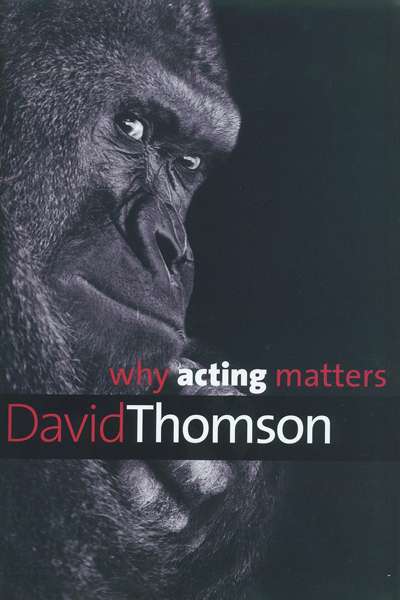 Why Acting Matters has on its cover the face of an ape; well, actually it’s Andy Serkis playing Caesar, ‘the top ape’ in Dawn of the Planet of the Apes (2014). The point of this rather unexpected image from a movie not discussed in the book is, the blurb tells us, that ‘acting is baked into our primate DNA’. These two books, however, by elder statesmen in their respective fields, are concerned not with our primate ancestors, but with the particular form of acting to be found in theatre and cinema. Both have published important reference books: Stanley Wells has the Oxford Dictionary of Shakespeare (1998) among his many publications, while David Thomson’s other career as a ‘celebrity podiatrist’ (as he jokingly refers to himself) has not prevented him publishing far and wide, including The New Biographical Dictionary of Film (1975) which is now in its sixth edition.

Wells’s Great Shakespeare Actors are thirty-nine in number, only ten of whom are women, a disparity only partly explained by the fewer female roles created by Shakespeare, who assumed that boys, not women, would be playing them. Inevitably there will be arguments about who is ‘in’ and who is ‘out’, while it almost goes without saying that the list is Anglocentric, the few Americans to be included having played at some stage of their careers in London.

An introductory essay earnestly considers what makes a great actor. Wells points to Michael Billington’s identification of ‘the androgynous, bisexual quality that invariably underpins great acting’, but does not pursue it; instead he provides what is almost like a shopping list, which includes make-up, props, memory, and vocal prowess. When we get to ‘facial expressions’, this identikit of the great actor risks absurdity. Of course actors require skills, but great acting usually defies such itemised explanation: we simply know that we have witnessed it; just as some actors and performers are blessed with that mysterious quality we call presence, which certainly gives them a head start.