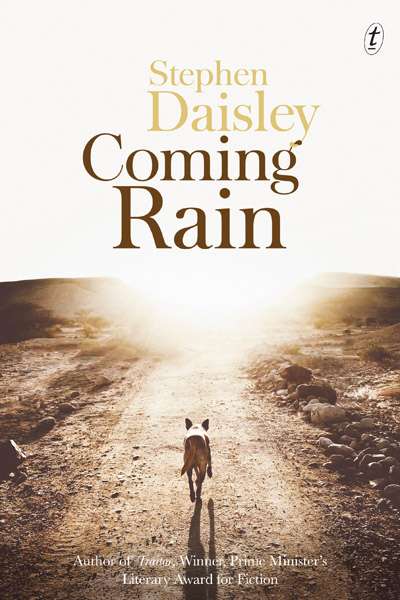 For this reviewer, it’s been a long five years since the publication of Stephen Daisley’s Traitor (2010). The rightly acclaimed and award-winning début novel wrote of the terrors of war, and the life on the land of one irreparably damaged New Zealand soldier, David. As an exploration of the damage done to an ordinary and unappreciated man, the prose was often hauntingly poetic, often carrying the weight of what can’t be said – the sadness and the tragedy that is too immense to take in. In this respect Traitor was a truly original vision, and yet many of its thematic concerns, its deft use of the telling detail, its beautiful descriptions of landscape and ear for dialogue are also present in Coming Rain.

The novel takes place in 1956, largely in the ‘marginal wheat and sheep lands’ of the South-West of Western Australia. Lew, a young man in his early twenties, and Painter, his older companion, work as a team charcoal burning and shearing, moving from job to job in Lew’s old truck. Lew is eager for experience, and the novel opens with his seduction by an older woman, using him as a stand-in for her husband killed in the war. Painter however is well-beyond taking any interest in matters-of-the-heart, having burnt his bridges during his drinking years. Daisley describes him thus: ‘wearing a blue Jackie Howe singlet. Unshaved face. A bald head worn brown in the sun, covered in scars and odd bumps. Both ears were lumped, cauliflowered, and his left ear was much smaller. The nose broken so many times there was no bridge left. He had big wrinkled hands covered in tattoos of birds and stars.’ Painter is a man who has learned, often from bitter experience, to ‘lie to tell the truth and distrust the truth as a lie’. Indeed, it’s an authentic feature of the masculine relationships in this book that a man like Painter is most impressive when he’s silent, immersed in his labours, working alongside his younger companion. When the pair arrive at the eastern-wheatbelt station of John Drysdale, to shear a thousand-odd head of sheep, this importance of work as the emotional core at the heart of their relationship becomes foregrounded, and allows Daisley free rein to employ some of his most vivid writing. Here the minutiae of farm life are rendered with respect and sympathy, emphasising the ingenuity by which farmers have adapted an alien technology to the demands of the new land. Lew and Painter work with a resourcefulness and unspoken pride that expresses the truth that it’s the respect for the job, and the self-respect associated with doing the job right, in which the true dignity of work is to be found.