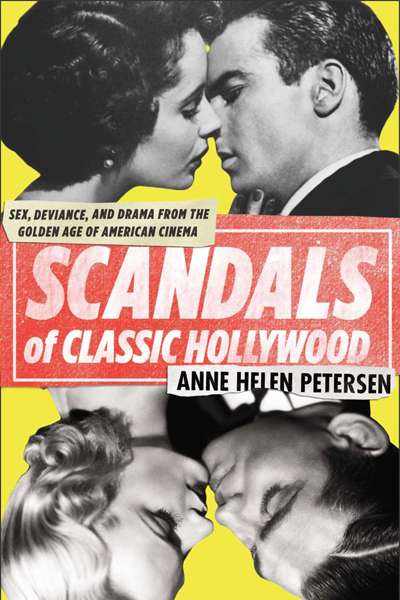 Bette Davis once described Hollywood actors as American royalty, a cohort that answered the core human desire to look up to something. Those Hollywood actors who became stars (so named because of the stars in Paramount Pictures’ logo), thus served a purpose not only by acting, but also by representing societal and cultural ideals; not an easy demand, as such ideals are often conflicting. Anne Helen Petersen’s first book, through a series of star profiles, suggests that there is something more sinister than grand about this worship. In the early years of Hollywood, ‘stars weren’t born, they were made’; this may sound glamorous, but Petersen explores the darker side of this phenomenon.

While Scandals of Classic Hollywood feels like a book that might inspire or quash salacious rumours – the cover design features two couples in heated embrace and a selection of sensationalised tabloid-worthy snippets – the real scandal is how studios, journalists, and the public cared more about the image than the person. On the surface, Petersen’s book seems in the vein of Kenneth Anger’s Hollywood Babylon (1959), an infamous tomb of gossip that has largely been disproved. But Petersen, an academic and historian, weaves contemporaneous accounts from newspaper columnists, cultural commentators, and biographical materials into a strong critique of the studio system. She treads the ever-thinning line between pop-cultural journalism (published online by the likes of BuzzFeed, where Petersen is now a staff writer) and considered academic analysis, stemming from her doctoral thesis on the celebrity gossip industry.