Helen Garner, speaking about Nora, the main character in her iconic novel Monkey Grip (1977), once said that, although she had seen and experienced many of the things that had happened to Nora, she was not Nora. In a similar vein, Bruce Steele argues in this short biography of Walter Lindesay Richardson that although there are many similarities between the lives of Richardson and Richard Mahony, the main character in Henry Handel Richardson’s great trilogy (1917–29), Walter Lindesay Richardson is not Richard Mahony. One was a real person, the other a fictional character, and Steele is keen to point out the differences between the two men’s lives.

The biography is a postscript to the massive Henry Handel Richardson project undertaken over fifteen years by Steele and his colleague Clive Probyn at Monash University. Their collaboration resulted in scholarly editions of Richardson’s Maurice Guest (1998), The Getting of Wisdom (2001), and The Young Cosima (2004), a three-volume critical edition of her classic The Fortunes of Richard Mahony (2007), and a three-volume edition of her letters (2001).

Marriage Lines and some of the above titles from the Richardson project were, like this biography, published by Australian Scholarly Publishing. Over the past decade, ASP has been one of the main, if not the main, publisher of titles that could be broadly classed under the rubric of ‘Australian Studies’. It has been willing to publish both revamped theses and books on specialised Australian subjects which other mainstream publishers are unwilling to touch due to the perceived (and likely) small market. Bruce Steele’s biography of Richardson is one of these small print-run titles.

The production here is modest and copy-editing apparently minimal. Baron von Mueller’s name is spelt incorrectly at the beginning, correctly in the middle, and then incorrectly again at the end of the book. The book itself should have been given a wider gutter margin, as the tight binding makes the text on the inner page difficult to read. But these are probably things that one has to accept in small print runs published relatively cheaply, and ASP is to be commended for including this biography in its publishing program.

One of the things that becomes clear from reading Steele’s book is that Richardson was an interesting nineteenth-century figure who had a life and career outside of being the father of Ethel Florence Richardson and a model for Richard Mahony. His obituary in the Australian Medical Journal (quoted in full in the book) begins:

Dr Richardson … seemed likely, at one time, to be a foremost man in the profession of this colony. He was unusually gifted, and had many personal advantages in his favour. His literary qualifications were greatly above average, and he was a fluent and impressive speaker.

After arriving in Victoria in 1852 in his late twenties, Richardson was a storekeeper on the goldfields before becoming a doctor in Ballarat for a decade. He was a pioneer in obstetric practice in Victoria and published numerous articles in leading medical journals of the time as well as in the wider press. He was an amateur botanist, a founding vice-president of the Ballarat Horticultural Society, and a friend of the great colonial man in the field, Baron von Mueller.

Richardson and his wife returned to England for two years in the late 1860s. Upon his return to Melbourne, Richardson became both a father and a man of leisure, having made enough money from his mining investments to retire. He enjoyed the life of a gentleman in a large house he had built in St Kilda. While a man of leisure, he became, like others in colonial Melbourne, an active spiritualist. Richardson was the inaugural president of the Melbourne Branch of the Victorian Association of Progressive Spiritualists and, as appendices, Steele includes three of Richardson’s addresses on spiritualism.

Richardson took his family to England for another extended stay in the early 1870s. While touring Europe, he learnt that his investments were deteriorating rapidly due to a downturn in the mining industry. He decided to return to Melbourne as quickly as possible to try and sort out his finances, leaving his wife and two young daughters to make their own way home.

But Richardson had put too many, if not all, of his eggs into the one basket and soon realised upon his return to Melbourne that his life as a gentleman was over. He sold his house in St Kilda and then unwisely built and over-capitalised on a smaller one in Hawthorn (now the site of the Glenferrie Hotel). His circumstances forced him to return to earning an income as a doctor, firstly on a seemingly casual basis in Melbourne, then at Chiltern in northern Victoria, followed by another attempt at Queenscliff.

Neither of these practices worked out, and while at Chiltern Richardson evinced the first signs of the debilitating illness that was to destroy him. In a letter to Mary he wrote, ‘I was posting a letter … and found myself unable to articulate.’ Such attacks and related queer behaviour increased at Queenscliff and the family was forced to move back to the city. Soon afterward, Richardson was admitted to the insane asylum at Yarra Bend.

Some critics have suggested that Richardson’s insanity was the result of his having contracted syphilis when young. At the time there was a causal link between syphilis and insanity, but there was no annotation to that effect on his asylum admittance card, whereas there is on the records for other residents. The definite link between the two diseases was not formally discovered until 1913. Since then some critics have adduced this link to explain Richardson’s demise. Steele argues that there is not a shred of evidence that Richardson ever had syphilis and that his personal way of life suggests otherwise. Still, it is possible that he picked up a secondary infection while practising obstetrics on the Ballarat goldfields. Steele believes that Dorothy Green, author of the major study on Henry Handel Richardson, Ulysses Bound (1973), got it right when she wrote in 1985 that no ‘proof of the cause of dementia was possible in 1879 …’ and ‘none is possible now, with a handful of bones 106 years old’.

Once her husband was too ill to work, let alone run a medical practice, Mary Richardson was forced to train as a postmistress and took up a position running the Koroit Post Office in western Victoria. She collected her husband from the lunatic asylum and he spent his last days in her care at Koroit, dying there on 1 August 1879, thirty years to the day since he had graduated in medicine from the University of Edinburgh.

His wife, somewhat surprisingly given Richardson’s financial problems, was left with more than £2000. She continued to run the post office but the money enabled the two daughters to attend Presbyterian Ladies’ College in East Melbourne. One, very musically talented, went to Europe to further her piano studies before turning to writing and marrying a very supportive husband, who was able to provide her with the necessary £500 a year and a room of her own so that she could concentrate on her writing.

Walter Lindesay Richardson has, until now, been known solely as the father of Ethel Florence Richardson and as a model for her most famous character. Bruce Steele has in this biography succeeded in his aim of giving Richardson a life of his own. It should be read in conjunction with the published collection of his letters to his wife. She, too, deserves a biography. 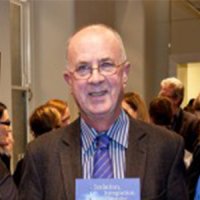 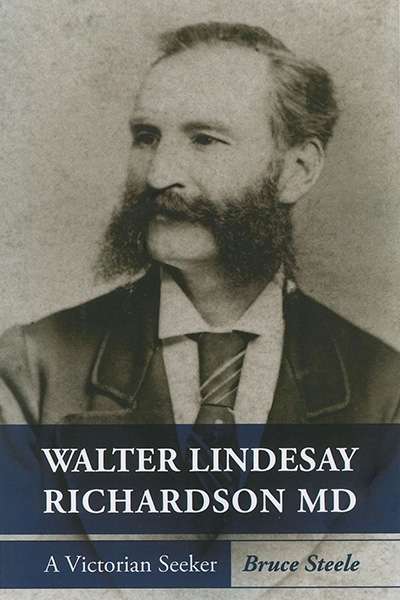