His Stupid Boyhood: A Memoir by Peter Goldsworthy

Italo Calvino once observed that the ideal condition for a writer is ‘close to anonymity’, adding that ‘the more the author’s figure invades the field, the more the world he portrays empties’. These comments about anonymity were made during an interview on Swiss television, no less. Calvino must have felt his imaginary worlds slipping away as he spoke.

What, then, is the place of the writer’s memoir? That is, what relationship do these works of non-fiction bear to the creative output that, in a sense, makes an autobiography necessary and interesting? The answer in Peter Goldsworthy’s warm and entertaining memoir about his childhood and teenaged years is essentially one about curiosity as a creative method. In the relatively unknowing state of youth, the ‘stupid’ world that we revisit later almost as strangers to our younger selves, we find the basis of how we come to write, if never entirely why.

Goldsworthy’s youth is overwhelmingly a fortunate one. His father is a school principal who every few years is shipped to new and at times remote schools, and whose career eventually takes the family to Darwin. There, Peter Goldsworthy becomes one of the few regulars at the library and, seemingly, the only bona fide serious young man in town. However unsuited this status might be to life in a frontier community, his mother is unfailingly supportive; she even congratulates the young poet on a cravat that his truest friends have already planned to steal and destroy.

Goldsworthy, here, is allowing us to see a version of himself that many would prefer to leave in a box somewhere, in a loft or in our parents’ garage. Of course, there’s comedy in such a self-portrait. But in this memoir the portrait also reveals an interesting middle ground that exists between an embarrassing earlier self and its function as the necessary precondition to something better.

We’re given a few early poems to read. They are rather closely related to the other experiments of youth, which we learn are mainly performed with the left hand. You don’t have to be a wanker to become a writer, but perhaps on balance it helps. The performance of an author-caricature – the cravat, as indeed the beret and the pipe, other props in the performance – may be just the thing to face out to the world while the authentic poet begins to develop. What I find interesting about Goldsworthy’s early role as author-in-waiting is not the fact of the cravat (after all, he didn’t replace the one his friends stole), but rather the inquisitive collector’s mindset that goes into its acquisition. For that is the enduring quality that, to some extent, the cravat helps to define.

‘...this memoir reveals an interesting middle ground that exists between an embarrassing earlier self and its function as the necessary precondition to something better.’

It is Goldsworthy’s faith in material objects, in life as a science of experiments and replications, that supplies the young man with his author prototype: an overdressed, politically active consumptive who, regardless of his appearance, is immensely attractive to women. Put those elements together and you’ll surely get an author, just as certain combinations in a chemistry set will produce an explosion.

The early parts of His Stupid Boyhood recount Goldsworthy’s attempts at bomb-making and petty theft as the first expressions of this collector’s mindset, and of a mind drawn equally to the physical and the poetic, including the poet as a certain kind of cultural performer. Gathering equipment and materials for experiments connects to other collections, not least a visual gallery of the women he meets. A fondness for objects finds its way into his early poems and, perhaps most profoundly, into a collector’s attitude to words.

Strangely, Goldsworthy very nearly achieves the author prototype he’s established in his mind. On one occasion, he actually bumps into a swottish beauty impressed by his first poems. At readings, it seems that most are prepared to take Goldsworthy’s authorial ambitions as fair warning that he might actually one day be an author. But it’s not until he’s faced with the kind of broken body that he’d once thought constituted the author’s physical self that he abandons the prototype. While at medical school, both his lungs collapse. A grave illness alters forever his attitude to both language and the body, or, perhaps more accurately, unites his attitude to these things with what has been developing underneath, an enduring and innate trust in lived experience.

No doubt it’s fitting, therefore, that this book adopts the same inductive approach, and only towards the end reaches for general ideas about authorship. As Calvino put it, ‘a place has to become an inner landscape for the imagination to start to inhabit that place, to turn it into theatre’. That is, it has to be lived again from the inside.

In returning to the foreign and at times ‘stupid’ places of his childhood, Goldsworthy for the main avoids the general in preference for the particular. The result is a book that leaves much for the reader to decide, and to some extent veils its ardour in a tone that the teenaged Goldsworthy might have found too light. I suspect most readers will have no trouble with that. After all, a great deal about Goldsworthy is implied at the book’s very beginning, in an extraordinary list of publications that precedes this memoir. It will be to this ultimate collection in the writer’s life that many will now return. 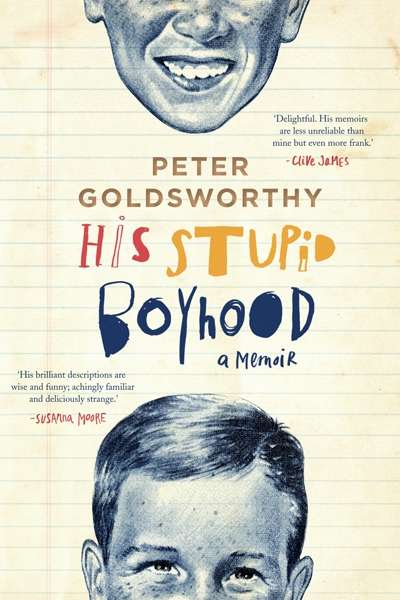 His Stupid Boyhood: A Memoir