Others abide our question. Thou art free.
We ask and ask: Thou smilest and art still,
Out-topping knowledge.
(Matthew Arnold, ‘Shakespeare’)

When Arnold wrote his famous sonnet, he could have been anticipating John Bell’s book, which repeatedly asks provocative questions about the man and the work that have been his life’s inspiration – and arrives at much the same conclusion as Arnold. We don’t go to Shakespeare for mere knowledge, but for insight, challenge, and enrichment, and perhaps to help us know ourselves and others better. Further, as Bell says: ‘There is no worldwide conspiracy to keep Shakespeare alive. He survives because actors want to go on performing him and audiences want to listen.’ These sentences come from his second-last page, and the rest of the book helps us to understand why.

In his prefatory note, Bell announces that ‘It’s not a book for academics or theatre buffs.’ So, who is it for? He hopes that ‘it may encourage students and other interested readers to delve further into the complexities of Shakespeare in books weightier and worthier than this’. I think academics, theatre buffs, students, or that mythical beast ‘the general reader’ may all find things to interest them in this pot-pourri of responses to reading, thinking about, acting, directing, and viewing Shakespeare.

Academics and students may well find stimulating the reflections on particular plays, and Bell goes through virtually the entire canon. He opens up some plays in fascinating ways that may not necessarily find agreement but may at least cause a bit of rethinking. I was taken by the account of Lear, having always felt that a bit more tact from Cordelia might have saved everyone a lot of unpleasantness. As Bell says, the whole love-test thing is ‘rigged’ as Lear was always going to give the favoured Cordelia ‘a third more opulent’ share of the kingdom, and we might feel some sympathy for Goneril and Regan,who are entirely aware of this. Possibly anyone who has had suddenly to provide hospitality for the unexpected arrival of a hundred unruly knights and a cantankerous father would agree. Ultimately, though, what Bell responds to in the play is ‘the tearing apart of family, of community, of country, due to arrogance, moral blindness, emotional deadness and the abuse of authority’.

There are also astute comments on many of the other plays, including his diagnosis of Iago’s jealousy and Othello’s ‘great weakness’, which he claims is ‘not jealousy but pride’. He finds less interest in Henry VIII because, he feels, this was history too recent for safe and serious appraisal, but he captures the splendours and specificities of the Henry IV plays evocatively when he writes of them: ‘A whole nation is set before us like a vast Breughel landscape, so populous, so detailed.’ And he bears this contention out in a warm appreciation of the range of characters who people this incomparable pair of plays – from Falstaff to the fleeting reference to the late Robin Ostler, who ‘never joyed since the price of oats rose’.

As a rule, Bell is less persuasive on the comedies. All right, I’m prejudiced because I greatly disliked the Bell Shakespeare production of Twelfth Night in which the play seemed ransacked for, and was played with, vulgarities of every hue. Bell should have asked his producer to heed his (Bell’s) warning about this play, that ‘subtle shades can be obliterated by boisterous horseplay’. And Bell’s apologia for the gender nastiness of The Taming of the Shrew is fragile (did making Petruchio ‘a footloose Vietnam vet’ really help?). However, there are real insights, from the points of view both of actor and director, into the workings of A Midsummer Night’s Dream and The Merchant of Venice. In regard to the latter, Bell carefully examines the claims of anti-Semitism, balancing these against the play’s ‘eloquent rebuttal of Christian bigotry’. Writing of The Dream, he aptly recalls how Peter Brook’s production, set in ‘a stark white box’, showed that ‘real theatrical magic could be created by words and by actors rather than by scenic artists and lighting effects’.

However, there is a lot more going on in this book than just exploring the plays’ complexities of meaning, though there is plenty of that worth the attention of academics, actors, students, or anyone with an interest in the plays, whether on page or stage. Those on either side of the footlights who want to come to terms with, say, the Roman plays may benefit from thinking about their republican sentiments in the context of the intensely monarchical Britain. There is, too, ongoing fascination in how actors prepare themselves to tackle demanding roles such as Prospero, so that it is not just a matter of standing around and declaiming beautiful verse. For Prospero it is, rather, a matter of finding that this ‘humanist scholar has to learn about forgiveness, tolerance’ and so on, and that this is ‘a mighty struggle for him, he is so locked in the role of magus’ – and that all this is ‘written into the text’. 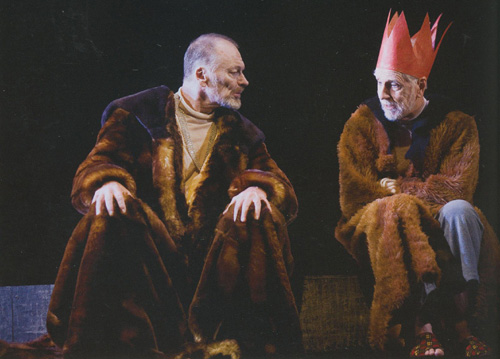 John Bell as Lear with Peter Carroll as the Fool, King Lear (2010)

Bell’s On Shakespeare is a very ambitious undertaking. Its concerns go well beyond the details of the plays, to include, for instance, some account of Bell’s own career – how he became besotted with Shakespeare, his experiences with Britain’s Royal Shakespeare Company, setting up his own company, how he went about directing and acting in this or that play. As well, he aims to give a sense of Shakespeare’s age. This involves imagining the first night of Hamlet with ‘Dick’ Burbage in the title role, evoking Shakespeare’s life in Stratford and in the Globe-centred London, his theatrical and social aspirations, and even giving a slightly touristy view of these hallowed sites. The mingling of the personal and the historical in Bell’s account is in general smoothly enough managed, and certainly, as he makes clear at the outset, he was never going to be committed to giving readers a purely scholarly account of the oeuvre.

There are a good many beguiling treats to be had from this miscellany. For example, there is something endearing about the way Bell simply quotes in full, from Troilus and Cressida, his favourite Shakespearean speech. For another, he writes about the rarely performed Timon of Athens with a verve that makes me feel I need to reread, for the first time in many decades, this ‘simple parable about a rich playboy who flings around his money’. He fossicks away at the Sonnets, not only to pursue the mildly vexed issue of their inspiration, but also to locate the drama Shakespeare enacted in this most rigid poetic form. Best of all, there are several ‘interviews’ with Shakespeare’s contemporaries that are done with real originality and a command of tone that vivifies these wittily imagined personages. The slightly fraught relationship with Ben Jonson is especially diverting, as it emerges here; the two old-codger publishers swigging mulled wine are an engaging comic invention.

The book ends with a brief chronicling of the Bell Shakespeare company and John Bell’s own aims as producer (other producers, such as Steven Berkoff, make guest appearances) and reflections on why Shakespeare is still Number One. This is not a matter of mere ‘relevance’, but ‘we keep coming back because there is so much that is worth grappling with’. I can’t agree with Bell at every turn, but there is much in his book that is worth grappling with.