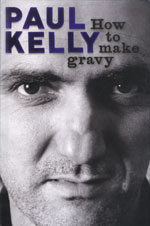 In his ‘mongrel memoir’, How to Make Gravy, singer–songwriter Paul Kelly describes the ‘pretendies’ that can ambush a musician on stage: ‘One minute you’re putting a song over to the crowd, totally inside what you’re doing, everything meshing, then suddenly you’re adrift, floating above yourself and wondering what on earth you’re doing there.’

Kelly attributes the term ‘pretendies’ to songwriter Spencer P. Jones. Whatever you call them, they are torture for an audience, but even worse for the one adrift on stage. At their most undermining, they are a crisis of faith not just in your own ability, but in the whole business of standing in front of people making pretty noises for a living. And they are terribly contagious. Kelly describes how they can move through a band, as ‘everyone keeps their head down, not daring to look each other in the eye as they try to right the listing ship’. In Kelly’s world, the talking interlude is particularly vulnerable. Avoiding them is ‘mainly a matter of wheel alignment – having the axles of sincerity and slyness in perfect counterbalance. Too much overblown feeling on one side or too much smirk on the other, and you’re swerving all over the road.’

How to Make Gravy is essentially a giant talking interlude, providing context to the emotional autobiography of the songs. In both genres, Kelly steers a deft course between sincerity and slyness. Kelly’s songs are dense story-poems, but they apply directly to the listener, creating the illusion of conversational slack. Despite its considerable length, How to Make Gravy operates with a similar concision. It comes across as a chatty, companionable book, but Kelly only ever tells us as much as he wants us to know.

Kelly once imagined himself ‘as a writer of seventeen-syllable haikus’, and there is a haiku-like quality to his prose, in its particularity and its concision. His heroin habit is dispatched in four taut pages, alongside the story of two relationships. This small chapter/song, ‘Me Or It’, begins in the first person – ‘Heroin was the one for me’ – before flowering into the poetry of the ritual: ‘the pretty, billowing bloom of blood in the glass tube preceded, by a slow second, the nauseous, freight-train flood of pleasure.’ As the drug takes hold, the prose moves into the second person, universalising the experience: ‘you and your wife, soon to be divorced, were like two people on opposite shores of a wide river.’ Then a segue back into first person, as a reality check: ‘I got lucky. I met a woman who said, “It’s me or it”.’ Finally, the prose contracts into a terser rhythm: ‘I thought about “it” every day for a long time. Less now.’ There is a rhythmic quality to this writing, and a command of modulation, that owes much to the songs.

The emotional heart of the book is the chapter ‘Qi’, which begins slyly: ‘I played Scrabble with my mother in her final days and, surprisingly, almost won.’ Then his mother made a late comeback, with the triumphant placement of ‘qi’ on a triple going both ways. The irony of this was not lost on Kelly: ‘Defeated by a 76-year-old woman’s life force, I packed up the letters and board ruefully. She gave me a small apologetic smile. A week later she was dead.’

In the pages that follow, Kelly steers us back towards the sincere. The large Kelly family gathered around her bedside, waiting for the last breath: ‘Then came the last pause, the one that never ended. I think of it now and imagine I heard a very soft click, like the sound of somebody walking out of a room and turning off the light.’ This is perhaps the book’s most beautiful line. But lest we slide off the road into unadulterated feeling, Kelly adds a corrective smirk. At the funeral, he remembers ‘being able to see from the front pew, while waiting for everyone to assemble before the mass, the tip of Mum’s nose just poking up above the rim of the coffin, as if to say, “What’s going on?” She never did like missing out on a family get-together.’

It is these changes of register that make this book so large, and prevent it from ever feeling too long. It unfolds less as continuous narrative than as catalogue: of letters, songs, prose-poems, journal entries, lists, and colour plates. The letters and diary entries contain a more diluted prose, but offer insights into the life of a musician: the endless touring, the self-scrutiny of the recording process (‘Relax,’ Kelly tells himself, ‘it’s just odd pop music from a little country – not the Sistine Chapel’).

More than anything, How to Make Gravy is a catalogue of enthusiasms, and Kelly’s enthusiasms are many: Rembrandt, the King James Bible, Shakespeare, sex, Proust, The Louvin Brothers, Raymond Carver, cricket. Kelly writes keenly about Frank Sinatra, savouring both the details of his art – ‘the long breath, the tone like a horn’ – and its message – ‘the gap between youth and old age, that big sea we cross, is the story of our life, and all our other stories – of love, work, power, family, health – fit within it’.

As in any memoir, this emerges as the story of this book. The major theme is Kelly’s work, of the translation of these enthusiasms into song. Its great generosity lies in how it invites the reader into this process. Raymond Carver is transformed into the haunting ‘Everything’s Turning to White’; Kelly’s passion for cricket inspires the comic ‘Shane Warne’. This alchemy is as mysterious for Kelly as it is for all of us – ‘if I knew how to write a song I’d write one every day’ – but if he cannot explain it, he can at least describe it. Some songs ‘slither out’; others ‘get nearly finished and then, like a yacht on a windless day, become becalmed’.

How to Make Gravy is a manual on how to look at things, how to pay attention. It is a hymn to receptivity as much as it is to creativity, a portrait of the artist in full creative health, consuming and producing in equal measure.

Anna Goldsworthy is an Australian classical pianist and writer. Her writing has appeared in publications such as Best Australian Essays 2007, 2008, and 2009, The Monthly, The Australian, Australian Book Review and The Australian Literary Review. Her musical memoir, Piano Lessons, was released in Australia by Black Inc. in October 2009, and won 'Newcomer of the Year' at the 2010 Australian Book Industry Awards. Anna is a Board Member of ABR.