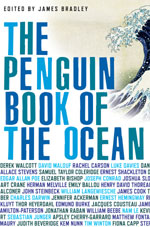 A remarkable anthology from James Bradley

Imagine a bookshop or library whose contents were shelved in a cross-generic way to include a section for Anthologies: this surely would be the largest division, encompassing all of the subsections of literature, science, music, philosophy ... The anthology (‘gathering of flowers’), with its impeccable classical pedigree, is the most comprehensive kind of book, catering in the contemporary reading economy to every conceivable market, from astral travelling, through gay fiction, ghost stories, long/short/tall stories, poetry of all persuasions, to travel in Turkey and Great Zoos of the World. There is a burgeoning publishers’ trade for the literary anthology – a ‘safe’ book, the serious reader’s stocking-filler, something with at least a few contributions calculated to entertain or edify.

James Bradley’s big salty Penguin is an exceptional gathering, by any criterion. Its range is broad – through early voyagers’ journals to scientific and historic studies of the ocean, to a wide range of fictional and poetic discourses (British, American, and Australian). It’s a serious book, which engages less with the shallows than with the depths: few consoling ‘full fathom five’ sea changes here, but much more in the vein of

cliffs of fall
Frightful, sheer, no-man-fathomed. Hold them cheap
May who ne’er hung there.

Neither Shakespeare nor Hopkins is represented, but who could complain about their absence from this particular diverse and eclectic company of voyagers, swimmers, and divers? James Bradley, poet and novelist (the author of Wrack [1997], based on the mythical wreck of the Mahogany ship), shows a new talent as textual explorer of the great deep. ‘Ocean’ occupies a more resonant lexical space than ‘sea’: beyond the littoral, including but beyond the wave-breaks which inform a beach culture such as Australia’s. One of the shortest contributions in this anthology, Fiona Capp’s That Oceanic Feeling, forms a subtle bridge between the realms of the known sea/beach and the encompassing unknown of Ocean.

Bradley’s book is radically different in scope from Robert Drewe’s estimable Penguin Book of the Beach (2006), which, for all its dark undertows, is concerned principally with the lives of shore dwellers as explored through fiction. The editor of the Penguin Book of the Ocean opts quite daringly for a selection that is heavily slanted towards non-fictional discourses. In the company of Hemingway, Melville, Steinbeck, and Conrad, we encounter Hakluyt’s The Last Voyage of Thomas Cavendish (1591–92), Burke’s On the Sublime and Beautiful (1756), Owen Chase’s Narrative … of the Whale-Ship Essex (1821), and excerpts from the journals of James Cook, Charles Darwin, and Ernest Shackleton. One of the book’s felicitous groupings places Moby-Dick (1851) between Hart Crane’s ‘At Melville’s Tomb’ (1926) and Chase’s riveting Whale-Ship Essex, a major source of Melville’s epic.

Rachel Carson’s celebrated ‘The Gray Beginnings’ (1951) meditates upon the origins of life with scientific detachment and lyrical wonderment; it seems the inevitable choice of an opening into a gathering of work which focuses as much upon the ocean as place (Jonathan Raban: ‘It is as substantial and particular, as crowded with topographical features, as say, Oxfordshire’) as upon the ocean as myth and metaphor for the great mysteries of life, death, and consciousness. James Hamilton-Paterson combines scientific experience of what is below the surface of the waves with an articulation of how Ocean confounds the traditional Western binaries of light/dark, above/below, which shades into reflection on the psychic dimensions of Ocean: ‘Perhaps … the least strange thing about the Deep is the degree to which it has retained its psychic force, its sonorous and chilling stateliness, its amalgamation of height and depth, of gulfs of space and of time.’ His work is informed by familiarity with the pioneering ‘depth’ studies of Beebe and Barton. William Beebe’s Half Mile Down, an account of the first manned bathysphere descent in 1930, exemplifies scientific writing at its poetic best, informative and hauntingly allusive:

To the ever-recurring question, ‘How did it feel?’ etc., I can only quote the words of Herbert Spencer, I felt like ‘an infinitesimal atom floating in illimitable space.’ No wonder my sole contribution to science and literature at the time was, ‘Am writing at a depth of a quarter of a mile. A luminous fish is outside the window.’

This anthology differs from others of a more insistently ‘literary’ kind in its utile et dulce cast; it’s a useful book, where well-chosen scientific essays enlarge our knowledge and engage our imagination. Consider Darwin on luminosity in the extract from The Voyage of the Beagle, or Daniel Duane on waves (an essay which ends, ‘I read once about a woman who closed her seaward windows at night to keep out the lost souls that wander the ocean’s spaces’), or Deborah Cramer’s ‘Climate and Atlantic’ (2001), a beautifully nuanced historical exploration of climate change. She writes, ‘The sea murmurs and the land responds’, another reminder that evocative writing is not the exclusive domain of poets and novelists.

James Bradley is both poet and novelist. The author of Paper Nautilus (1994) has included a powerful selection of verse in his collection. The Rime of the Ancient Mariner (1798) could hardly have been excluded, but what a delight it is to find Coleridge singing along with Emily Ballou, Derek Walcott, Kevin Hart, and Judith Beveridge. (Ballou and Beveridge are two of the most distinctive voices in contemporary Australian poetry.) Like any anthology worth its salt, Book of the Ocean mixes the familiar with what is new and unexpected.

Along with canonical prose fictional texts inspired by the fountains of the great deep, Bradley includes work by Tim Winton, David Malouf, and Nam Le. ‘The Boat’, Nam Le’s harrowing narrative of the physical and political horrors of people smuggling, is one of the finest things in Book of the Ocean.

So much of this book – whether poetry, fiction, or non-fictional prose – evokes strong visual images, often drawn from the experiences of dream and nightmare. These are complemented by the American Wayne Levin’s magnificent photo essay Resident Spirits, which is a felicitous counterpoint to the textual accounts of the creatures of Ocean, our unacknowledged kindred spirits; in the cool-edged prose of Jennifer Ackerman: ‘Our reflected past and some shadow of the future is paradoxically written in our bodies. We, too, are changelings ... But for this we might be hovering just above the warm mud.’

James Bradley and Penguin Books (named after that Southern Hemisphere vestigial winged creature, denizen of the land and sea but not of the mythical Oceanic deeps) have produced a remarkable anthology. Judiciously selected from a vast corpus of writing in post-Renaissance English, arranged part-chronologically with an always surprising juxtaposition of genres, a confident linkage of Australian works  to texts from the northern hemisphere, and an overarching respect for good writing, here is a book to tease us out of, and into, thought.

Gregory Kratzmann, formerly Associate Professor of English at La Trobe University, has edited the letters and poetry of Gwen Harwood. He has published extensively in medieval and early modern literature, and is the editor of Imagination, Books and Community in Medieval Europe (Macmillan and State Library of Victoria, 2009).