The Finkler Question by Howard Jacobson

Before he met Finkler, Treslove had never met a Jew … If this was what all Jews looked like, Treslove thought, then Finkler, which sounded like Sprinkler, was a better name for them than Jews. So that was what he called them privately – Finklers … Finkler opened wide his arms Finklerishly … It was what God gave the Finklers as the mark of his covenant with them – the ability to shrug like Him. Something on which, as a non-Finkler, Treslove had missed out.

They had been at school together, Julian Treslove and Samuel Finkler. ‘More rivals than friends, but rivalry too can last a lifetime.’ Together with their former teacher and interviewer of lubricious Hollywood stars (Jane Russell, Marilyn Monroe), Libor Sevcik, an honoured Czech, they are truly Three Caballeros. Sam (‘My name’s Samuel, not Sam. Sam’s a private investigator’s name. Samuel was a prophet’) Finkler is a highly successful and, dare it be said, pushy philosopher, writer (The Existentialist in the Kitchen), and television personality. Julian Treslove, a former BBC staffer who holds ‘Auntie’ responsible for infantilising him and for reducing its addicted audience to a state of inane dependence, works, when indeed he works, as a ‘celebrity lookalike’ (Brad Pitt, say), truly a postmodern condition. Think of Baudrillard, and of the graffiti in Darlinghurst, Sydney, in the 1990s: ‘The simulacrum is the real.’

The narrative of The Finkler Question begins – if indeed it may be said ever to begin, so wonderfully does it circle upon itself, eddy and recur – when Julian Treslove, just short of his fiftieth birthday, walking home near the BBC from dinner with Finkler and Sevcik at the latter’s flat, is mugged and deprived of his wallet, his watch, his fountain pen, his mobile phone, and his amour de soi. He is convinced that his assailant was a woman. ‘Mugged by a woman! For a man whose life had been one absurd disgrace after another, this surely was the crowning ignominy. Yet it wasn’t.’ Which may, of course, imply that Fortuna has more in store for him. He is convinced that his muggeress hissed at him as she emptied his pockets: ‘You Ju.’ Unless she inexplicably said, ‘You Jule.’

So, three Jews went into a bar at the Groucho Club in London. Rather, it was three Finklers. Or, two Finklers and one would-be Finkler. And all one can think of is Groucho Marx’s immortal line: ‘I sent the club a wire stating, PLEASE ACCEPT MY RESIGNATION. I DON’T WANT TO BELONG TO ANY CLUB THAT WILL ACCEPT ME AS A MEMBER.’ But Julian Treslove does and would, aspiring as he does to Jewry, or Finklerdom. Now, whether cuckolding his best friend is a necessary or even sufficient condition of such great aspirations is at least open to question, but cuckold Samuel (some prophet!) Treslove (or should that be Treslust?) surely does. Thus, when Finkler’s wife Tyler dies relatively young, both men can mourn her, one more openly than the other.

Finkler, moved, responds to an invitation to join a group called ‘Ashamed Jews’ – ‘In the matter of Palestine I am profoundly ashamed.’ But not so profoundly ashamed that he can resist changing the organisation’s name to ‘ASHamed Jews’, ready to be reduced to ‘ASH’. In an exchange symptomatic of the novel’s comic structures, his wife taxes him that his conscience is a convenient entity, ‘There when you need it, not when you don’t. Well, I’m ashamed of your public display of shame and I’m not even Jewish.’ Finkler replies: ‘That’s precisely why.’

Howard Jacobson does not care for, or is tired of, being called ‘The English Philip Roth’, and one can sympathise. The English Mordecai Richler perhaps, or the English Michael Chabon? Possibly, dare one suggest, the English Morris Lurie? The point is that The Finkler Question – and yes, D.H. Lawrence, ‘Never trust the artist. Trust the tale’ – is a profoundly Jewish novel, and a profoundly comic Jewish novel. Not only its characters, and their locations, but also their locutions, their rhetorical structures, are Jewish, or Yiddish, like God’s shrug. For a comic novel, The Finkler Question is deeply involved with the most serious of contemporary issues, anti-Semitism and the fate of the Palestinians among them. While at times it is not much of a stretch to believe that Howard Jacobson would agree with D.H. Lawrence, who said in a letter to Lady Cynthia Asquith, ‘I like to write when I feel spiteful; it’s like having a good sneeze’ (the Finkler Freud would have relished that), it is important to recognise a quite different urge behind the novel.

For The Finkler Question is about and engendered by love. Love, or friendship, between men and men, Finklers and non-Finkler; between men and women; between men and their wives, as a tiny sentence two-thirds of the way into the novel underscores: ‘It was a terrible thing to lose the woman you loved.’ Both Libor Sevcik and Samuel Finkler lose the woman they love and, for all its antic hilarity, The Finkler Question is a lament, what Allen Ginsberg, an American Finkler, called a ‘Howl’.

‘So [said the doctor]. Now vee may perhaps to begin. Yes?’ 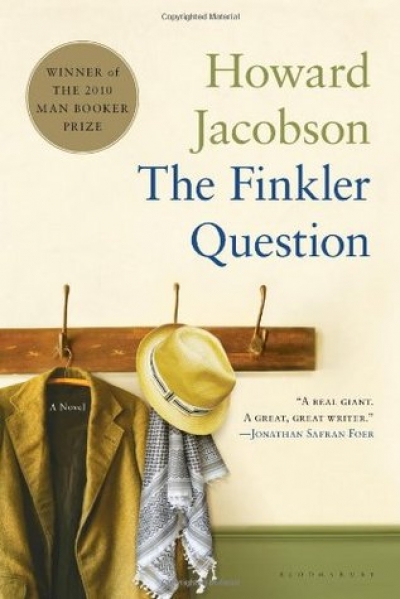