Get in line, Bruce. The world is full of those who have been done over by Rupert Murdoch. In the immortal words of George Cukor to an aggrieved actor: ‘Will you stop about being fired. Everybody’s been fired.’ So what makes Bruce Guthrie, sacked as Editor-in-Chief of the Herald Sun, so special that he should write a book about it? The answer is that Guthrie bit back and sued News Ltd (the Australian outpost of News Corporation Ltd, Murdoch’s international media empire) for breach of contract and lost opportunity over his November 2008 dismissal from Australia’s biggest-selling daily newspaper.

Following a six-day trial in the Victorian Supreme Court, Justice Stephen Kaye found in Guthrie’s favour on the breach of contract charge and strongly criticised the executives concerned – News Ltd CEO, John Hartigan, and Herald and Weekly Times Managing Director, Peter Blunden – for their lack of credibility as witnesses.

So Bruce Guthrie took on the mighty Murdoch and won, not only a handy $580,808 plus interest and costs, but vindication of his claim, restoration of his reputation, and the chance to end his executive media career on a happy note. One doesn’t sue and expect to be attractive to prospective employers, of which there are distressingly few in the Australian media. Besides, Guthrie did so at some personal and financial risk; despite the privilege of having $900,000 severance pay in the kitty, his opponent was a huge international corporation with much greater resources. And now the icing on the cake – a book in which Guthrie gets to tell the back-story and to settle old scores.

The title is based on the Journalism 101 adage that when a dog bites a man it is not news but when a man bites a dog it is. Guthrie was struggling with this concept until his son Scott came up with Man Bites Murdoch. Catchy, yes, but in the scheme of things, and without detracting from Guthrie’s courage or his victory, wouldn’t something along the lines of Minnow Nips Mammoth be more appropriate?

By going to court and exposing the inner workings of the Murdoch organisation, Guthrie certainly bit the hand that fed him, but would Murdoch care? Granted, nobody likes to lose, and Murdoch probably less than most, being, as he is, so unused to it. But a $580,808 pay-out would be loose change in the couch, and Murdoch’s behaviour over the years suggests he doesn’t give a toss for reputation, his own or that of his vast media empire, for, after all, c’est lui. 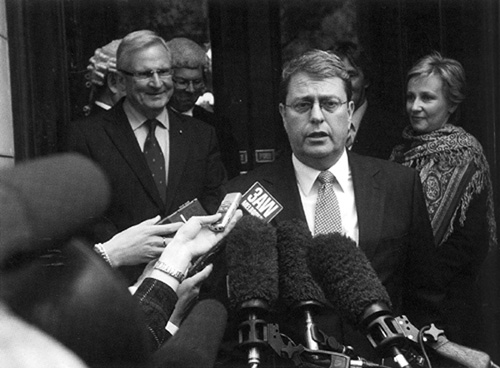 Bruce Guthrie speaks to the press after his victory in court

Even by Guthrie’s own reckoning, the most likely repercussion within the company will be the continued appreciation and promotion of John Hartigan and Peter Blunden, who, in the tradition of News Ltd culture of unswerving loyalty and servitude, will be seen to have taken a bullet for the boss. And how much will the reading public care, given that television news and the Fairfax press in particular left no turn unstoned conveying every nuance of the blokey, boorish and duplicitous News culture on show during the April–May trial, complete with backgrounders and unflattering photographs of the defendants? Since then, we’ve had the book launch and more news stories, plus lengthy extracts.

The book will, of course, be news to interested readers exclusively of the Murdoch press, who, in the tradition of dealing with negative outcomes for the proprietor, received little coverage of Guthrie versus News. They would expect to discover more about the case and its outcome, and indeed they will. But the bulk of the book is a breathless account of what our hero did next, written in the racy, tabloid style we learn that Guthrie perfected as a senior editor at People magazine in the United States, with slightly irritating cliff-hangers of the ‘but little did he know’ variety to keep the interest going at the end of each chapter.

Commencing with his childhood hospitalisation for tuberculosis and the difficulties of life in the industrial struggle town of Broadmeadows in Melbourne’s outer west, we move through Guthrie’s education to his arrival as a copy boy in 1972 at the now defunct Melbourne Herald. All of this is, of course, building a picture of the tough and fearless editor in the making, putting a person at the centre of the story, the better to humanise and drive it, as Guthrie so often reminds us, is his journalistic modus operandi.  We leap over the fifteen years of his early progress through the Herald, picking up the pace again in the mid 1980s, when he has landed the plumb job of Los Angeles correspondent. From then on, his rise through senior executive ranks is rapid, and Guthrie’s insider account of two decades of change within the media landscape reinvigorates the narrative.

Guthrie was a talented editor with an acute journalistic instinct for a story and a feel for judging its proper weight and emphasis. This was particularly evident during his editorship of The Sunday Age, a high point in his career and the inspiration for ABC Television’s drama Mercury, about a campaigning newspaper editor.

But one is left in no doubt that his book is about setting the record straight. Along the way, and through the filter of Guthrie’s burgeoning career, are some insights into the depressing decline of Fairfax, set in train by the empire-destroying young Warwick Fairfax, various subsequent owners, and incompetent boards, and driven now by the influence of the Internet. Primarily, though, the focus is on overcoming any lingering doubts about Guthrie’s possible shortcomings engendered by his sacking from News Ltd, and, before it, his forced departure as Editor of The Age in 1997, having lost the confidence of the board in the midst of his all-out war with then Victorian Premier Jeff Kennett.

Guthrie was no stranger to the News culture. He had had an unpleasant taste as Deputy Editor of the Melbourne Herald in the late 1980s, learning that, at News, audience is more important than journalism and, at an annual Aspen News Corporation love-in, having his question about ethics cut short by none other than Murdoch himself, who remarked of him later, ‘I see we have a Fairfax wanker in our midst.’ Why, then, did he go back for more, and in such unpromising circumstances? Before becoming managing director, Blunden had edited the Herald Sun for eleven years, and, according to Guthrie, regarded himself as the most influential man in Melbourne. That he was then elevated to a position from which he could defend his legacy speaks volumes about the bad management and strange culture of News Ltd. But this one surmises, together with much else, by reading between the lines in what is largely a work of self-justification.

Let’s hope that Guthrie, having got this out of the way, goes on to write more thoughtfully about the challenges facing newspapers, which was his publisher’s original idea for a book.

Jan McGuinness has more than thirty years’ experience in print and television journalism. She teaches feature writing in the School of Journalism at Monash University and is researching a biography of Shirley Hazzard.