Sir Ronald Wilson: A matter of conscience by Antonio Buti

These are parallel careers, and Antonio Buti’s biography of Ronald Wilson (1922–2005) is much concerned with the connections and contradictions between them. The book blazes into life whenever it touches on Aborigines: its framing device is the 1997 Reconciliation Conference in Melbourne, when delegates turned their backs on John Howard and what the Herald Sun called his ‘hectoring rant’. Wilson regretted their incivility, yet wondered whether Howard’s behaviour gave it justification. In 1969 a speech by ‘Nugget’ Coombs inspired Wilson to join the New Era Aboriginal Fellowship, and later to help establish the WA Aboriginal Legal Service. In 1985 he worked for three weeks as a builder’s labourer on an Aboriginal community centre. Four years later, he visited communities in Arnhem Land. Then there are the apology stories: Wilson’s ‘pilgrimage to Mapoon’ in 1990, to apologise for church acquiescence when the settlement was dispersed in 1963 to make way for bauxite mining, and his joinder with Dorothy McMahon in apologising for her momentary brusqueness towards Aborigines at a World Council of Churches assembly in 1991.

The climax, of course, is Bringing Them Home, the 1997 report of the HREOC inquiry into the ‘stolen generation’, chaired by Wilson along with Mick Dodson. The report and its aftermath take up three chapters, almost a quarter of the book. We are reintroduced to the personal stories that made the report so harrowing, to the government’s attempts to discredit it and to the feral irrationality of its media critics. The report’s call for a national apology is defended and reaffirmed. Protestations about unwarranted assumption of ‘guilt’ are rebutted by Wilson’s insistence that the point is not ‘guilt’ but ‘redemption’: ‘The only people who have talked about guilt are those who oppose the reconciliation process.’ Buti allows this material to speak for itself, but sometimes shifts his ground. He dismisses terminological quibbles about the phrase ‘stolen generation’ by adopting Robert Manne’s point: this is simply the term that Aborigines ‘have embraced for their collective tragedy’. Yet Buti later concedes that the word ‘stolen’ was indeed problematic: ‘separated’ might have been better.

So, too, with the conclusion that the policy satisfied the legal definition of ‘genocide’: the forcible removal of children ‘with intent to destroy’ a racial group. At first, Buti carefully explains the basis for that conclusion, quoting policy statements from the 1930s to demonstrate that the crucial element of ‘intent to destroy’ was indeed present. Later he retreats to Manne’s more nuanced position: that a policy aimed primarily at children of mixed descent does not itself entail racial destruction; that any direct evidence of intention is limited to the 1930s; and that even then the intention stopped short of effective implementation. Eventually, both Buti and Wilson appear to have accepted Mick Dodson’s view that the charge of ‘genocide’ was a strategic mistake.

The chapters on Wilson’s legal career are inevitably less compelling. Typically, the focus is on possible inconsistencies with Wilson’s commitments to Christianity and human rights (especially Aboriginal rights). For example, was his prosecution of criminal cases too ruthless? If so, was this because of his religious zeal and self-righteousness, or because he kept religion and law in separate compartments? The argument focuses in particular on three notorious cases: Darryl Beamish, convicted of murder in 1961; John Button, convicted of manslaughter in 1963; and Eric Cooke, hanged in 1964 while persistently confessing to several murders, including those ascribed to Beamish and Button. Attempts to reopen the Beamish and Button convictions in 1964 failed, but in 2002 (for Button) and 2005 (for Beamish) the convictions were finally quashed. Wilson’s role as prosecutor was central to all the original hearings, and his handling of cross-examination and evidence has been criticised on several grounds. Buti reviews the arguments, but leaves us to judge for ourselves.

As solicitor-general in the 1970s, Wilson had to argue before the High Court for ‘states’ rights’ at a time when such arguments could have little success. Buti dwells rather on Wilson’s activities outside the courtroom: his successful insistence that, uniquely, Western Australia should have its own Family Court to administer the Family Law Act; and his leading role in the negotiations that in 1980 secured Commonwealth legislation allowing each state to take control of its own territorial sea, to that extent reversing the practical effect of the High Court decision in the Seas and Submerged Lands Case (1975).

The background of that issue, from 1969 onwards, should have been more fully explained, though one welcomes the story of Wilson’s belief that it all would have worked out differently if only he had raised the issue in 1964. More puzzling is the treatment of Oteri v The Queen (1976), where the Privy Council held that the English Theft Act applied in Western Australian waters. Buti hails this as evidence of Wilson’s success: ‘It was as if Wilson had written the judgment for their Lordships.’ Yet one wonders if this extends to their Lordships’ extraordinary claim that Commonwealth legislative power ‘does not extend to criminal law’. Oteri is usually seen as an embarrassing example of the Privy Council’s ignorance of Australian constitutional law.

As for Wilson’s years as a High Court judge, the main focus is on two cases where his dissenting judgments went against the Aboriginal plaintiffs: Koowarta v Bjelke-Petersen (1982) and Mabo v Queensland (No 1) (1988). Buti explains both judgments as founded on ‘legal positivism’ or ‘black letter law’; but this is far too simple.

In Koowarta, Wilson and two other dissenters, including Chief Justice Harry Gibbs, would have held that the Racial Discrimination Act was invalid, on the ground that the Commonwealth’s ‘external affairs’ power, when used to give effect to international treaties, must be limited by respect for ‘states’ rights’. But restricting the constitutional text by importing political values such as ‘state’s rights’ is precisely what positivism forbids. In Koowarta – as in the Tasmanian Dam Case (1983), where Wilson also dissented – ‘positivism’ is more accurately imputed to the majority view. Besides, both Gibbs and Wilson emphasised in Koowarta that the Commonwealth did have power to legislate specifically to protect Aborigines against discrimination. (Wilson, perhaps in a typographical slip, asserted that this was possible even under the ‘external affairs’ power.)

Mabo (No 1) is another story. The eventual recognition of native title in Mabo (No 2) came in 1992, after Wilson had left the High Court (though with his approval). It was while that litigation was pending that the Queensland government, though denying that indigenous peoples had any legal claim to ‘native title’, also enacted legislation purporting to extinguish any such claim if it did exist. The High Court majority (4:3) used the Racial Discrimination Act to hold the extinguishment legislation invalid. Wilson’s dissent used extraordinary logic to argue that extinguishment of indigenous claims did not involve unequal treatment, since such claims were not precisely equivalent to non-indigenous property claims. Buti explains this as settling for ‘formal’ rather than ‘substantive’ equality; but Wilson well understood that distinction, as his later work in HREOC shows. What was involved in Mabo (No 1) was more like insistence on substantive equality, at an irrelevant and inappropriate level.

Again, the real explanation is Wilson’s solicitude for states’ rights. The practical effect of his judgment would simply have been to save state legislation from being overridden by a Commonwealth law – exactly what he achieved, again with tortuous logic but with more politically correct results, as one of the majority in Ansett Transport Industries v Wardley (1980, saving Victorian sex discrimination provisions) and Commercial Radio Coffs Harbour v Fuller (1986, saving NSW environmental law).

The real point is that any assessment of Wilson’s judicial contribution requires a far wider sampling of his diverse and often ingenious judgments – including, at the very least, his critique of Commonwealth ‘tied grants’ in the DOGS Case (1981), and his remarkable change of mind in Baker v Campbell (1983), with its emphasis on the common law as ‘serving the ends of justice’.

The book is uneven. Names are sometimes misspelt (Hal Wootten, Graham Fricke). Dates are sometimes wrong (a prison visit to Cooke was in 1964, not 1963; the Perth ‘stolen generation’ hearings were in 1996, not 1997). Imperfectly executed editorial changes sometimes leave grammatical oddities. The opening chapter, recalling Wilson’s orphaned and impoverished boyhood, fails to capture the poignancy and pathos of the material. Yet the closing account of Wilson’s decline and death, set against the background of Bringing Them Home, is profoundly moving. Like Wilson himself, the book is most powerful when the issues are most important.

Tony Blackshield is a Fellow of the Academy of Social Sciences in Australia, an Honorary Professor of the Indian Law Institute, New Delhi, and an Officer of the Order of Australia. 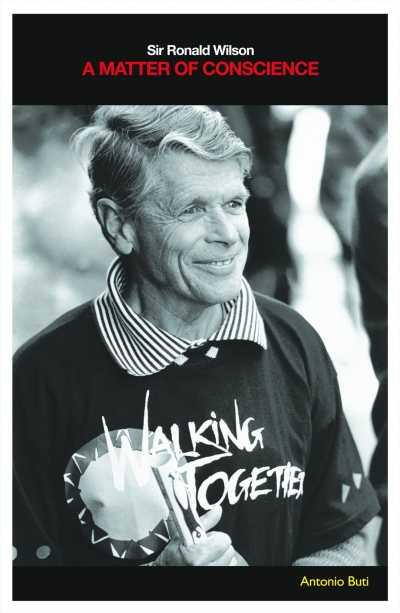