Cultural Amnesia: Notes in the margin of my time by Clive James

A writer leaves you with everything to say. It is in the nature of his medium to start a conversation within you that will not stop until your death …

Conversation is the raison d’être of this monumental monologue. But you might not think so if you read only the reviews. Splenetic, greensick criticism – and there has been plenty of it – insists that what Clive James has built out of a life’s voracious reading and careful noticing – his ‘notes in the margin’ – is a platform for his ego. Not so. But how ruthlessly we skin our own.

Cultural Amnesia, as I read it, is a book of invitation, not dictation. Yes, it is daunting in length and ambition: a digressive, eccentric articulation of a profoundly held credo of humanism (‘our best reason for having minds at all’). It is a prodigious amateur’s scan of the culture and politics of the twentieth century, a century made even more terrible than the calamitous fourteenth, with its plagues and wars, because our modern science and technology enabled mass murder, and because a coincidence of evil gave us human monsters avid in the systematic annihilation of their own kind. And yes, because Clive James writes about what he most loves, hates and fears rather than about his academic or professional specialism (though there is an impressive quantity of the latter in the anatomising of writing and performance), the volume of conversation is sometimes turned up so high you can’t hear your own voice. Verbal shot put takes over from Viennese café conversation. But not for long, and not for keeps. The dominie impulse in Clive James is more the reflex of an impassioned teacher than the edict of a megalomaniac. He wants to show you the whole world, not take it away from you, or take you out of it.

The more I read, the more I succumbed to the tickled reader’s urge to quote –

‘Hang on, listen to this ...’ No adjacent creature – human or animal – escaped. The lorikeet outside the study window clearly wasn’t properly appreciative of the memoirs, or indeed the dancing, of the Maryinsky darling and Diaghilev protégée, Tamara Karsavina, so while I cheered aloud at a heroine given her dues by Clive James tango dancer, the bird merely ruffled his tail feather in a riot that Leon Bakst would have admired – and copied. My husband was more receptive – this time to the insider’s analysis of Tony Curtis’s comic genius (remember his Cary Grant spoof in Some Like It Hot?), of his ‘precise way of pointing a line’. The performer applauding the virtuosity of another performer. In a rueful concluding tribute (which I will not presume to excavate for biographical insight), Clive James honours Tony Curtis thus: ‘Like the eloquent man who gets no points for the poetry he writes because he talks well anyway, Curtis was always underrated for his accomplishment because of his screen presence … however, Curtis, apart from a physical beauty that was built to last, had another gift that was rare and precious. He was a writer’s actor. When he spoke it, the language came alive.’

My response overall was delight – a legitimate response to a work, and an indicative one, but a first response. Rereading demanded more concerted thinking. What to make, for example, of the alphabetical taxonomy of such an immense compendium, in which James’s motley cast of characters butt up against one another without apparent reason. I read the individual sections before tackling the introduction, so Edward Gibbon was succeeded by Terry Gilliam, Montesquieu by Alan Moorehead, Norman Mailer by Nadezhda Mandelstam, Evelyn Waugh by Ludwig Wittgenstein, and Tacitus by Margaret Thatcher, without benefit of explanation. But as James speaks of his ostensible subjects (his writing is so evocative of his vocal rhythm and timing that ‘speaks’ is apt), the connections emerge like new grass, with roots spreading and meshing. Their language, and his language, comes alive, with no Babel about it.

When Miles Davis follows the romance philologist Ernst Robert Curtius, the point of intersection is Thomas Mann, who was criticised by the patriot Curtius for disloyalty to Germany when Mann went into voluntary exile after Hitler came to power. The exile and consequent disconnection from his publishers and German readers cost Mann dearly: the life of art is fragile, even for celebrated artists. Jazz trumpeter Davis, far away and secure, at least in income, is quoted as dismissing his critics like this: ‘If I don’t like what they write, I get into my Ferrari and drive away’.

Of course, it is never that simple, as the artist in James knows. Davis was lucky, as well as immensely talented. Other human beings have not been so lucky. The poet Nadezhda Mandelstam, quoted by James, remarks of the Russian concentration camps, that ‘[c]aution did not help. Only chance could save you.’ And there were things Miles Davis couldn’t or wouldn’t drive away from or save himself from. James quotes Charlie Parker, who would have known, on the artistic cost of Davis’ drug addiction: ‘Anyone who says he is playing better either on tea, the needle, or when he is juiced, is a plain, straight liar.’

Charlie Parker leads us through Miles Davis to F. Scott Fitzgerald, whose drinking abetted the disaster of his marriage and the disintegration of his career. James’s conclusion: that ‘Fitzgerald’s prose style can be called ravishing because it brings anguish with its enchantment’. In Fitzgerald, literary style and life are tragically, intimately connected.

The detailed argument about such connections, and about the ineffable, indefinable (not necessarily redemptive) nature of genius, in music, in literature, in art, form central concerns of the book. If I sometimes found James’s view of artistic –

shall I call it licence? – too tolerant, too romantic, I would at least have a good fight on my hands were I to argue chapter and verse on particular artists. One of the glories of James’s undertaking is his detail, the depth and familiarity he brings to argument about contentious cases. And contentious many of them are. I want to be there when the French read his onslaught on Jean-Paul Sartre. Not for nothing does the acute and astute J.M. Coetzee weigh his words of printed praise on the book’s cover: ‘Aphoristic and acutely provocative: a crash-course in civilisation.’

A crash-course it is, with fortuitous collisions. I called James’s cast ‘ostensible subjects’, because they are more springboards for reflection than their brief biographical-format treatment promises. But that way Victor Klemperer, indispensable diarist of the life of Dresden Jews before the Final Solution, can drop into the exemplary essay on Montesquieu. Bertolt Brecht can call on the critic Marcel Reich-Ranicki, and the Jewish Diaspora roam through the entire book.

Sometimes, though, one wants more, or more focus. When James claims, for example, that it is hard to meet the philosopher Ludwig Wittgenstein’s dictat that we should not be seduced by his language, one is inclined to respond that it might be worth a try. James realises that Wittgenstein was one of the most important and influential philosophers, in the analytical tradition, of the twentieth century, but after reading the section devoted to him, one wonders why. Where has the philosophy gone? In English translation, Wittgenstein was a remarkable, sometimes hypnotic writer and aphorist. In German, (and James reads him in German), he was a master. But to laud the hypnotic stylist-philosopher, ‘who matters to the writer’ over the ‘Wittgenstein that matters to the professional philosophers, but they can prove it only to each other’, is to drop the ball.

When James writes, as he does so incisively, about the rhythms or hinges of poetry, or the negatively-capable subtlety of great European criticism, or about the dynamics of American television performance and the component parts of comedy, he is in his element, and can take us with him. Why not allow the philosopher the complexity and recalcitrant difficulty of his own element? That would be better than praise. One thing: about Wittgenstein’s later detachment from everyday life James is right, and his judgment, that ‘the result was a chilling hermeticism in his frame of reference’, is also an index of James’ contrasting and full-blooded critical engagement with his, and our, turbulent times. There is something bracing and hopeful about the way Clive James runs at the world and grabs the mantle of critic as he passes. It is a moral enterprise, James says, one that requires humility, but ‘the kind of humility that needs an air of arrogance to protect its Delphic mission’. 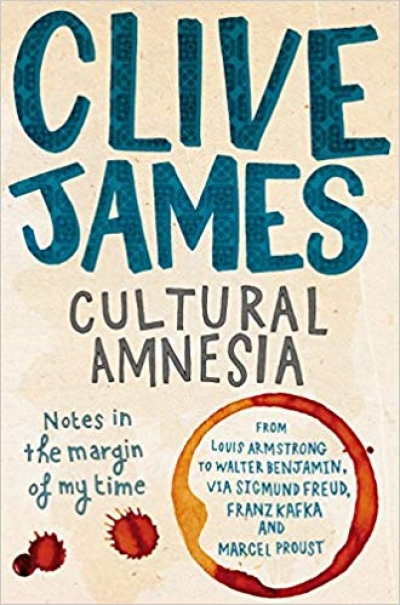 Cultural Amnesia: Notes in the margin of my time