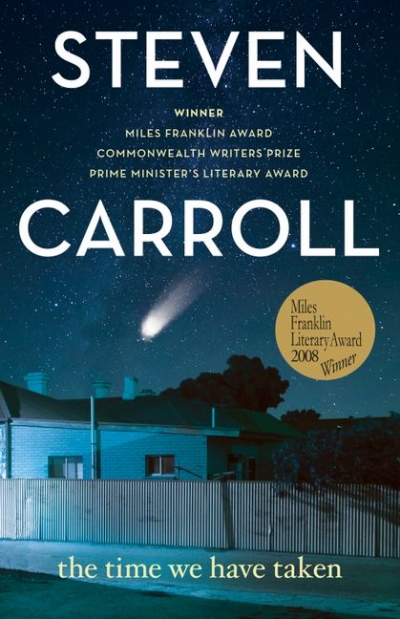 The Time We Have Taken

Steven Carroll’s The Time We Have Taken is the latest in his trilogy – with The Art of the Engine Driver (2001), The Gift of Speed (2004) – about a northern suburb of Melbourne. Referred to only as ‘the suburb’, this anonymity serves to make it a universal place on the fringes of any Australian city.

Known to the reader of the two earlier novels, first as a child and then as an adolescent, the main character Michael is now a university student and first-year teacher at his old school. This maintains his day-to-day connection with the suburb, although he has now made a partial escape by living in a communal house in the inner city. A student of literature, he habitually reads the classics of the English canon until a teaching colleague loans him a book that he thinks Michael should read:

He stares at the cover, the title My Brother Jack (not a good title), the author’s name, George Johnston (he has never heard of him), then opens the book where he left off. He has only just begun to read it, but he already knows that he is doing more than just reading another book. There is something about the reading of this that feels like what he can only call an event. He is not simply reading another book, it is, he knows, much, much more than that. For when he reads this book, he sees, for the first time in his reading life, the world from which he comes. And, when he looks up from reading, and takes in this world from which he came and through which he now moves, he sees it differently.

The Time We Have Taken