Poetry and Bondage: A history and theory of lyric constraint by Andrea Brady

Andrea Brady’s monumental study of poetry and constraint focuses on ‘the ways that poets invoke bondage as metaphor while effacing the actuality of bondage’. Milton’s aspiration to deliver poetry from ‘the modern bondage of rhyming’, and Blake’s injunction that ‘poetry fetter’d, fetters the human race’, associate formal freedoms with political liberation. The modernist discovery of free verse was quickly followed by a formalist reaction in the 1940s, which was in turn displaced by renewed experimentation over the following decades. Yet poetry always and inevitably imposes boundaries on experience, and Oulipian or procedural devices are just another instance of this shaping practice. Brady is not occupied with tired oppositions between neo-formalist and free verse approaches – though a concern with prosody is foregrounded in her analysis. Rather, the focus of her work is a fierce interrogation of the lyric mode itself, and what she identifies as a ‘lyric whiteness’, both in its historical and contemporary formulations.

Brady is herself a significant late modernist practitioner, associated with the field of British writers who have followed the experimental Cambridge poet J.H. Prynne, including Keston Sutherland and John Wilkinson. The political radicalism of the late Sean Bonney – a dedicatee of this book – is also evident in Brady’s firm emphasis on a poetics of commitment. These poets share a suspicion of the lyric mode, with its assumption of a private subject venting emotions in transparent language, secluded from social concerns. Brady positions this conception within John Stuart Mill’s definition of the poem as self-enclosed soliloquy, ‘like the lament of a prisoner in a solitary cell … quarantined from sociability’. This can be further traced to Hegel’s Lectures on Aesthetics, in which the solitary lyric poem is distinguished from, and elevated above, simple and direct collective ‘song’: within the constrained space of the lyric, according to Hegel, ‘the poet’s own subjective freedom … flashes out’. As Brady asserts, there is a racial undertone to this distinction, which underwrites ‘the coupling of whiteness and lyric’.

This raises important questions within the recent history of poetics and its reception. Postmodern poetry critics of the 1990s, such as Marjorie Perloff and Charles Bernstein, were often dismissive of multicultural poetries, arguing that a shared formal reliance on lyric strategies (a stable speaking subject enouncing personal or familial history), led to similitude rather than an assumed ‘diversity’. This is complicated by the enduring model of the Black Arts movement, with its liberationist (via Frantz Fanon) claims for the assertion of identity: this influence can be seen in Aboriginal protest poetry (such as Kevin Gilbert’s 1988 anthology Inside Black Australia) and continues in spoken word practices across a wide diaspora. I would argue that Australian multicultural poetry – from the Steinian writings of Ania Walwicz to the polyglot dialect of Π.O. – has mainly resisted this reductive categorisation. Certainly, local work by writers from the past decade, such as that of Natalie Harkin and Bella Li, has directly contested the assumptions of the lyric mode.

Brady’s central example, and a crucial model within such contemporary practice, is M. NourbeSe Philip’s Zong (2008), which recollects in highly fragmented form an infamous 1781 maritime massacre that activated the anti-slavery movement. Philip’s poem, a radical rearrangement of archival documents, works within the ‘constraint’ of limited source material. It is also deliberately anti-lyrical in its refusal of both narrative and subject positioning. As Brady notes, the poem exemplifies the ‘indeterminacy’ and openness of meaning that critics like Perloff identify as central to the postmodern poem. Its structure of relational patterning also links it to late modernist practices of paratactic arrangement, such as in the poetry of Charles Olson. But, as Brady argues, these formal qualities are exceeded by the poem’s political goals: fragmentation and mutilation at the level of the syllable provide a mirror for slave experience. As Philip herself says, ‘I wanted to destroy the lyric voice’, replacing the lyric ‘I’ with a multivocal, communal subject that directly reorients the hierarchy of Hegel’s distinction between lyric and song.

Another key text, Rob Halpern’s Common Place (2015), utilises a similarly limited documentary source – the autopsy report on a Yemeni detainee who suicided in Guantánamo – recalling the use of legal documents by Objectivist poets like Charles Reznikoff. But Halpern’s approach is anything but objective, his eroticised projections on the body of the deceased – which Brady concedes are ‘disturbing’ and ‘deliberately shocking’ – are an excessively pornographic ‘rendition’ of the Petrarchan lyric evocation of the qualities of an absent beloved.

Brady’s critical method resists enclosure in a similar manner: her historicist approach, swerving beyond the poems to engage with sociopolitical backgrounds, draws attention to John Keats’s slave-owning brother and Sir Thomas Wyatt’s experiences of incarceration. It is no digression that one of her turns describes the racist history of the Southern Agrarian movement, and the early support for segregation by New Critics such as Allen Tate and Robert Penn Warren; nor is it hyperbole when she likens their conception of the poem as ‘well-wrought urn’, the central critical tenet for the reception of the lyric, to an idealised plantation free from modern industrial influence.

The historicism that Brady opposes to this formalist approach is most evident in her deployment of ‘figural method’ (after Erich Auerbach) to draw synchronic parallels between contemporary examples and canonical figures within the history of the lyric form. Her approach reveals complicities that in each instance undermine Mill’s definition of poetry as solitary self-enclosure. The turn towards private experience in Ovid’s tropes of love as slavery and as a substitute for military service apparently subverts the imperial order but also reproduces its social practices. Wyatt’s English Petrarchism ‘speaks only for himself, performing enslavement as dissent’. Emily Dickinson, the epitome of the bounded and solitary reclusive poet, is positioned in terms of her lack of sympathy for the cause of emancipation.

Against this, Brady provides examples of actual incarceration and genuine suffering. A harrowing chapter on the use of solitary confinement in the US prison system presents contemporary prison poetry as a space in which ‘lyric’s promise’ becomes ‘a form of resistance’. This transcends their value as sociological artefacts, and even the liberationist claims of the Black Arts-inspired prison writings of the 1960s and 1970s. Describing the extreme isolation of ‘control units’, and the symptoms of states of hallucinatory dissociation these produce, Brady gives the example of Bob Kaufman’s ‘Jail Poems’ (1960), which culminates in a visionary and explicitly Rimbaldian erasure of self, in which ‘I am not me’. As the critic George Fragopoulos says of these works, Kaufman ‘is not interested in creating a new kind of identity or subjectivity. He is, instead, attempting to utterly erase the subject position from the lyric itself.’ 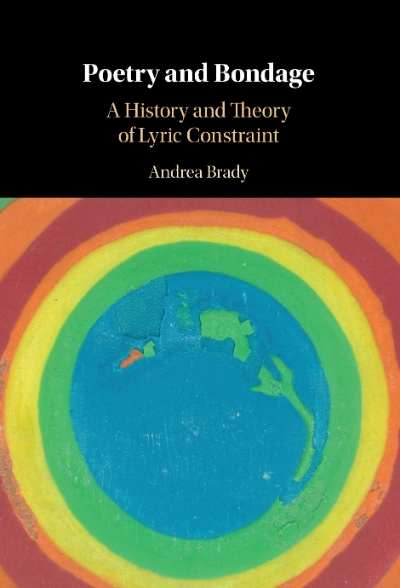 Poetry and Bondage: A history and theory of lyric constraint