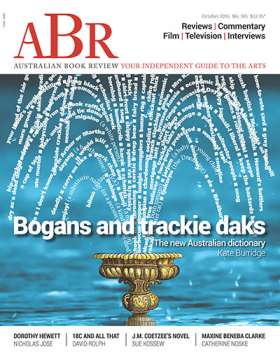 Highlights of the October issue include Kate Burridge's assessment of the colourful, yet 'selfieless' new Australian National Dictionary and David Rolph on 'the most famous statutory provision in Australia' - section 18C of the Racial Discrimination Act. Other highlights include Catherine Noske on two books by Maxine Beneba Clarke, Dennis Altman on a new biography of Jack Mundey, Sue Kossew on J.M. Coetzee's new novel, Critic of the Month James McNamara on Dark Money, and David Smith on David Cay Johnston's three-decade pursuit of 'con artist' Donald Trump, as well as Nicholas Jose on Dorothy Hewett, a new short story from Cate Kennedy, and poems from Jill Jones, Stuart Cooke, and Poet of the Month Sarah Holland-Batt. We also review new fiction from Hannah Kent, Ann Patchett, Jock Serong, Rajith Savanadasa, and Michelle Wright.

'The debate over 18C' by David Rolph

The Making of Donald Trump by David Cay Johnston

Hitler: A Biography: Volume I: Ascent, 1889–1939 by Volker Ullrich, translated by Jefferson Chase

The Schooldays of Jesus by J.M. Coetzee

Dark Money: The hidden history of the billionaires behind the rise of the radical right by Jane Mayer

'Bobbin Up by Dorothy Hewett' by Nicholas Jose

Saved to Remember: Raoul Wallenberg, Budapest 1944 and after by Frank Vajda

The Good People by Hannah Kent

Pitch of Poetry by Charles Bernstein

The Rules of Backyard Cricket by Jock Serong

Hume: An intellectual biography by James A. Harris

East West Street: On the Origins of Genocide and Crimes against Humanity by Philippe Sands

'The Changing Room' by Sarah-Holland Batt

'The Worst of It' by Sarah Holland-Batt

Phillip Schuler: The remarkable life of one of Australia’s greatest war correspondents by Mark Baker

Rise of the Machines: The lost history of cybernetics by Thomas Rid

Iron in the Blood: A musical adaptation of Robert Hughes’s 'The Fatal Shore' by Jeremy Rose

The One King Lear by Brian Vickers

Australia: :A German traveller in the age of gold by Friedrich Gerstäcker

by Hidden Author
Poet of the Month

Sarah Holland-Batt is Poet of the Month

by Australian Book Review
Critic of the Month

James McNamara is Critic of the Month