The Haha Man by Sandy McCutcheon

It’s not racism that makes my mother – once a poor girl from the Welsh valleys – side with the Howard government on the refugee issue: it’s an instinctive territorial defensiveness that can be easily exploited by emotive phrases: illegals, queue jumpers, people smugglers. She’s not alone, if her friends, other relatively prosperous, tax-paying senior Australian citizens, are anything to go by; but it’s not a hardline position. All it might take to soften their attitude is a copy of The Haha Man by Sandy McCutcheon, a rollicking good read that highlights the refugee plight without a whiff of the lecture hall.

McCutcheon, no doubt familiar to many readers as an ABC radio journalist, has a remarkable number of other strings to his bow. He has written twenty-two plays and six novels, lived and travelled abroad a good deal, dabbled in various jobs, and been a Buddhist for twenty-five years. Judging from the awards he has collected along the way, he brings to his interests a well-informed flair. He joins a list of high-profile Australian writers who have, in very different ways, questioned this country’s response to asylum seekers, by and large with one purpose in mind: to change public opinion. (I can’t think of a single book that endorses the government’s stance.) With this in mind, it’s a fair bet that The Haha Man, a paperback emblazoned with the typography of the thriller, has the edge over its most obvious predecessor, Tom Keneally’s The Tyrant’s Novel. 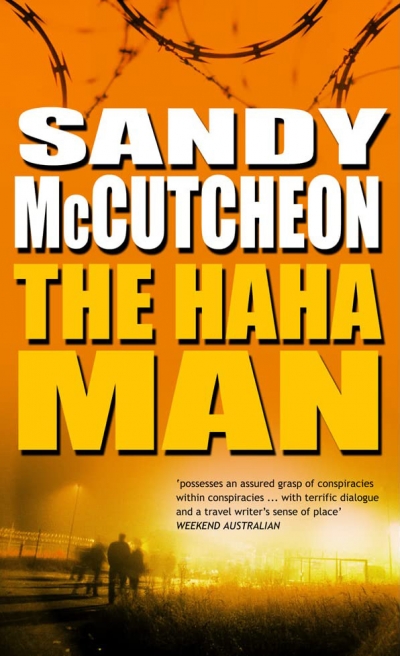