In his introduction to this year’s Melbourne Festival, Artistic Director Jonathan Holloway emphasised the need for people to step away from the hateful invective festering in public discourse and to note the bigger picture of humanity’s journey. ‘The last couple of years – globally – have not been our best’, he says in the Festival program. This era of ‘Brexit and Trump’ – a term that has become journalistic shorthand for the embodiment of society’s ills rolled into two potentially disastrous events – now includes, for Australians at least, the ‘No’ campaign against the ghastly idea of giving all people in this country equal rights. Holloway’s answer to Brexit, Trump, and No (an ideal name for the world’s worst law firm) was a festival program that explored humankind’s ability to dispel such ugliness and fear through expressions of beauty and compassion via dance, film, music, theatre, and song. Who better to lead this charge than the inimitable Taylor Mac?

Taylor Mac’s The Inauguration (★★★★) uncorked the festival with a bang at Hamer Hall. The American playwright and performance artist introduced audiences to an abridged ninety-minute version of judy’s (‘judy’ is Taylor Mac’s preferred gender pronoun, possibly adopted as a means of giving copy editors a minor embolism) epic twenty-four-hour ‘ring cycle’ of popular music from 1776 to the present, performed in four parts across the festival. judy resembled a glam-rock sea anemone, in a multi-coloured, sequined dress; a pink feather boa; and later a spiny, kaleidoscopic crown. The lurid musical renditions were peppered with wry anecdotes and political observations. It was a nice touch for Mac to allude to the absurdity of Australia’s same-sex marriage postal survey and its stance on asylum seekers, as the show was structured around the complex history of the United States and its attitude towards the LGBT community and racial minorities.

Audience participation is unavoidable in Taylor Mac’s shows, and no one was entirely safe from judy’s whims. Those who were plucked out and dragged on stage took it in their stride, whether it was providing a long ostinato of short sharp breaths as backing vocals to a rendition of Tori Amos’s ‘Precious Things’, or standing awkwardly on stage while the audience pointed at them and one another during Taylor Mac’s take on Laura Branigan’s 1982 hit ‘Gloria’ (originally sung by Umberto Tozzi in Italian). This reviewer didn’t predict that he’d be instructed to slow dance tightly with a total stranger that night – I think his name was Andrew – to Taylor Mac’s version of Ted Nugent’s ‘Snakeskin Cowboy’, whose homophobic rock dirge was rearranged into a gentle, soothing high-school prom ballad. The Inauguration was only a small taste of things to come, but it announced the arrival of Taylor Mac at a perfect moment in Australia’s political history. More on judy later. 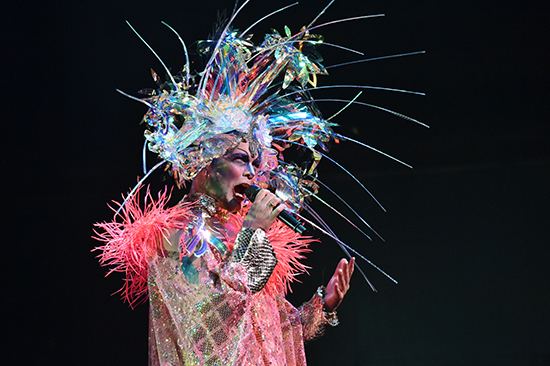 Two films featured in this year’s festival. Voyage of Time: Life’s Journey and Dark Circus, were at polar ends of the spectrum of scale and of likeability. The big-budget Voyage of Time (★★), directed by Terrence Malick, told the story of Earth’s formation, and the evolution of its creatures, through a series of striking visuals accompanied by a live orchestral score, which was performed admirably by the Melbourne Symphony Orchestra and the MSO Chorus. Despite the Malick’s impressive use of CGI effects, especially during the early interstellar and planet forming sections of the narrative, and one moving, balletic sequence involving whales, the film felt hollow, and, at times, pompous.

Voyage of Time mostly comprised sequences stitched together, often from the cutting room floor of Malick’s better, earlier film The Tree of Life (2011) and various pieces of nature documentary footage. At the beginning of each ‘chapter’ in the evolutionary story, Cate Blanchett would interject with snippets of insipid narration, such as ‘Mother, where are you?’, ‘Mother, what is this world?’, and ‘Mother, did love make me?’ Brad Pitt narrates a forty-five-minute version of the film, currently showing in theatres across Australia, but Blanchett was the preferred choice for this longer treatment. Small mercies. Bizarrely, in this longer version, Malick chose to crowbar in shaky handheld footage of overcrowded sub-continental or Middle Eastern streets, refugee camps in disarray, and harrowing scenes of sacrificial bull slaughter in an unnamed Southeast Asian country between the more polished filmic sequences, presumably to illustrate humanity’s depravity, but in doing so, he appeared to shake a condescending finger at some of the world’s most disadvantaged people. The night was barely salvaged by the efforts of the MSO and its chorus, who performed faultlessly, and managed to convey the magnificence of Earth’s ‘creation’ through music and song by composers such as Bach and Arvo Pärt, more commendably than Malick’s flawed vision.

A production that must have cost a fraction of Voyage’s budget but produced a more pleasing result was Stereoptik’s Dark Circus (★★★★1/2), a wonderfully choreographed and entertaining, black-and-white live film projection piece by Romain Bermond and Jean-Baptiste Maillet. The French duo used a number of practical effects, including inks, shadow puppets, sand, water, light, video, and various musical instruments in concert to tell the story of a gloomy, macabre circus, its exploitative ringmaster (‘Come for the show, stay for the woe!’), and its performers, most of whom, including a trapeze artist, a lion tamer, and a knife thrower, meet their grisly demise in a number of amusing and inventive ways.

It was remarkable to see a few blots and dashes of ink slowly become a cityscape, or how a simple wipe of the hand could change the perspective of a scene fashioned entirely by sand. Video clips were also cleverly incorporated in the projection and blended seamlessly with the live illustrations, and the audience gasped with astonishment when a single drop of black ink was added to a canvas painted entirely with invisible ink to reveal a portrait of the circus’s juggler. A funk and soul soundtrack that swung between moody, spaghetti western, and Jacques Tati-esque, was provided by one of the duo throughout the film. He flitted effortlessly between his guitars, keyboard, and drums, as well as various forms of puppetry. In keeping with the festival’s overall theme of overcoming darkness with light, the show burst into colour at its charming denouement involving the entire cast of characters. 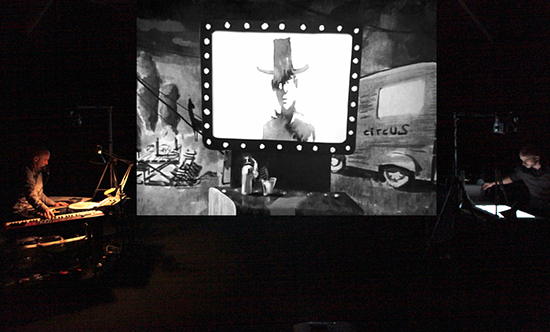 Dutch amateur composer Joep Beving (★★★★) is a relative newcomer to the world of contemporary piano. Beving’s popularity soared after his first solo album, Solipsism (2015), ‘went viral’ on music streaming platform Spotify, garnering tens of millions of plays within a relatively short period of time. His compositions are bite-sized, averaging around four minutes or so, and with a musical background in jazz and electronica it would be easy to dismiss him as yet another transient online sensation for the music-on-demand generation. However, his gentle, minimalist works are deeply poignant; simple and straightforward, yet beautifully constructed and cinematic, they stem from darker, lonelier emotions – Solipsism was composed in the wake of a close friend’s death, as an exercise in catharsis – yet they evoke feelings of optimism and wonder.

Highlights of the performance included the gently pulsating, flowering ‘Ab Ovo’; ‘Sleeping Lotus’, a moving love letter to his daughter (named Lotus); and the lively, forceful ‘Hanging D’, which ends in a flourish comparable to the ‘continuous music’ technique of maestro Lubomyr Melnyk. Unfortunately, Beving’s recital was tarnished by all too frequent smatterings of concert cough. The gentle giant (he stands at a whopping six feet ten inches) laughed it off between songs and chalked it up to Melbourne’s wintry weather, but one wishes that he could have taken Alfred Brendel’s firm approach and asked the offenders to simply stop. Luckily, audiences can easily access Beving’s work on streaming platforms like YouTube and Spotify, sans phlegm.

One could be forgiven for approaching a six-hour show with no interval and heavy audience participation with some apprehension. However, the Forum Theatre was the perfect venue for each chapter of Taylor Mac’s A Twenty-Four Decade History of Popular Music (★★★★★). Audience members could nip to the bar during costume and song transitions, and also hide in shadows and behind pillars when judy and his ‘dandy minions’ roamed the aisles looking for the next patsy. But few did hide – most were swept up in the carnival atmosphere of each part of this all-encompassing, outlandish ode to American history told through song.

A Twenty-Four Decade History of Popular Music was split into four chapters: Chapter One (1776–1836) covered the American Revolution, Women’s Lib, and colonisation; Chapter Two (1836–96), the Civil War era, and The Mikado set on Mars, where an audience member was dressed like an alien, instructed to sing ‘Tit Willow’ whilst sobbing, and then ‘marry’ Taylor Mac; Chapter Three (1896–1956), World War II and the Depression, where audiences members were forced to ‘emigrate’ from Eastern Europe (the back rows) and huddle at Mac’s feet as he sang; and Chapter Four (1956–present), sexual deviance, radical lesbianism, and AIDS, where two giant inflatable penises painted in the US and Chinese flags surfed the crowd and ‘butted heads’ to David Bowies ‘Heroes’. 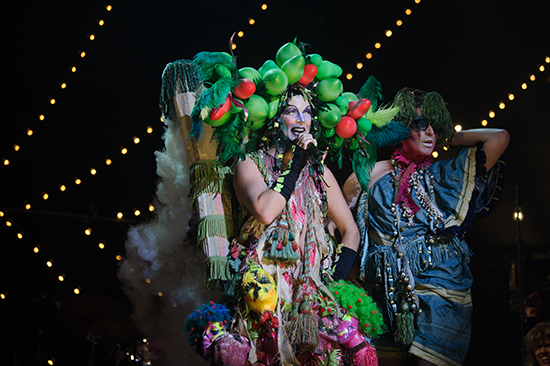 Rather than being an exercise in camp identity politics – in fact judy pokes fun at the more asinine features of liberal thinking, like the concept of ‘safe spaces’ – Taylor Mac’s magnum opus is an elegy to communities that have been devastated throughout American history, but that had the strength to rebuild, endure, and thrive in the face of hatred and suspicion. If only there were a way to bottle Mac’s antidote to prudishness and conservatism, and sell it to the naysayers here.

It is unfortunate that festival-goers stepped out of shows only to be greeted by a huge NO scrawled on the sky. For the most part, though, Jonathan Holloway’s scandalous support for universal peace throughout the festival program worked – for a few hours in the concert halls, anyway.