Degas: A new vision is an exhibition of 206 works selected and presented by Henri Loyrette, the distinguished Degas scholar, former director of the Musée d'Orsay and subsequently director of the Musée du Louvre. In its range and variety the exhibition confirms the verdict of the writer and critic Edmond de Goncourt, expressed in 1872, that Degas was the man who, of all his contemporaries, best captured 'the soul of modern life'. Visitors to the exhibition who know Degas best as a painter of graceful ballet scenes will find those works illuminated – and their sense of Degas's versatility much extended – by the wider social context in which these famous dancers here are placed. 'Little rats', Balzac had called these underpaid, underfed nymphs of the ballet, who often eked out their meagre earnings through prostitution: a view the present exhibition may help us understand.

The Paris of Degas and the impressionists was the city of light, reshaped by Haussmann during Napoleon III's Second Empire. It is also the more darkly shaded city of Victor Hugo's Les Misérables – and of Hugo's strangely abstract pen-and-ink drawings, which Degas admired when exhibited at the Galerie Georges Petit in 1888, and by which he may have been influenced for his 1892 monotypes. Early in his career, Degas had exhibited with the impressionists, but he came to object to their plein-air methods of painting directly from nature. Believing, with Baudelaire, that art moved independently of nature, he chose the studio instead as his workplace, trusting more deeply in the power of the imagination, and creating lyrical landscapes in his monotypes (single imprints, made from inked plates directly to paper) that herald the abstract forms of twentieth-century art. Yet Degas was also, as Goncourt perceived, a realist and social analyst. His art vividly captures the sense of alienation that pervaded life in the recently modernised city, both for the well-to-do bourgeoisie and for the underclass of workers, such as laundresses, dancers, prostitutes.

Degas's painting In a café (1875–76), otherwise known as The absinthe drinker, portrays a common vice of the city that Emile Zola would also depict a few years later in his novel L'Assommoir (1877). 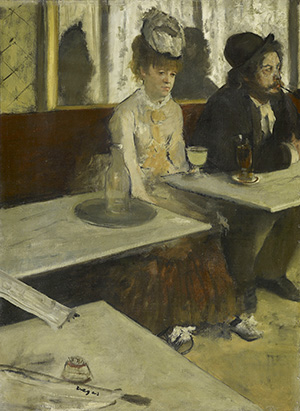 The composition within this work is not taken directly from life, but was modelled instead by Degas's friends, Marcellin Desboutin, the engraver, and the actress Ellen Andrée. Although it resembles a double portrait, it is something altogether more subtle: an allegorical study of the loneliness and desolation of modern urban life. The couple sit side-by-side yet as if estranged at the café La Nouvelles Athenes, their crumpled clothes carrying an air of dejection. The café itself appears empty, the only reflection in the mirror being that of the backs of the two figures.

Degas captures the same sense of social separation in his painting of the Bellelli family, whom he visited in Florence in 1857–58: a work which (according to Loyrette) he then executed in his studio in Paris a decade later, in 1867. The figures in this realistic group portrait are immediately identifiable as the artist's aunt Laura, Baroness Bellelli, and her Neapolitan husband Gennaro, Baron Bellelli, together with their two daughters. Assembled in their elegant living room, this family are clearly products of quite another social class, but share with the Parisian absinthe drinker and her partner the same sense of isolation. The pregnant Laura, a melancholic and unhappy woman, is drawn with the clear neoclassical precision that Degas had learnt from Ingres: she holds her balance by resting her hand lightly on the table, while her husband is thrust to the edge of the composition. Once again, no eye contact unites the group.

Baudelaire wrote that Degas 'loved the human body as material harmony, as beautiful architecture with the addition of movement'. The exhibition traces Degas's love of the body: now naked, now clothed, now in motion – like his dancers – now reflected in natural forms, as in Landscape 1890–93 (a monotype in ink and pastel). As Degas developed as an artist, even the naked bodies he painted began to show signs of social difference and discrimination. Early in his career, studying with Louis Lamothe, a former pupil of Ingres, he admired and attempted to copy Ingres's Bather, a painting owned by Edouard Valpinçon, a friend of Degas's father (the banker Auguste De Gas), depicting a naked woman seen from behind, seated on the edge of a bed. Before long, however, Degas began to reject Ingres's elegant neoclassical line and to apply broader contours and layers of pervasive colour in the manner of Delacroix. His progress is evident in four drawings in the first room of the exhibition, of female nudes viewed variously from the front and from the back, their faces concealed by their hair. The two earliest studies from the early 1860s are in the linear tradition of Ingres, while the two later studies of 1882 and 1905 are energetically drawn with broad contours, and more emphatic outline and shading. 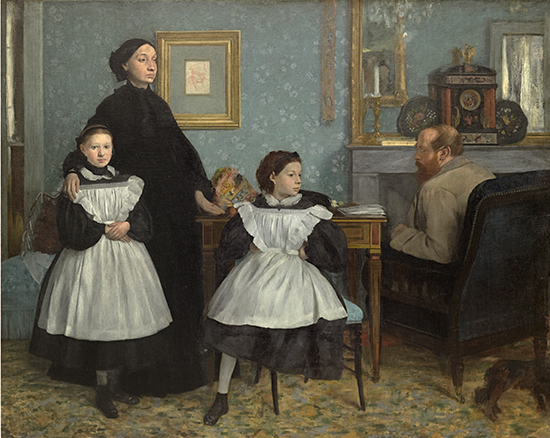 The progress is away from classicism and towards a form of social analysis. In Woman seated on edge of the bath sponging her neck, Degas shows the real and well-fleshed body of a bourgeoise who can afford the luxury of a bath. In other compositions from this period, his naked women are combing their glossy long hair or luxuriating in the joys of the toilette, sometimes assisted by maids. While the pose in Woman seated on the edge of the bath is reminiscent of Ingres's Bather of 1808, the line of the master is not dominant, but now fused instead with glowing colour.

In the 1890s Degas began to experiment more boldly with larger, more heavily-limbed nudes whose strongly outlined forms fill almost the entire pictorial space. They are women whose bodies may not conform with classical ideals, but belong nevertheless to a real time and place. 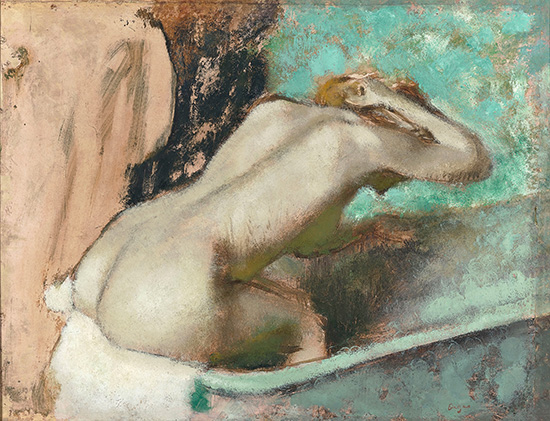 Writing in his Degas Danse Dessin of the regular Friday dinners held by the family of Degas's great friend Henri Rouart, Paul Valéry reported: 'Degas would be the soul of the evening; a constant, brilliant, unbearable guest, spreading wit, terror and gaiety.' The present exhibition allows us to perceive a little of Degas's all-round genius, as draftsman, painter, sculptor, engraver, printer, photographer. Do not miss it.

The beautifully illustrated catalogue to the exhibition is written by Henri Loyrette, with an essay on the life of Degas by Ted Gott and chronology by Sophie Matthiesson.

Degas: A new vision is at the National Gallery of Victoria from 24 June to 18 September 2016.