), written by Tom Wright, directed by Wesley Enoch, and produced by the Queensland Theatre Company, received its world première at the 2014 Sydney Festival in January. Then, the full clamour of Australia’s more than $400 million centennial commemorations of World War I was not yet audible; by the time the play reached Adelaide in March 2015 – a few weeks shy of the centenary of the doomed Allied landings at Gallipoli – the noise was deafening. Amidst the generally bellicose reverence and formal and political conservatism of commemorative offerings from almost all of the country’s major performing arts companies, Black Diggers held in its unambiguous name the promise of a fresh perspective on a national myth whose cultural expressions, for all their economic and social investment, can seem remarkably homogenous.

As many as a thousand indigenous men joined the 1st Australian Imperial Force between 1914 and 1918. It is their stories that Black Diggers, with an epic theatre-like sweep of fifty years and something like a hundred characters, ostensibly sets out to tell through its ensemble of nine males. The multiple narratives, individualised though still occasionally indistinct, nevertheless reflect the abhorrent realities faced by many indigenous soldiers: racism at home, different treatment as POWs, white opposition to their being allowed to enlist at all (this softened as Australian casualties in Europe mounted and domestic support for the country’s involvement in the war waned). Wright, drawing on research by David Williams, deploys fascinating and funny minutiae around the attempts of indigenous boys to sign up, which frequently involved the invention of Anglo names, and lies about parentage – absurdly, ‘substantial European descent’ was a criterion for entry into the AIF.

Twenty-one-year-old Hunter Page-Lochard, in a standout performance, plays Bertie, a teenager who insists on signing up despite his mother’s vociferous objections. He survives the war, but is so traumatised that he can no longer speak. Enoch and Wright invite us, I think, to read Bertie’s silence as a metaphor for the continuing under-acknowledgment of the contribution made by indigenous diggers to the campaigns in Gallipoli, Palestine, and Flanders. But such acknowledgment, however laudable, leaves untouched a greater injustice: that, after the war, Aboriginal servicemen faced the same prejudice and second-class citizenship that had been their lot before going off to fight on behalf of an empire that had stolen their land and murdered their ancestors. So too, substantially, does Black Diggers. 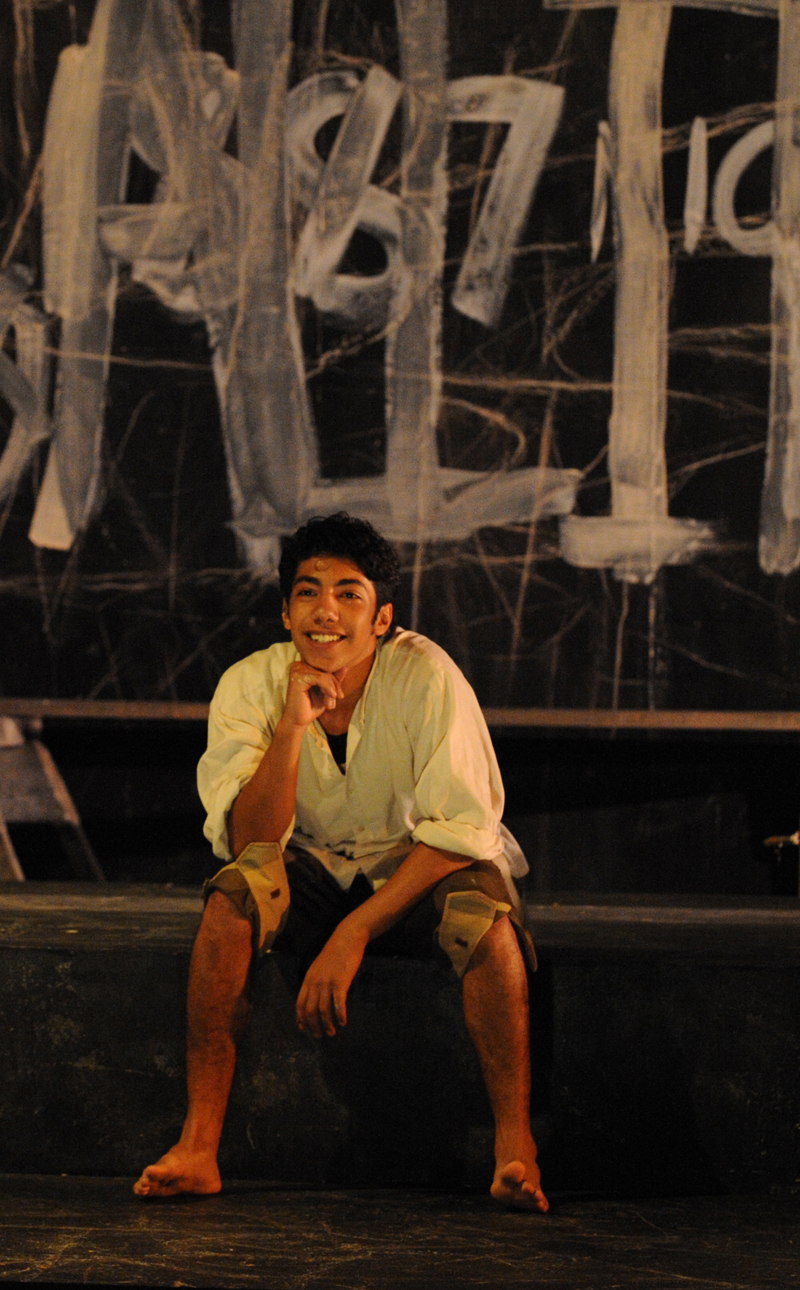 The wartime vignettes that make up the play’s middle section and incorporate all the familiar tropes of war – the hardships of life in the trenches, the gallows humour and grim camaraderie, the brutal hand-to-hand combat – merely affirm an uncontested fact, one that can all too comfortably be absorbed into the war’s extant narrative: that Aboriginal soldiers on the frontlines faced the same horrors, and were broadly accorded the same rights, as their white counterparts.

Wright has said that he wanted to take these tropes and ‘just put black faces into [them]’, but this is precisely the problem: that Black Diggers, by focusing for too long on more or less interchangeable lived experiences of the war, leaves too late, and ultimately says too little about, the critical point of difference between white and black diggers. Many of the latter returned from a war fought under the flag of democracy to a country that continued to institutionalise their oppression and lack of rights. Not only could returned indigenous servicemen still not vote, they were denied postwar entitlements, and many discovered that money they had sent home from the front for their families had been stolen or that their family land had been appropriated for the use of white veterans.

‘‘‘substantial European descent’’ was a criterion for entry into the AIF’

To be fair, Black Diggers does assay these issues – and with commendable power and poignancy – but I could not shake the feeling, as a bugler played the Last Post at the play’s conclusion, that increased recognition of indigenous soldiers in World War I, while in itself an important corrective to the war’s predominately Anglo-Australian mythology, runs the risk of absolving, and even embracing, the very architecture of their vast betrayal.

The brass band has been a staple of the cultural life of communities throughout the Commonwealth since the nineteenth-century. In Rotunda (

), the New Zealand Dance Company draws on this historic resonance in the service of its own tribute to, in the words of choreographer Shona McCullagh, the ‘good young men who were slaughtered or left traumatised by the events of often ill-planned battles during the First World War’.

The names of some of these young men – including three members of the Beanland family – adorn a vertiginous, blood red piece of silk as the work opens. It falls away to be held aloft, swirling hypnotically like that plastic bag caught on camera in American Beauty, by a circle of industrial-sized fans. A figure in khaki emerges from the darkness and entwines their body with it in a choreography that is exploratory rather than embracing, the relationship between the two, like the one that exists between cultural memory and our war dead, fraught. A sound like the revving of a gigantic engine rumbles unsettlingly through the theatre – the machinery, perhaps, of the first war to be fought in the technology age coming to (deathful) life.

The elegiac mood, however, is emphatically banished by the first brash strains of New Zealand composer Alex Lithgow’s quick march Invercargill, slickly played – as with the remainder of the work’s live repertoire, which also features new works for brass by contemporary New Zealand composers – by Kensington & Norwood Brass under the direction of Al Kidney (each performance incorporates a local brass band). Arrestingly, the twenty-four piece band begins playing while amassed at the back of the auditorium before marching down the aisles and gathering on the stage.

A complex ritual of imitation and play ensues when the male dancers – Carl Tolentino, Christopher Ofanoa, Gareth Okan and Tupua Tigafua – seize Kidney’s ceremonial baton and engage in a long game of catch. The game, along with a set piece in which the boys (for, the point is made clear, they are not yet men) flirt and caper with the female dancers – Hannah Tasker-Poland, Katie Rudd, Lucy Lynch and Chrissy Kokiri – who evoke, in their red dresses with black waistbands, the Flanders Poppy adopted in 1921 as the War’s official memorial flower. I thought of Philip Larkin’s MCMXIV: ‘Never such innocence again.’ 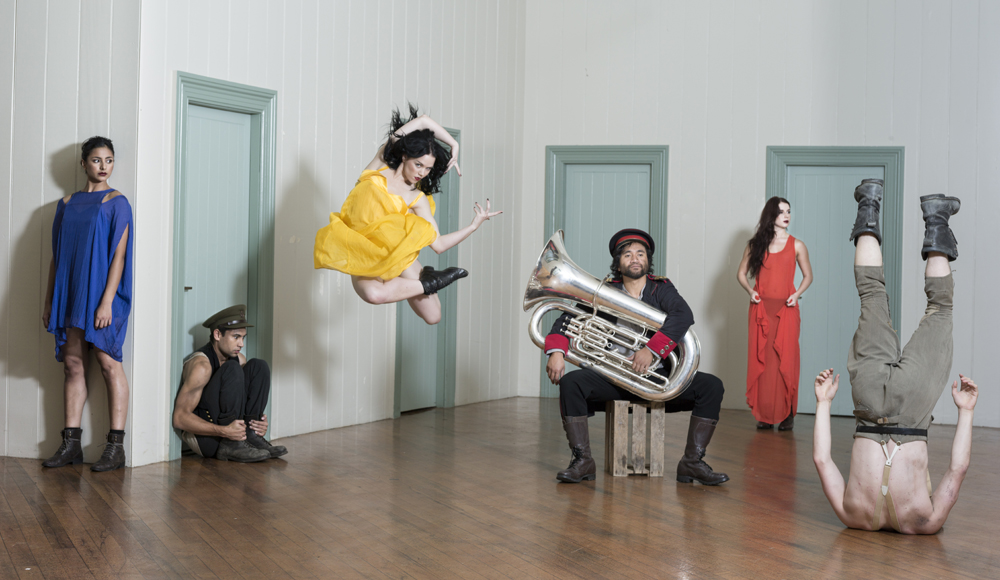 And so it proves, these early flashes of light swamped by the increasing darkness of scenes – internally, if not exactly in a holistic sense, cohesive – dealing with the death of a comrade who cannot, despite all attempts, be brought back from the dead. The stupefying chaos and ruination of the Western Front are reflected in a stunning vignette in which multiple silk screens are lit from behind by a swinging lantern that casts onto them the grotesque silhouettes of writhing bodies, a vision of Goyaesque hellishness accompanied by an aural assault of artillery fire.

Outside of such wholly memorable moments, Rotunda can feel like a work that slightly underachieves, constrained by a fairly narrow – if muscularly and dynamically realised – vocabulary of movement, and compartmentalised in a way that makes consistent engagement difficult. I also think the gendered nature of much of the choreography is problematic, the dancing of the women generally more formalist and less vivid than that of the men. In contrast to Black Diggers’s effusive conclusion, Rotunda’s is curiously indistinct, leaving not so much a bad taste in the mouth as no taste at all.

For the most part, however, it is a vibrant and finely balanced work. McCullagh and dramaturg Michelanne Forster hold the Anzac myth’s shibboleths at a distance that allows the war’s human dimension to shine through. Don McGlashan’s waiata-inflected musical direction reminds us of the cultural diversity of the nearly 3,000 New Zealand men killed at Gallipoli. The players of Kensington and Norwood Brass, aided by percussionist Cameron Lee, whose intense, martial snare work is a highlight, ably and energetically sustain Rotunda even as its fragmentary nature threatens to undermine it.