Tunnerminnerwait and Maulboyheenner were brought to Melbourne in 1839 by the protector of Aborigines, George Robinson, to 'civilise' the Victorian Aborigines. In late 1841, the two men and three women stole two guns and waged a six-week guerilla-style campaign in the Dandenongs and on the Mornington Peninsula, burning stations and killing two sealers. They were charged with murder and tried in Melbourne. Their defence counsel was Redmond Barry, who questioned the legal basis of British authority over Aborigines. Thirty-nine years later, Barry would sentence Ned Kelly to hang. Tunnerminnerwait and Maulboyheenner were the first men to be hung in Melbourne.

Some distance from the great white shrine,
city goers appear blindsided by cephalagia,
fingers delicately cradling handsets to crania.
The fighters, Tunnerminnerwait and Maulboyheenner,
only differentiate this from grief or sickness
when thousands thread the city streets,
making and remaking identical Goyaesque gestures
as wrenched vocabularies of laughter, loss and symbol.

You are no slouch; you became like them long ago,
having moved here voluntarily after the great fires ceased.
You have forgotten to draw the Dandenongs' petrol blue
haze about your shoulders; your feeble memory
of fired country, gone. Thus you link in and disappear,
cradling your burning white head just like the others,
as if it were a precious thing to be carried to market.

The settler streets are new but always ancient, in the way
of being crowded with users, usurpers, lovers of usury.
High above the city, the gull's red eye reads the city
as a gridded history painting. Real scale outdoes the Great Masters
but not the dreams of the fighters, returned from the dead,
an army of fear: Peevay, Napolean, Jack of Cape Grim, Tunninerpareway,
Robert Smallboy, Jemmy, Timmy, Tinney Jimmy, Robert of Ben Lomond, Bob;
strong-armed, yet not yet ready to lift
their own monuments into place.

But when Tunnerminnerwait and Maulboyheenner return,
swooping down without warning on borrowed grain-fed Pegasus,
they too are caught unawares by asphalt kerbs and curtain walls,
by the stale air, the absence of a river once known
and forded with great losses on both sides.
For a moment the famed warriors are nonplussed;
the source has been built in and built over.
The burning stations and Mornington rides
rate no plaque in the victor's museum,
the tired white pamphlets – bloodless, blank.

Slowing to a canter on a stolen horse is to admit defeat.
And so, hooves clacking fortissimo possibile,
they raise their guns the old way
to glass and steel, briefcase and brolly.
The makers of this hooved ordinance,
deaf to the mobile pleadings of women,
to the white kerb of history,
are swift to recognise the indivisibility of old and new,
the cringing mouths and eyes of European
history paintings they have heard about but never seen.
And then they see you, hands lifted,
cradling your burning head en tableau.
They have come for you, to burn down
your great white shrine and take you home. 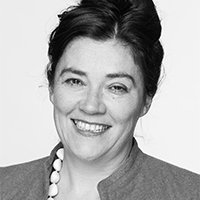