Within the Australian context, any allusion to King Roger would be taken by most to be an admiring soubriquet for the Swiss tennis maestro who, as it happens, won through to the quarter finals of the Australian Open while this review was being written. But while Melbourne is in thrall to the silky skills of the re-energised Federer, the opera-going denizens of Sydney have been thrilled by another royal Roger this week. The advertised appearance of Jonas Kaufmann in Parsifal might have been Opera Australia’s biggest coup in the way of performers for 2017, but cognoscenti were just as delighted that Karol Szymanowski’s opera, Król [i.e. King] Roger, would finally have its Australian première. Given that it was first launched into the world in Warsaw in 1926, no one could call its arrival here premature. But better ninety years late than never.

The story, co-written by the composer (1882–1937) and his cousin, the poet Jarosław Iwaszkiewicz, uses core ideas from The Bacchae by Euripides, and adapts them to twelfth-century Sicily. From the ancient Greek tragedy comes the idea of Dionysus as protagonist, seducing a monarch onto a new, less trammelled spiritual path. In its new context, this becomes a struggle between the dominant Byzantine Christianity and a liberated, hedonistic paganism preached by the Shepherd (a human disguise for Dionysus). During the composition, Szymanowski revised the ending so that Roger, although profoundly changed by his encounter with the Shepherd, ultimately opts for an independent third way. In the words of the musicologist Jim Samson, this decision makes Roger ‘a powerful symbol of modern Nietzschean man’.

The dramatic focus was thus shifted from the Shepherd to Roger, which explains why the earlier plan of calling the work Pasterz (The Shepherd) also changed. This isn’t unprecedented: other famous instances include the Ring cycle (where Wagner’s initial idea of two Siegfried dramas was supplanted by the far more interesting character development of Wotan and Brünnhilde), and Der Rosenkavalier (initially the working title was Ochs, but Strauss and Hofmannsthal came to see the Marschallin as the true dramatic focus).

Like several other OA shows in recent years (including Eugene Onegin and the current Cavalleria rusticana/Pagliacci double bill), King Roger was a co-production with the Royal Opera House, Covent Garden. Kasper Holten, Director of Opera at the latter institution, took on the direction of Szymanowski’s opera. He is quoted in the program book as having purposely disregarded the original setting in favour of a representation that explores the composer’s own psycho-drama through the titular protagonist. Hence no Byzantine churches, realistic palace courtyards, or ruined theatres, the original settings of the three acts. Instead, a curved backwall with rows of arch-shaped apertures is present throughout, suggestive of opera boxes or amphitheatre openings. The costumes were also updated to the early twentieth century. 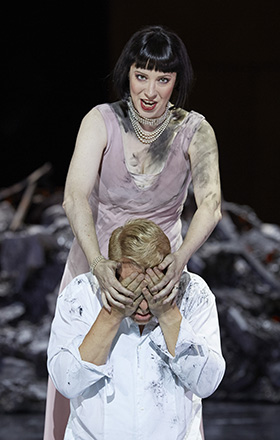 The production will chiefly be remembered for the massive head created by set designer Steffen Aarfing, which dominates the stage in Acts I and II. Projected onto this are the clever lighting and video designs of Jon Clark and Luke Halls, suggestive of ever-changing patina of the King’s internal thoughts and feelings. In a brilliant twist, Act II takes places in the rotated King’s head itself, on a series of gantries and stairs. The sensual impulses within the King are represented by masked semi-naked dancers writhing and gyrating in the basement level, until they go out of control at the end of the act and start hurling the contents of the library down. In Act III, the head is projected onto a front scrim initially, before this rises to reveal a smouldering pyre where the physical head once had been. The message is clear: Roger’s original identity has been destroyed.

The problems associated with the Shepherd’s utopia are made clear when his possessed crowd of followers hurl books onto the flames, an enacted denial of knowledge in favour of emotion that feels all-too relevant to our post-truth world. All who fall under his spell – dancers, Roxana, and eventually Roger – are stained with ash. This fire is as much destructive as it is invigorating. One might be reminded of Donna Tartt’s novel The Secret History, where college students who give themselves over to the Dionysian also end up destroyed.

Szymanowski’s score is a marvel of inventive textures and sensuous beauties, and the OA orchestra revelled in it. Andrea Mollino moulded sounds sensitively; there were only a couple of moments where the singers were at all occluded. The easily swayed crowd are crucial protagonists in their own right, initially manhandling the heretical Shepherd, but by the end having become his maenadic followers. The OA chorus was in fine fettle, whether chanting the orthodox liturgy, or throwing themselves into the fray, and those entrusted with short solos hit the mark. The chorus was supplemented by the unseen Sydney Children’s Choir in some scenes, and these young singers managed the tricky lines with commendable, if not quite perfect, accuracy. The old order was represented in the figures of the Archbishop, a bluff Gennadi Dubinsky, and a rabble-rousing, venomous Deaconess played by the excellent Dominica Matthews.

In the title role, Michael Honeyman gave a powerful performance as a monarch who sees his wife fall for the stranger and his subjects desert him. His ecstatic final monologue was beautifully delivered, leaving a lasting impression (as did the blinding light shone directly at the audience for the last few seconds). The role of Edrisi is a somewhat curious one: in this production he came across as nothing more than a confidential servant of the King, although Szymanowski specified that he was an Arabian sage, who ‘might be viewed as a symbol of wisdom or rationality’, as Samson puts it. James Egglestone shaped him sympathetically, his easy tenor voice carrying without fuss or stress.

Lorina Gore may have looked like a postwar flapper with her heavy fringe, but her voice exuded an orientalist languor entirely appropriate to the role. Her Act II vocalise, which unfurls and caresses above the stave, was particularly delicious. (Georgia Jarman sings Roxana’s Song in Holten’s production for the Royal Opera in 2015)

The only ‘import’ among the cast was the outstanding Saimir Pirgu, who had the looks and the charisma to represent the Shepherd without requiring the usual suspension of disbelief from the viewers. He had an impressive tonal range, now floating top notes, now delivering them in full stentorian voice. 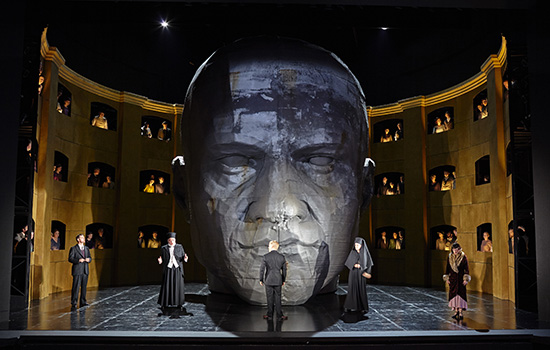 Taken as a whole, this was a brilliant conception of a fascinating work, performed magnificently. It is a short opera (no bad thing in itself), and the decision to have only one interval before the twenty-five-minute final act was questionable. Two shorter intervals would be dramatically apposite but might be logistically problematic. A case could also be made for running straight through without breaks, since the full opera lasts rather less than ninety minutes. Would patrons feel short-changed in such circumstances? Should it be coupled with another short work (as are Cav/Pag), and if so, which one? Questions like these should be pondered by the OA directorial team on a future occasion, if (as I hope) there is one. Although the publicity for this production advertised it as a ‘once-in-a-lifetime opportunity to hear a 20th-century Polish masterpiece’, it clearly merits more than a single outing. Federer shouldn't be the only King Roger to enjoy multiple triumphs on Australian soil.