As with London buses, one waits for ages for a film based on the life of that vocal phenomenon Florence Foster Jenkins (1868–1944), and then two arrive simultaneously. Add to the mix Maggie Smith's Miss Shepherd in The Lady in the Van and it seems to be open season on eccentric ladies of a certain age with thwarted musical ambitions.

Florence Foster Jenkins, who favoured Mme Jenkins or even sometimes Lady Florence, was born into a prominent, wealthy Pennsylvania family. Eloping at a young age, she entered into a brief, disastrous marriage with a ne'er-do-well who, it seems, infected her with syphilis, which may account for her increasingly outlandish behavior. She abandoned her husband and eventually ended up in New York where she became a stalwart of several of the many women's clubs that were so much a part of the metropolis's social world. She produced and staged abridged opera productions and eventually founded her own club, which she named after Verdi.

Jenkins was assisted in her productions by a good-looking, unsuccessful British actor of vaguely noble pretensions, St. Clair Bayfield, whom she supported financially while he acted as dogsbody and enabler, and who became her common-law husband. Florence had dabbled in singing earlier in her life. Encouraged by the praise she was receiving for her efforts, she decided to start performing herself. To say that she was not naturally gifted as a singer is something of an understatement. Since she also liked to perform in costume, the aural and visual effect must have been stunning. Word got out, and her annual semi-private recitals at the Ritz-Carlton were eagerly awaited. Finally, she decided it was time to share her gifts with the general public and she booked Carnegie Hall. The house was sold out within days and scalpers made a fortune. It seems she was unaware of the audience's reaction and took the riotous applause and cries of Brava seriously. It was only when she read the reviews that the truth dawned. She died shortly after of a heart attack, which may have been brought on by her disappointment. She left behind a group of recordings which have never been out of circulation.

The French film Marguerite is very loosely based on Florence Foster Jenkins's story. The protagonist, Marguerite Dumont (a self-conscious reference to A Night at the Opera), is the wealthy, neglected wife of a French nobleman. She presents musical recitals in their château in which she takes the starring role and duly murders a few operatic arias. The recital that opens the film is crashed by a supercilious young journalist who writes a tongue-in-cheek review which Marguerite takes seriously; it emboldens her to sing in public. In a wonderful scene, Marguerite commits dadaesque mayhem with La Marseillaise and, with the reluctant assistance of a clapped-out tenor who has been blackmailed into coaching her, prepares to take Paris by storm. 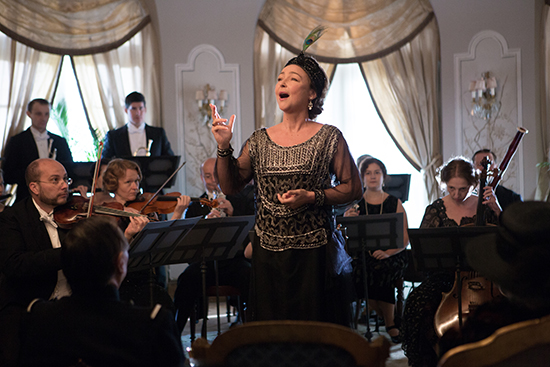 In the hands of the great Catherine Frot, who won a César for her performance, Marguerite is a mixture of vulnerability, vitality, and determination. Gradually, the people around her – the tenor, his assistants, the young journalist, even her husband, all of whom planned to take advantage of her – fall under her spell. Frot is ably supported by a uniformly excellent cast. The film is a delight until it reaches the Paris concert, at which point the director, Xavier Giannoli, loses his way. In the last fifteen minutes, Marguerite completely falls apart. But Frot's endearing performance makes it worthwhile.

Giannoli and Frot manage the balancing act on the whole, but Stephen Frears, in his biopic Florence Foster Jenkins, is so anxious for us to empathise with his heroine that he tilts the film towards sentimentality. Much emphasis is laid on Florence's infirmities caused by the syphilis, and it is suggested that a love of music in general and not an egomaniacal belief in her own abilities actually motivates her. In the final scenes, where Hugh Grant's Bayfield tends the dying, shattered diva, the mawkish levels are high. By the time we see a soft-focused Meryl Streep, wearing Florence's famous angel wings and carolling away beautifully, the film is drowning in treacle.

Streep still manages some glorious moments. The scene in which she is coached by one of the Metropolitan Opera's conductors should bring tears of joy to all students of voice. Hugh Grant makes a splendid Bayfield, racing between patron–wife and mistress and desperately trying to keep the show on the road. The speech in which he extols the virtues of admitting to one's artistic limitations strikes a deeper note than the rest of the film and is a theme that could have usefully been developed. 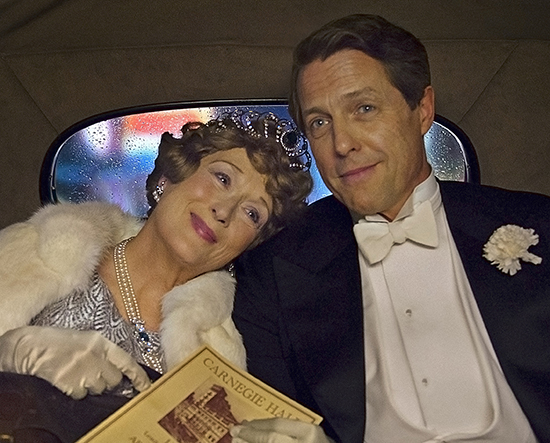 Fine though both Streep and Grant are, the film belongs to Simon Helberg as Florence's bemused accompanist, Cosme McMoon. The film's highlight is the scene in which McMoon first accompanies Florence. Helberg's reactions as McMoon realises what he has got himself into are worth the price of admission.

Florence Foster Jenkins (PG-13), directed by Stephen Frears, distributed in Australia by Entertainment One . In cinemas May 5.