As I took my seat at the Heath Ledger Theatre in Perth for the Australian première of Hannie Rayson’s latest play, Extinction, I was struck by a sense of irony. Here we are, ready to feel enraged, ashamed, and then empowered about climate change and species loss by the production of a theatre company named after a threatened species (the black swan) whose principal sponsor is one of the biggest mining companies in the world. This is not a criticism, simply an observation about the economy of doing good. As Peter Singer would say, what’s the most good you can do with your resources? Spend $40,000 dollars on a dog for the blind, or spend the same amount on curing thousands of partially blind people in a developing country? The source of the money, and indeed the very practice of economic rationalism, is murky territory for idealists. The controversial sponsorship of the upcoming Paris climate change talks by fossil fuel companies is a case in point.

This state of active contemplation, the involuntary forging of associations between the theme of the play and the goings on of the world, is an indication of the power of Rayson’s work. She writes plays that make people chew the fat; her work both distils and engages in the national conversation. This project is evidenced in her oeuvre, which has delved into such subjects as the asylum seeker debate (Two Brothers, 2005), Australia’s patchy multiculturalism (Mary, 1981), cultural cringe (Hotel Sorrento, 1990), gender relations (Room to Move, 1985), and land ownership and racism (Inheritance, 2003). These are not, however, ‘issue plays’, a charge often levelled at Rayson. Issue plays tend to adopt a particular ideological posture and proselytise. Rayson’s plays, by contrast, assemble casts of characters whose perspectives on such topics are undercut by the realities of being human. Her characters remind us that the political is always personal as the political remains within the realm of human endeavour, striving, and stumbling in turn. As Harry Jewell, the mining magnate (played by Matt Dyktynski), says, ‘Life is messy.’ 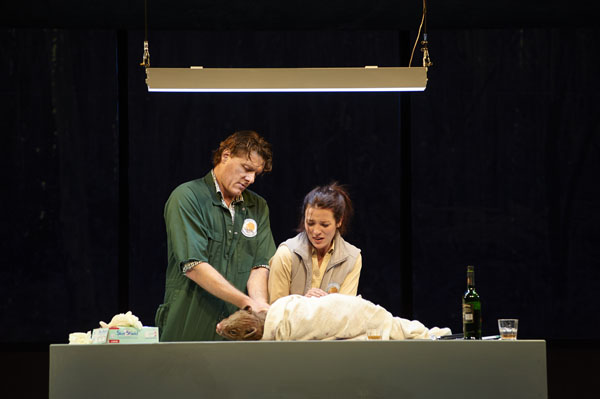 ‘As Peter Singer would say, what’s the most good you can do with your resources?’

Extinction charts parallel narratives of survival undertaken by four characters – a zoologist, vet, mining executive, and ecologist – all of which revolve around a plight to save the endangered tiger quoll. The quoll, native to Victoria, stands in for the many mammals that have become extinct or are endangered in Australia. The manner in which the national and domestic narratives unfold between the characters echoes the rapid unravelling of the ecosystem around them. To paraphrase zoologist Piper Ross (Hannah Day), millions of relationships hinge on the existence of the tiger quoll. It is a reminder that we humans are not exempt from the effects of a dysfunctional ecology. The march of death that gathers momentum and emotional intensity in the second act propels us towards a precipice that lies beyond the conclusion of the play. This is not to dismiss Extinction as a glum affair with apocalyptic undertones – quite the opposite. Rayson balances the play with her characteristic wit and tight dialogue; in an interview she has admitted to having to ‘cut out some of the gags’ which were too funny for the subject. 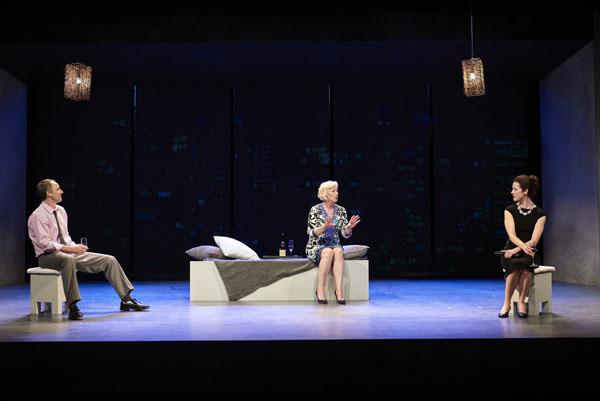 This realisation of Extinction by Black Swan embraces the dexterity of the script while staying true to its realism. Special mention must go to set and costume designer Bryan Woltjen, whose minimalist construction captured the theme of the piece in almost a single, shifting understatement. For the most part, a set of ashen panels and an island block resembled both the interior of a veterinary clinic and a modern city apartment while also suggesting the shape of the human imprint upon the earth: pale and silent. The talk of wilderness was juxtaposed with a sparse backdrop, which was complemented by Trent Suidgeest’s lighting design. Between scenes, the actors slid across the stage in silhouette against azure or nectarine colour projections reminiscent of twilight or dawn. Is this the twilight of the earth, it asks, or the dawn of real action, of hope?

‘She writes plays that make people chew the fat; her work both distils and engages in the national conversation’

Sarah McNeill, as conservation director Heather Dixon-Brown, provided the standout performance. She skilfully embodied the conflicted professor who must operate within frameworks at odds with the good work she intends. Jaded, fiercely intelligent, McNeill’s Heather possessed the defensiveness of an authoritative person who knows she is correct and morally compromised at the same time. McNeill was well supported by Matt Dyktynski, who played the charismatic mining executive with verve. Dyktynski scaled the lengths of larrikin, charmer, and hardnosed CEO with ease. Overall, the performances were convincing.

The strength of Rayson’s work emerges from her understanding of the interrconnectedness of all things. Extinction, like all of Rayson’s plays, doesn’t ram a message down the throats of its audience, but rather barracks for theatre’s ability to provoke creative thinking and inspire change. For those wishing to renew their sense of purpose, for whatever cause, this is the play for you.