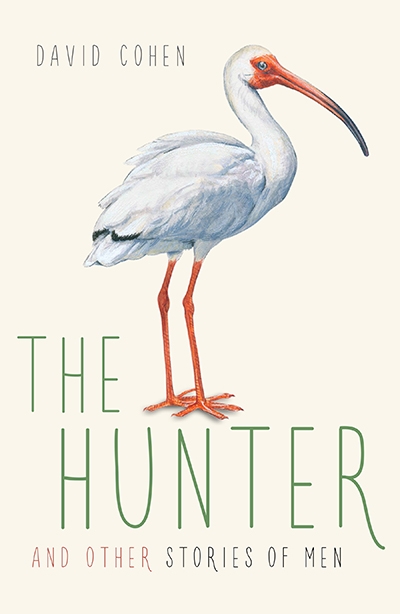 The Hunter and Other Stories of Men

In David Cohen’s collection of wry and quirky stories, he follows the lives of various men in their rituals of ordinariness – their failures, foibles, and fetishes – with a razor-like eye observing the disenchantments of modernity.

The titular story, ‘The Hunter’, opens onto a wasteland of urban gothic, where economic imperatives rub up against the environment. The grubbiness of capitalism is localised in a development site in an unnamed city, home to an endangered ibis population. As protestors gather to decry the removal of these once-sacred birds, the anonymous narrator–developer explains his determination to proceed: ‘We recoil at the sight of their accordion necks. We are repelled by their black torn-stocking heads.’ This coolly detached narrative voice gathers sinister force as the story moves  briskly with the logic of rapacious consumption. Cohen’s tone is perfectly measured in clipped phrasing, the economical clauses mimicking the precision of poetry. This is the diffident voice of the alienated everyman, a voice that, with little exception,  persists throughout the entirety of this collection. The sacrificial fate of the site manager is brutally ironic, an allegory of our failure to recognise our own vulture-like relationship to the environment and each other.

The other stories in this book do not quite match the tension of the first, but Cohen’s tragi-comic sensibility creates some astonishing moments of what we might  think of as the suburban surreal: a recently divorced man’s transposed desires culminates in an erotic fixation with a Hills Hoist in ‘Washing Day’; while in ‘The Woodsmen’, a man becomes disturbingly fond of a chainsaw. Men are unravelled here by their engagement with seemingly banal objects: an electric saw, a screwdriver, a woman’s bra. ‘Although these men lived together,’ says one of Cohen’s characters, ‘their lives  never actually intersected.’ This is a summation of the lives of these strangely ordinary men, and Cohen lucidly highlights the bizarre underside of the real.

Sophie Frazer has a PhD in English from the University of Sydney, where she teaches Victorian literature.

The Hunter and Other Stories of Men

Sophie Frazer has a PhD in English from the University of Sydney, where she teaches Victorian literature.