Getting Away with Murder by Duncan McNab

The rash of unsolved murders of gay men along the Sydney coastline during the 1980s and early 1990s has been in the news again. In 2013, Australian Story ran a feature on the quest of American Steve Johnson to have the coronial ruling of suicide overturned for his younger brother Scott, who died at North Head in 1988. Lateline followed up with a controversial interview with Detective Chief Inspector Pamela Young of the Unsolved Homicide Unit, who had been tasked to re-investigate Johnson’s death. Young was smartly removed from the investigation after intimating that Steve Johnson had exerted political pressure to have his brother’s case prioritised, a suggestion Johnson and the New South Wales Police Minister flatly rejected. Late last year, to considerable fanfare, SBS screened a four-part drama series, Deep Water: The real story, a companion documentary and online investigation into the murders of gay men around Bondi Beach and the eastern suburbs. (Addendum: on 30 January, the New York Times published an article entitled 'When gangs killed gay men for sport: Australia reviews 88 deaths'.)

You can see why this is a topical subject: murder, sex, mystery (the trifecta of the true-crime genre). Duncan McNab’s Getting Away With Murder is not the first book to cover these murders – journalist Greg Callaghan’s Bondi Badlands: The definitive story of Sydney’s gay hate murders (2007) traversed similar territory – but what distinguishes this book is McNab’s former life as a Sydney police detective, and one with a good working knowledge of Sydney gay subculture. From a law-enforcement perspective, this is an insider’s account into a lamentable aspect of Sydney policing. Too often, as McNab chronicles, the murders of gay men were lazily investigated and summarily dismissed by the police as suicide. This enabled groups of young thugs to roam the cliffs and parks of Sydney beaches with impunity, bashing gay men, which McNab mordantly describes as ‘the team sport of the eighties’. Moreover, as McNab sorrowfully reveals, there may well have been occasions when the gay bashers were themselves police. 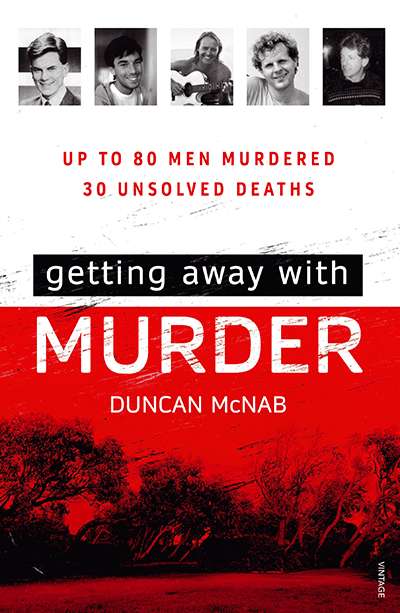