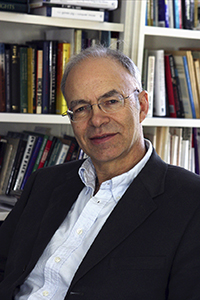 Because I have something to say – and not just to one person, but to as many people as I can reach. And when the writing goes well, I enjoy doing it.

Where? I’m happy when I’ve done something well, whether it’s writing, giving a talk, or organising an event. There is no particular place where that occurs. If you want particular places, it would have to be a different kind of happiness, such as I might feel on a mountaintop, looking out at the view, or at the beach, catching a wave.

I dislike the way people use ‘inappropriate’ in order to pretend that they are not making a moral judgements. I’d like to see ‘uninterested’ back in public usage, because that would mean that people were no longer misusing ‘disinterested’.

I regret that there are fewer book reviews in daily newspapers.

I’m delighted that writers’ festivals are thriving in Australia. It’s a great way of connecting with your audience and meeting other writers.

Some are, some aren’t – and some don’t deserve to be anyway.

I’m in the midst of a busy teaching semester at Princeton. That doesn’t leave a lot of time for writing anything long. I’m still writing my monthly columns for Project Syndicate, many of which have now been published in Ethics in the Real World.

Peter Singer is Ira W. DeCamp Professor of Bioethics, Princeton University, and Laureate Professor, School of Historical and Philosophical Studies, University of Melbourne. He is the author of more than twenty books, including The Life You Can Save (2009) and The Most Good You Can Do (2015) and Ethics in the Real World (2016).