I recently went back to New England. It is a long drive from Melbourne, but as I passed through Coonabarabran and Tamworth and began the ascent up the Moonbi Ranges, my gaze responded to the strange and familiar landscape. I periodically wound down the car window to smell the air – crisp but still warm for autumn. I grew up in a few different New England towns – Inverell, Glen Innes, Armidale – so I am familiar with the territory covered in the fascinating essays in High Lean Country. The high elevation of the Tableland makes the winters cold, summers mild. The dramatic landscape is dotted with granite mounds and monoliths. It is edged to the east by the escarpment and the gorge country of Judith Wright’s poems.

High Lean Country is an unusual regional history. Its contributors include historians, literary scholars, archaeologists, geographers, geomorphologists, botanists, educators, dramatists and visual artists. It is accessible and expresses a preference for the place, while maintaining the rigorous scholarly standards of an academic publication. Many of the contributors, though based at the University of New England, are not originally from the region, and it is the tension between these elements that gives High Lean Country a strong poetic sensibility, steering it clear of parochialism. 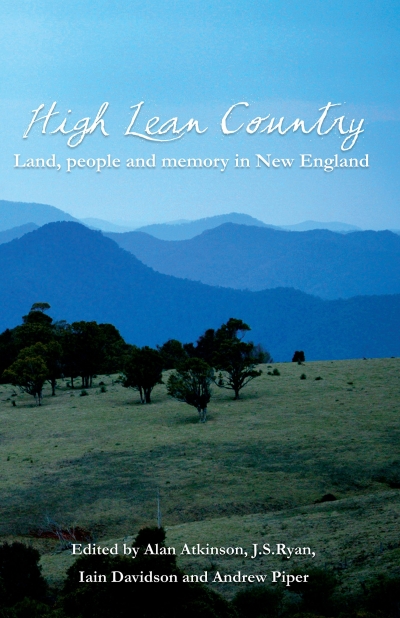