Like a teacup in a snowstorm I
Find you and break you. A sentry reptile, I advise you
To return quietly to the campfire. You mistakenly took
My interest in theology for a strategy

Flip to a towel, flip to
Sheets of pasta in an emu's stomach. Sheep merely fluffing the
Horizon

Technology is increasingly feminine. The diction of
Saying so. I come back: your tears are testament to being
Wanted, blessed. The tail goes into the
Water, I ahead of it. Circumstances
Were against my addiction. The flattening out of smaller people by
Bigger people, ringing them up late at night with a bigger
Need

Don't blame me for being three
Years old. I have pain, I have chunks of weather as
Big as England. Hell creeps up, cool centimetres. There is a
Family travelling by boat from Corsica to
Delphi, the boat weighed down with questions. The children are saying
'Where is the bluest sea, we need to know, where are
The best fish?' Old wrecks strain for attention like buried religion

The man and the woman speak in
Different terms using the same words. It's a play and generates
Tension and emotion in the other characters. We can see it
From the ship. On the ship
Sheep, one in a bonnet. To escape matrimony, to
Live in a liberal culture such as Tel Aviv where spies only
Go for holidays. Selling umbrellas made
Him even more ambivalent about the rain and the cities that
They brightened, though so few were known for them, and those
Cities just as frequently darkened with
Black umbrellas that bus drivers couldn't see. They had to
Lie about that, to save the living. It's the only way
To avoid what you want. You hated
Justin Bieber like videotape and paper. From the satellite they could
See thousands of humans doing the same thing. One is
Typing on the eighth floor. Words
Blow in. Into the day, into the night, the internet itself
Just a site. A jug doesn't boil alone: a fire comes
Down from the volcano and singes
Fringes off the poor children's clothing. I wondered what you were
Doing in the bath earlier. You put your eyes in
An ice cream container. Hoarder: sometimes
The urge to self-demolish comes down the wire more
Loudly than's wanted. The pine nuts were at an all time
High, I left a feather on the
Terrace as a signal. The mongrels sighed in the lift. The
Lift redolent of Aerogard, and nappies, and burnt potato salad 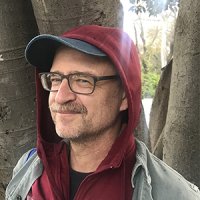