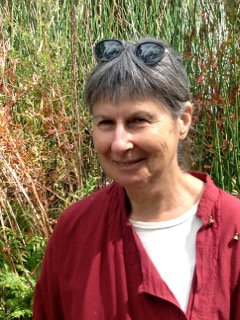 Lesley Lebkowicz has been publishing poetry since the early 1980s. Her last book, The Petrov Poems (Pitt Street Poetry), won a Canberra Critics’ Circle award, was shortlisted for the 2014 ACT Book of the Year, and won the 2014 ACT Writing and Publishing Award (Poetry). She has also published a collection of short fiction Washing my Mother’s Hair, and a translation of the earliest Buddhist verse cycle, in collaboration with Pali scholars. She has spent many years in silent retreat and founded the Canberra Insight Meditation Group. 2017 saw her first exhibition of ceramics. Another is planned for 2018 as is the publication of her next book Kvetch (Pitt Street Poetry).

'My writing inevitably reflects where I live, especially the bits of Canberra close to home. I like to walk on Black Mountain: it and the lake and the country around the town appear in individual poems. Canberra informed much of The Petrov Poems. It’s a very Canberra story, both leading up to the defections of Volodya and Evdokia Petrov, and during the Royal Commission into Espionage.

Much of my life has been involved in ascetic meditative practice but I don’t seem to be able to write directly about it. I think it informs my creative work, but it’s hard to say how, apart from an occasional reference. It’s in my ceramics as I’m drawn to the Japanese aesthetic which is influenced by Zen Buddhism, but I can’t locate as clearly in my poetry.'

The pot I imagine