Maybe I mistook the word menarche
for men-ache, watching Mum watch Heath Ledger
croon the song that she said
once lured her into marriage: ‘You’re just too good
to be tru-oooooh—’ She sighed.

I sighed, her mirror, on the motel’s
twin bed. And locked Heath’s shit-eating grin
to a sensation low in my body:
a sudden peristalsis – as if
my uterus had seen his face
and smashed some internal bottle
of cheap wine against my bow,
set sail.

So many firsts might stain
the linen of stopovers
like these. Later I find the merest blip
of ochre blood, as if the film itself
was my induction to our
family legacy: bleeding for men
who sing for forgiveness. 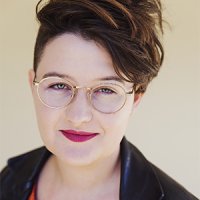 Zenobia Frost is a writer from Brisbane, Australia. Her work has appeared in Overland, Cordite, Arc (Canada), Scum, Woolf Pack, and the Hunter Anthology of Contemporary Feminist Poetry. In 2015, an ArtStart grant allowed her to study poetry in Germany at the Black Forest Writing Seminars and through digital workshops with Warsan Shire. Her first collection, Salt and Bone, was published by Walleah Press in 2014, and was shortlisted for the Thomas Shapcott Prize and Anne Elder Awards. In 2017, she was shortlisted for the inaugural Red Room Poetry Fellowship. Zenobia is a Master’s candidate at QUT, researching the poetics of transient domestic spaces in Queensland.