Upheaval: How nations cope with crisis and change by Jared Diamond

Individuals have crises; dealing with them sometimes makes a person stronger. Perhaps nation-states are similar: crises make them stronger and better. But is humanity as a whole like this? This question is raised but not answered in Jared Diamond’s Upheaval.

Diamond sees four crises facing humans: the possibility of nuclear war killing millions and bringing ‘nuclear winter’; climate change; the depletion of essential natural resources; and global inequalities of living standards. He points to ways in which the latter three problems are related. As consumption by ‘have-nots’ approaches that of the ‘haves’ (a scenario that the ideology of global development promotes, especially in India and China), the depletion of the world’s resources accelerates. ‘Each year the average American consumes about 32 times more gasoline, and produces 32 times more plastic waste and carbon dioxide, than does the average citizen of a poor country.’ Were the world’s poor to live at US rates of resource use, waste, and CO2 production, Diamond calculates that world consumption would be eleven times greater than now – as if the world population were eighty billion, an insupportable number.

It is a crisis of humanity’s self-belief that the promise of ‘global development’, construed this way, is ‘a cruel hoax’. Diamond writes that humanity could act collectively to ensure that national average rates of consumption converge towards a sustainable global average; this would be higher than the current consumption of the have-nots and lower than what we in the First World (about a billion of the seven and a half billion humans now alive) currently enjoy.

Tim Rowse holds honorary positions at Western Sydney University and the Australian National University His books include Indigenous and Other Australians Since 1901 (UNSW Press, 2017) and (co-edited with Lawrence Bamblett and Fred Myers) The Difference Identity <akes (Aboriginal Studies Press, 2019). 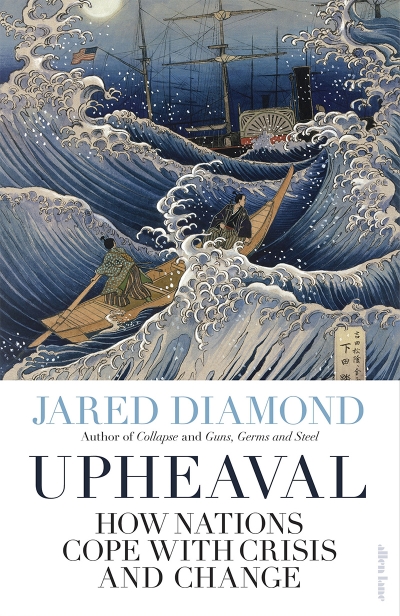 Upheaval: How nations cope with crisis and change