What charming company she is, Anna Cowen – warm, energetic, amusing, enthusiastic. And what a job that must have been: partnering Zelman Cowen when Prime Minister Malcolm Fraser appointed him governor-general of Australia in 1977. John Kerr, Cowen’s predecessor, had called the very existence of the office of governor-general into disrepute in 1975 when he sacked Prime Minister Gough Whitlam; Kerr was loathed by Labor supporters. The Cowens, unaligned politically, were a good choice. ‘Healing’ was the word that they chose as their mission for their five years in Government House.

Anna, usually called Anne, was fifty-two, a mother of four, when they moved to Yarralumla. When the press asked her what it would all mean for her, she pictured a governor-general’s wife ‘with an air of authority (and perhaps a tiara) [and] a slightly distant or aloof bearing. There was no way I could do any of that – it wasn’t in my DNA. I would simply have to be myself and hope that would be acceptable.’

Later, she met predecessors – Maie Casey, writer, artist, and aviatrix (no tiaras there), and brilliant author Alexandra Hasluck, whose wardrobe had included a tiara but who assured Anne that it was no use when Paul Hasluck’s stint as governor-general was over. Being the wife of the governor-general meant being driven around in a Rolls Royce with a police escort; living at Yarralumla or at Admiralty House overlooking Sydney Harbour, where her principal responsibilities were hosting a jaw-dropping number of dinners, lunches, receptions, and eminent visitors; and, above all, being with her husband on those occasions that required them to appear as a couple. Anne’s chief anxiety was persuading people to mingle and remembering enough names to help her to mingle with them herself.

Being the wife of a ‘healing’ governor-general meant accepting a prodigious number of invitations from all over Australia. Extremely demanding this became: one day, their engagements meant spending six hours in the air; on another they had nine engagements and three flights. Sometimes they had to travel in evening dress, with decorations. Zelman ‘liked this stuff’, she noted: when he was wearing all his regalia she thought that he ‘looked like a Christmas tree’. A needlewoman, she fashioned him a ‘happy coat’ to wear on such flights so that his formal coat was not so crushed when they arrived.

Zelman insisted on writing all the necessary speeches himself. A ‘Renaissance Man’ the President of the Australian Academy of Science dubbed this constitutional lawyer. Anne, receiving invitations herself, decided that she should follow suit; she had Arts and Social Work degrees from the Universities of Melbourne and Oxford, and she was willing to work hard at preparing something apposite to say. She argued for mothers being able to accompany their children when they had to spend time in hospital. Concerned about the position of women, she congratulated Ita Buttrose on the Women’s Weekly’s path-breaking survey on women, noting her agreement with ‘women’s libbers’ after she had had to sit through a beauty contest. But even when she spoke about new roles for women in the late 1970s, she held that they should remain at home while their children were young. In conversation with Eve Mahlab, she lamented ‘impermanence in marriages’. She herself had been a young bride, married at nineteen. Throughout these years, Anne recorded concerns about her children. The youngest, Ben, lived at Yarralumla for much of the Cowens’ time there and was often troublingly alone with no one to talk to but one of the aides. The others were on their ways to careers and marriages.

From time to time, she broke the rules. She brought the whole cavalcade – Rolls and police escort – to a halt between Melbourne engagements so that she could visit her mother for four minutes. She invaded the Yarralumla kitchen to discuss with the head chef the possibility of making marmalade rather than buying jars imported from England. When she and her mother decided to show him how to make gefilte fish, they couldn’t agree on the proportions of salt and sugar.

Always, there were anxieties about the effectiveness of the post-Dismissal ‘healing’. On 23 September 1979, in Melbourne to open the Royal Show, she thought that they were ‘doubtless creating republicans right, left and centre’ when the Rolls and its escort moved out of the heavy traffic to drive along the wrong side of Flemington Road. She noted, with pleasure, conversations over dinner with Bob Hawke and Lionel Murphy, and was pleased when Fred Williams said that the Cowens had ‘set back the cause of Republicanism in this country twenty-five years’.

This was an enchanting read. I wish, though, that the usually generous and meticulous Miegunyah Press had provided more referencing and more careful proofreading for this work. I had to read several other sources to fill out the absent background of Anna Cowen’s diaries. 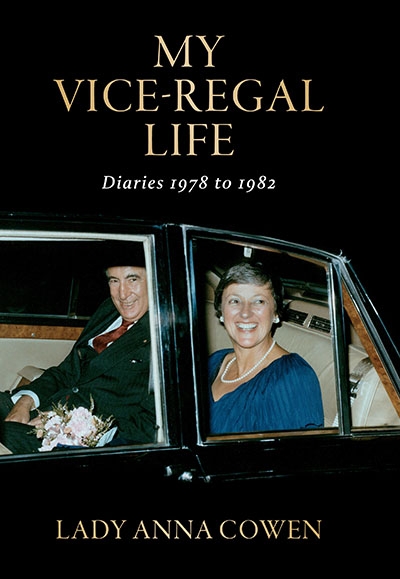