The Watchdog That Didn’t Bark: The Financial Crisis and the Disappearance of Investigative Journalism by Dean Starkman

It’s a similar curious incident in the business media that the veteran Wall Street Journal reporter Dean Starkman sets out to understand in The Watchdog That Didn’t Bark: why did all those well-paid, well-credentialled American hacks fail to recognise between 2000 and 2008 that they were crawling over a boom doomed to bust as surely as night follows day.

Starkman, now at Columbia Journalism Review, has, in essence, a simple explanation. There is a perennial tension in business writing between ‘access journalism’, that depending on information from the powerful, and ‘accountability journalism’, that involving information about the powerful. The former privileges the ‘scoop’, the latter the long-form exposé involving heavy investigative lifting.

Particularly after 2004, he argues, the former came to predominate over the latter, and this is ‘why the public had no meaningful role to play in the workings of a financial system that was doomed to fail’. This development he ascribes to various factors, but principally to the collapse of the established media-funding model, the collapse of newsroom resources and the atomisation of the news cycle.

One longs to agree with him, but there is a sense in this rather rambling and repetitive book of working towards assumed conclusions. ‘As journalists,’ says Starkman at one point, ‘we have to believe that what we do is not entirely ineffectual and that it has some effect on the outcome of events. Otherwise, why bother?’ Well, sure, but it’s not clear to me that business journalism has ever been particularly good at moderating booms. Booms are characterised by confirmation biases, in which the facts favourable to their continuation are always stressed and collected, and vice versa. In booms, investors sometimes ignore their own misgivings because the trend is frankly stronger, and ignoring the tide in sentiment means money foregone; booms exert similar pressure on journalists, who, in keeping their heads when all about them are losing theirs, can seem out of touch, off the pace, missing the point. Business journalism, furthermore, is close kindred of sports journalism, in that profit, like victory, washes all sins away.

‘ ... it’s not clear to me that business journalism has ever been particularly good at moderating booms.’

Starkman’s analysis starts with a breezy history of the American financial press, from Henry Poor to James Cramer, Clarence Barron to Maria Bartiromo. Special homage is paid to the muckrakers – the circle of Ida Tarbell, David Graham Phillips, Lincoln Steffens, Ray Stannard Baker and others who tilted at the trusts and the ‘malefactors of great wealth’ around the turn of the twentieth century. But while you can’t tell the saga of the sainted Tarbell versus mephistophelean John D. Rockefeller too often, Starkman misses the other half of the story, which are the efforts Rockefeller made to burnish his image with the help of the infamous Ivy Lee, the first guru of financial public relations – inventor, inter alia, of the press release. In fact, the Progressive Era which Starkman exalts left a legacy not just of hard-hitting journalism but of soft-soaping of public opinion, with George Creel, Edward Bernays, and Pendleton Dudley among its other pioneers.

This is an absence that marks the entire book. Perhaps he takes it for granted, but Starkman seems convinced that facts simply lie around like nuggets in the Klondike awaiting enterprising journalistic prospectors. If such are to be found, though, they will often lie secluded behind great mountains and canyons of disinformation and dissimulation. He offers no help in crossing that frontier.

Starkman then draws a direct line from the past to the present, from trusts to tranches. ‘What industrial concentration was to the muckrakers’ era, financialization is to ours,’ he says. ‘Both phenomena were equally baffling to the literate citizen. Both demanded an explanation. Both had been brewing for decades.’ It’s a falsely alluring comparison. The ‘curse of bigness’, as it was called, was a concept far more readily understood and explicable than the minutiae of a collateralised debt obligation or credit default swap. Lay readers respond incuriously to the complexity of financial instruments, even finding it faintly alluring; for that matter, so do financial markets professionals. Indeed, by far the simplest explanation for reporters not understanding the risks inherent in the system in 2000–08 is that the participants didn’t either.

Starkman seems so determined to indict his peers for neglect and complicity that he misses a much more interesting discussion, to which his own experience should have wakened him. The most engaging parts of The Watchdog concern the culture of the WSJ newsroom and its ‘poker-faced cool’. Among several telling personal anecdotes, Starkman describes being contacted by the general counsel of a packaging company, who then arrived with a couple of flaks and some important information: their employer was about to make a multi-billion-dollar bid, the details of which were available if the paper promised to ‘play it big’.

The promise was eagerly made, and Starkman was euphoric at his ‘scoop’: ‘I grinned until my face hurt … The whole thing felt positively naughty. And unlike a successful investigative story, with its grand juries, arrests and impeachments, here all was good. No one was going to jail. No one’s life was ruined. The opposite was the case. The buyer got its deal; the seller got paid; the bankers got paid; the other bankers got paid; the layers got paid; the PR firms got paid etc etc. And I got my scoop, clean as a whistle.’

The point is that not only is access journalism more immediately useful to the investors who chiefly comprise the audience of the business media, and not only is it more straightforwardly mass-produced by well-drilled newsrooms, it is also more fun – more instantly gratifying, more openly optimistic, more impressive to peers. And business is a glass-half-full kind of place. The two most famous analysts on Wall Street during the stagflationary 1970s were Henry Kaufman of Salomon Brothers and Al Wojnilower of Credit Suisse, the tenor of whose advice can be deduced from their respective epithets, ‘Doctor Doom’ and ‘Doctor Death’. They were not terms of endearment, and the market rather enjoyed seeing their prophecies for the 1980s coming to nought. Basically, nobody likes a party pooper. Had she turned up during the subprime boom, Cassandra would have been stopped at the security desk.

This is not to dismiss the phenomena Starkman lays out in his concluding chapters about media upheaval, churnalism, aggregation, and the reality that ‘what appears to be an increasingly lively and abundant new environment actually rests on … a shrinking fact-gathering infrastructure’. But Starkman is a classic journalist in that he has constructed his headline and worked backwards from it. He underestimates how his colleagues themselves grew invested in the boom, and do in every boom, because of a perception of themselves as players and a desire to conform. The telling clue Holmes adduces from the non-barking watchdog in ‘Silver Blaze’ is that the thief was part of the horse’s circle, and was thus identified as a friend. I’m not sure the same did not apply in financial journalism between 2000 and 2008. 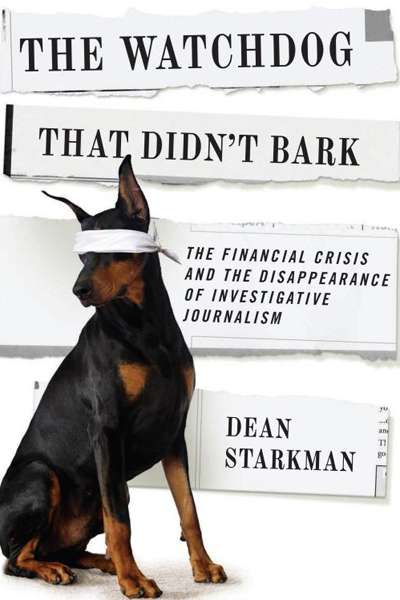