Too often the suburbia on show in American movies feels like a suburbia that only exists in the movies; a fantasy land stocked with preposterously large, catalogue-neat houses populated by families that boast perfect complexions and expensive teeth. Not so in Lady Bird, set in Sacramento, California, where the glitz of Los Angeles and the fashionability of San Francisco feel very far away. Christine ‘Lady Bird’ McPherson (Saoirse Ronan), a Catholic high school student, lives in a house that has wood-panelled walls and a cramped bathroom with a door that doesn’t lock. Exaggeratedly ashamed of it, she explores affluent neighbourhoods with her best friend, Julie (Beanie Feldstein), selecting dream homes. Her parents, overworked psychiatric nurse Marion (Laurie Metcalf) and recently sacked computer programmer Larry (Tracy Letts), are humiliated by their daughter’s shame, but Lady Bird is heedless of that.

Like many teenagers, Lady Bird (her given name, she insists, because ‘I gave it to myself’) is desperate to overhaul her life, without much notion of how to do so or what it might cost her, materially or otherwise. She meets no real antagonist on her path to self-realisation, for Lady Bird, like another recent coming-of-age film, Call Me By Your Name, is more or less about an experience of time devoid of strife, in which the greatest drama is impending adulthood, which feels, to the teenager, both agonisingly distant and threateningly close at hand. (The central characters in both films are seventeen.)

‘I wish I could live through something,’ complains Lady Bird. The film honours her excitability – and her obliviousness to the adventure of her own life – by hopping and skipping across a year-long timeframe. Several sequences are edited with comic speed; denouements happen within seconds. Lady Bird tries out one boyfriend, sweet drama club kid Danny (Lucas Hedges), and then another, aspiring bohemian Kyle (Timothée Chalamet, who played the adolescent in Call Me By Your Name), without seriously bruising her heart. Which is not to say she is unfeeling: it is just that, without her quite realising it, she has so much else going on.

First time writer–director Greta Gerwig, an experienced actor, is attuned to the mix of munificence and selfishness that makes up the adolescent heart. Lady Bird is basically a good person, but she does not always act it. She neglects Julie for a shot at chumminess with Jenna (Odeya Rush), the school’s cool, rich girl, and exasperates her adoptive older brother, Miguel (Jordan Rodrigues). If these relationships feel a little rote, cut-and-pasted from any teen movie, Lady Bird’s relationship with her mother Marion rings true. The scenes between Ronan and Metcalf are the film’s strongest, animated by a discord that can and sometimes does dissolve into tenderness. Marion is her daughter’s harshest critic and fiercest protector, and Lady Bird’s struggle to exit childhood is also her mother’s struggle to let go of that childhood. This is a wise performance from Metcalf, one that ensures that a viewer’s sympathy lies with both characters equally. 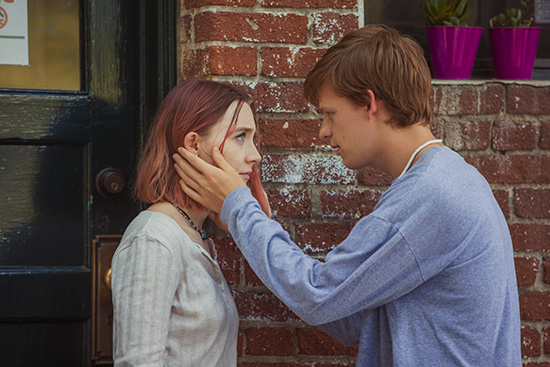 Saoirse Ronan and Lucas Hedges in Lady Bird (photograph by Merie Wallace, courtesy of A24)

Most of Lady Bird takes place during 2002, a year distant enough to feel definitively in the past, but not so far gone as to make the film into a finicky period piece. Details of the time – paranoia about terrorism, the novelty of mobile phones – are noted but not laboured, and many scenes have a golden tint that is part California sunlight, part the softening effect of memory. (Lady Bird was shot by Sam Levy, a cinematographer who has worked with Gerwig on several of her acting projects; he describes the film’s visual style, accurately, as ‘plain and luscious’.) The film’s setting and events roughly parallel Gerwig’s own life: she grew up in Sacramento and finished high school around the same time. But Lady Bird does not feel self-absorbed, even when the title character sometimes is.

Best of all is Gerwig’s close observation of class and its material truths: the slightly cramped, outmoded house; the op-shop bargains; the double shifts and dead-end employment prospects. (Miguel is a university graduate who works in a supermarket.) It isn’t exactly poverty on show here, but nor is it prosperity. It is ordinariness – an ordinariness that some viewers may find, as I did, deeply familiar and moving. There aren’t many contemporary American directors who chronicle working people like this, without descending into either caricature or sentimentality. Kelly Reichardt is one, and, though its governing mood is more affectionately comic, Lady Bird recalls Reichardt’s Wendy and Lucy (2008) in its attention to the daily rhythm and effects of financial precariousness. (Perhaps not coincidentally, Wendy and Lucy was also shot by Sam Levy.) 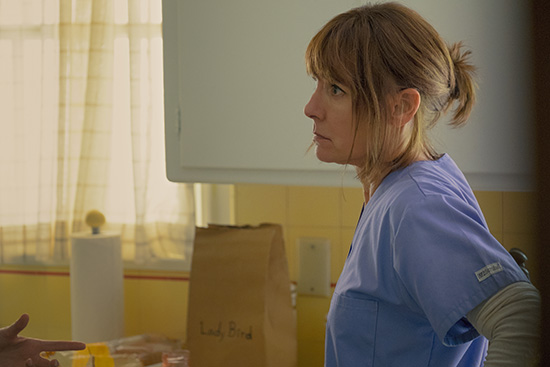 Laurie Metcalf in Lady Bird (photograph by Merrick Morton, courtesy of A24)

Lady Bird opens with an epigraph from Joan Didion: ‘Anybody who talks about California hedonism has never spent a Christmas in Sacramento.’ Didion, like Gerwig, is from Sacramento, but by the end Lady Bird feels like a rebuttal of the intellectual haughtiness that Didion has come to represent. This is because, and not in spite of, Lady Bird’s own yearning to be ‘somewhere where culture is, like New York’. You know that even if she gets out she will still carry with her that suburban gaucherie, ineradicable but worthy. ‘You write about Sacramento so affectionately and with such care,’ remarks Sister Sarah Joan (a small role, fully realised by Lois Smith) upon reading her student’s college application essay. ‘Sure, I guess I pay attention,’ demurs the younger woman. ‘Don't you think maybe they are the same thing?’, replies the nun. ‘Love and attention?’

Lady Bird (Universal Pictures and A24), 93 minutes, written and directed by Greta Gerwig. In cinemas from February 15, 2018.