Leaves of Grass, Walt Whitman’s humanistic, wheeling manifesto of the American destiny underpins Australian playwright Joanna Murray-Smith’s one-man play, American Song, and the collection of poems form the credo and frame the questioning of its central character, Andy. The poems’ exploration of a world of natural beauty, sensual delight, and the limitless possibilities of a young country imbue his optimistic take on life. With Whitmanesque wonder, Andy shares his tale of early good fortune in winning the trifecta of a gorgeous girl, an adorable baby son, and, after adventures in New York and a period as a caring house-husband looking after infant Robbie, a great job in their home town.

Andy, played with an assured, Springsteen-like masculinity by Joe Petruzzi, is on stage as we enter the theatre, a stocky middle-aged man in a flannel shirt, with an open, honest face and capable hands. He is dressed for labour and the labour, a stretch of dry-stone wall stretching across the stage, is there to behold. (Here, Robert Frost’s 1914 poem ‘Mending Wall’ springs to mind).

The stage is littered with tools – a mallet, a hammer, a wheelbarrow – that speak of ancient skills and simple truths. It is an association reinforced by Tom Healey’s direction, which adds a rhythm to the monologue as Andy bends to choose a stone, straightens and turns, before placing it just so on the growing construction. The wall is a metaphor, of course; building a life but also building barriers; keeping some people out and others safe.

As the audience settles and the lights dim, he turns to us and asks a question. Can a wall be completely sound, Andy ponders, if the stones at the bottom aren’t quite right? If they’d been laid differently, or different stones used; would the outcome be different?

The question of chance ripples through the play. Intertwined with explicit references to Whitman is an implicit debt to Arthur Miller’s similar interrogation of his nation’s brindled values. Murray-Smith’s Andy, like Death of a Salesman’s Willy Loman, questions what it means to be a successful man, a father, a provider and protector. At the heart of both plays is a sense that those values have been devalued, even betrayed.

‘It all turns on a dime, doesn’t it? But what started it?’ Andy asks, unfolding his life story as he tries to make sense of the precise moment when things went awry. Was it because the natural order was inverted when he tended baby Robbie while Amy his wife finished her studies? Was he too caught up with work? Or maybe it was when he bought the gun for family protection?

As the anecdotes get darker, we see the flaws in the all-American male’s all-American dream; in Murray-Smith’s powerful writing, the building of a character and the collapse of his life are explored with a driving sense of compassion and impending doom. 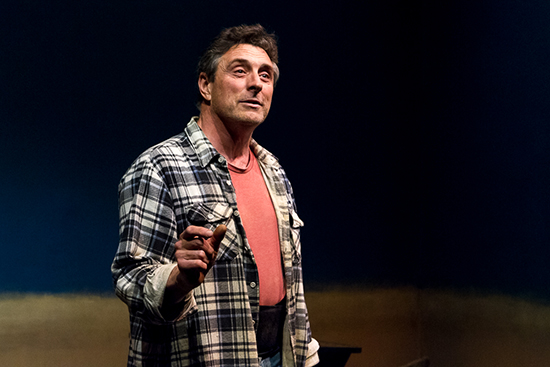 It is not a spoiler to say that this is a play about a mass killing. Australia last had one in 1996, at Port Arthur; America had its latest and largest on 1 October 2017, with the killing of fifty-nine concertgoers in Las Vegas. That Murray-Smith’s play should open in the same week gives it an added frisson. But in the United States mass shootings occur practically every month.

The play had its world première in March 2016 at the Milwaukee Repertory Theatre; it was commissioned by the company’s English artistic director, Mark Clements (who also directed the US première of Australian playwright Andrew Bovell’s Speaking in Tongues). American Song was intended to tackle the subject most likely to polarise American audiences. Andy’s ruminations on the wisdom of buying a gun and protecting his family has much more traction with an American audience than with an Australian one. It’s doubtful whether anyone in Red Stitch’s audience owns a handgun. Yet most people who see this play, whatever their nationality and whether a parent or not, can understand the weirdness of adolescence and the difficulty every parent has balancing rules with freedoms and getting the grumpy, grunting tenant who’s replaced your child to agree to boundaries.

Like Lionel Shriver’s novel We Need to Talk About Kevin (2003), this story is written from the perspective of an aggressor’s parent. Although very different in tone and particulars, it also deals with the bafflement of parenthood and the impossibility of anticipating the unimaginable.

Red Stitch’s production is as solid as a dry-stone wall, and there are no bum notes in Murray-Smith’s ear for mid-Western Americanisms and the philosophy they give voice to. Joe Petruzzi, despite groping for lines a couple of times on opening night, is compelling as Andy, the wounded romantic who can still ask ‘what happened to Whitman’s America? There is no unified song. There is no harmony of voices’.

We are left to ponder if there ever was.