In his introduction to the Folio Society edition of Twelfth Night, Peter Hall describes the play as a transitional work. Moving on from the light-heartedness of A Midsummer Night's Dream, in Twelfth Night Shakespeare mixes grief and cruelty in with the comedy. We are advancing towards the dark, complex world of Measure for Measure. Both Viola and Olivia are consumed with grief for the loss of their brothers. We are reminded again and again that life is fragile and brief that 'youth's a stuff will not endure'. The gulling of Malvolio, which starts as a simple jape, develops into something much harsher by the time we see him imprisoned and tormented. Even at the play's buoyant close Malvolio's final words, 'I'll be reveng'd on the whole pack of you', still hang in the air. If that were not enough, Shakespeare ends his comedy with a mournful and sardonic little ditty which reminds us that 'the rain it raineth every day'.

It is this darker subtext that is mostly lacking in Eamon Flack's bouncy production at Belvoir. In his program note Flack describes the actual Twelfth Night as a day of misrule and sees the play as a sort of saturnalian frenzy breaking through the dull normality of daily life. At the play's opening we are confronted with the cast in what appear to be hospital whites roaming the stage as though they were about to launch into Marat/Sade. 'It's a mad world my masters' Flack seems to be saying, and the lunatics are about to take over the asylum.

Flack's signature minimalist style works well for a play which needs no extraneous stage clutter. Nick Schlieper's lighting complements the rich colours, green floor, blue and gold backdrops, and pink wall of Michael Hankin's joyous set. Ilyria, the country in which the shipwrecked Viola finds herself, is a country of the imagination, and Stephen Curtis's witty costumes – the codpieces alone are splendid commentary on the characters – are riffs on Elizabethan dress. Twelfth Night is a play saturated with music, and Alan John's score and Caitlin Porter's sound design are vital elements in the production.

As Orsino, Damian Ryan launches the play with vigour. Too often Orsino is played as a languid fop, more in love with music and melancholy than his supposed paramour, Olivia. Ryan's commanding, virile Orsino is a man unused to being rebuffed, and it appears as though it is this challenge that makes him obsess about Olivia rather than any real passion. This makes it easier to believe in his sudden reversal of affection at the play's conclusion. It is a pity that the growing attraction between Orsino and Cesario, the disguised Viola, and Orsino's bewilderment at it is somewhat underplayed. 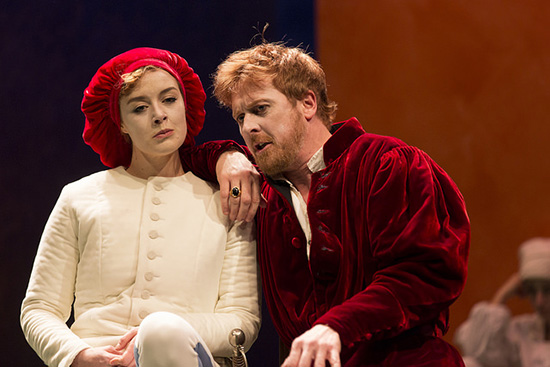 Nikki Shiels is an energetic, forthright Viola. She brings out both the comedy and the pathos of this young woman grieving at the loss of her brother, Sebastian, and disguised as a boy who 'cannot tell her love'. She has the measure of the verse and delivers the willow cabin speech beautifully without 'singing' it. Her confrontations with Olivia, the wonderful Anita Hegh, are much more aggressive and physical than usual, and her wonderment at the reappearance of her brother and her ability finally to disclose herself and admit her love for Orsino is moving.

Hegh's Olivia is a delight. She is hilarious as she shows us this black clad, stitched-up woman unravelling as her sexuality awakens and she lusts after the pretty youth Cesario. Her throaty, sexy 'most wonderful' as she beholds Viola and Sebastian together says it all. Sebastian is going to have his work cut out.

If there is a weakness in the production it shows itself surprisingly in the scenes between Olivia's kinsman Sir Toby Belch and his friend the foolish knight Sir Andrew Aguecheek. On paper the casting of those two splendid actors, John Howard and Anthony Phelan, promised much, but their scenes seem oddly unfocused. As their collaborator, Olivia's maid Maria, Lucia Mastrantone is a bright, dynamic presence.

There are two linchpins to this production. Peter Carroll's Malvolio and Keith Robinson's Feste. Carroll's white-faced, spindle-legged Malvolio is all Puritan rigour and officiousness in the early stages of the play, but when he is caught up in the spirit of misrule and is persuaded that his mistress Olivia is in love with him and would look kindly on him if he appeared smiling and in yellow cross-gartered stockings, he breaks loose with a vengeance. The sight of him capering to I Got Rhythm is not merely a highlight of this production, it's one of the great moments of this theatre season. Unlike many Malvolios, Carroll never plays for sympathy; he is self-righteous and unforgiving to the end, and his final threat is savage. He will be back. 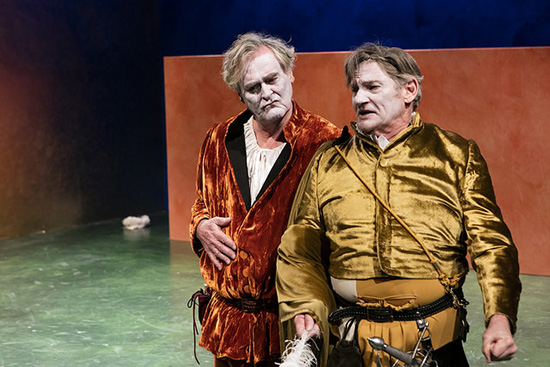 Of all the play's characters, it is the clown Feste who holds the balance between comedy and the darker elements. The clown who must entertain those whose failings he sees clearly is a staple of Shakespearean drama, and Robinson's sardonic delivery makes it obvious that he has the measure of all the others. Sensibly, Flack has let him make supposedly ad lib comments on some of the more obscure jokes, which Robinson does with relish. The venom with which he confronts Malvolio at the play's close is startling. This is not a man to cross. An auto-immune condition has confined Robinson to a wheelchair, but there is nothing confined about his performance. Feste's songs have been imaginatively shared among the cast. It is perhaps the most profound pleasure of this entertaining production to be able to witness this remarkable actor's return to Belvoir.